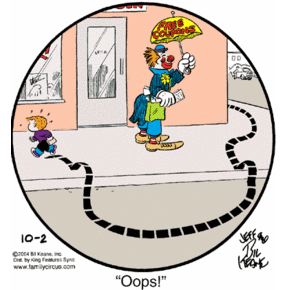 Hey, the dotted lines are back! And in the daily panel, no less! That’s great. It gives you something to latch onto in this panel, in which nothing else seems to have any meaning or purpose. You see, Jeffy goes around the clown because, well, because he doesn’t want a free coupon, I guess. And he’s sweating because … clowns are scary? And he says “Oops!” because … well, I have no idea why he says that. And he’s holding something in his hand, but it’s way too small for me to tell what it is. And when’s the last time you saw a clown in full get-up handing out free coupons? Usually they’re passed out by bored college students/homeless people. Unless there’s a big to-do or something. True story: On the day that Star Wars Episode I premiered, I walked by a theater where it was showing, and among the mob outside was a hapless individual dressed up as a giant cup of yogurt who was passing out free yogurt samples. Poor bastard. My friend and I actually got to go in and see the movie for free because some disgusted nerds who had bought tickets to every show playing that evening refused to see it again after the first time and were just handing them out to people. After we saw it, we understood why. We didn’t take any yogurt samples either. But, back to my point, which is as follows: today’s Family Circus — what the hell? I thank you for your time.