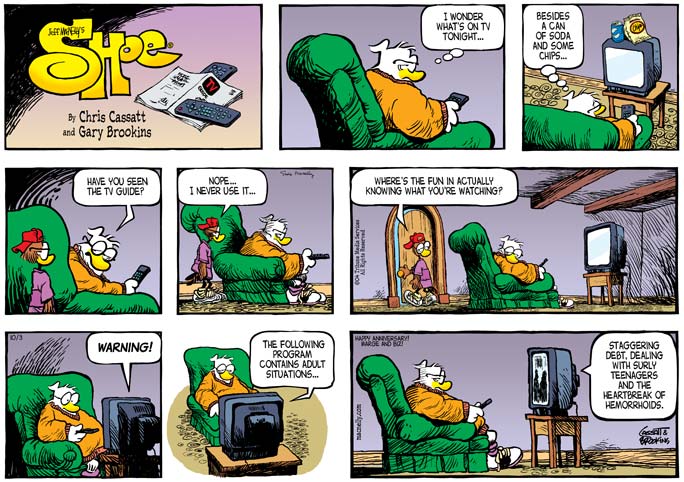 Due to newspapers’ pernicious habit of intermittently cutting off the top of some Sunday strips, comic artists can never be sure that the first two panels of their weekly color installment will make it into any given paper, which means that they generally use that space for some throwaway gag. If you do get these intro panels, then you often end up with two punchlines in one strip. Maybe the journalistic cabal is planning even more drastic surgery to the Sunday funnies, though, because today’s Shoe seems designed to survive being cut into three pieces if necessary. In addition, the short-short-long configuration of panels in both the second and third row will allow the strip to be crammed into whatever space a heartless layout designer can devise.

However, like a squat military transport vehicle that’s designed to maintain structural integrity no matter what violence is done to it, the resulting strip isn’t pretty. Instead of one funny punchline, we’re subjected to three sort-of funny ones, including one (the third) that was done better years ago in Calvin and Hobbes. I do have to admit though that I like the solid exposed ceiling beams that have had so much loving attention mysteriously lavished on them in the third panel of the second row. Also, in this strip we learn that Cosmo likes to lounge around the house wearing saddle shoes. A good sign that I’m a comics junkie is that I love finding details like this even in strips that aren’t “funny” per se.

This is a good as time as any to point out the fact that Skyler is mysteriously a ward of his Uncle Cosmo rather than, say, his parents, which is honestly part of a larger comics trend. Of course, actual families produced the old-fashioned way abound in the comics, but still, there are a much larger number of uncle-nephew households in the comics pages and cartoons in general than there are in the real world. I’m assuming that this is to prevent us from having to ever imagine Cosmo (for instance) having sex, which, quite frankly, is a blessing. Those comics artists know their stuff.