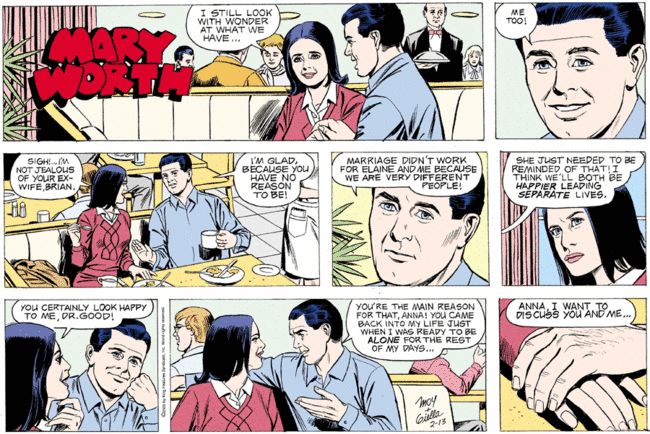 Now, I know what you’ve been thinking: “Apartment 3-G and Mark Trail are all well and good, but what really packs ’em in the seats is Mary Worth. So where’s she been, huh?” Well, while Mark’s been battling sharks and drug runners, and Apartment 3-G has been all pregnant high schoolers and white slavery, exactly nothing of any even remote interest has been happening in the excruciating slow-motion romance of Anna and Dr. Brian. After something like ten weeks of cow eyes and Richard Bach quotes, at the beginning of February things finally seemed to be looking up when Brian’s high-powered lawyer ex-wife declared her intention to win his love back by any means necessary. However, her efforts fizzled in less than a week (which in Mary Worth chronology is an increment of time so brief that it can only be measured by the most precise atomic clocks) when Brian reminded her that they got divorced because they didn’t get along and had different interests. I’m glad she’s not my lawyer. (“And isn’t true that you lied about seeing my client at the crime scene?” “Objection, your honor!” “Oh, never mind, he’s guilty anyway.”) Then, as Dr. Brian said his final good-bye to his ex, they engaged in a brief, post-marital hug, which Anna spied; this raised the spectre of that least exciting of romantic complications, the Big Misunderstanding. However, after another brief week, Anna had bought her beau’s explanation, and horrid, treacly bliss was restored. Unless Brian’s ex is lurking back at his place with a gun, it looks like smooth sailing until the wedding, which should take place sometime in 2009.

A couple of artistic notes: We all know about Anna’s chameleon-like nature, but the woman in the rightmost panel in the second row is not the same woman who’s in the other panels of this strip. That version of Anna seems to be thinking: “The collagen injections into my lips didn’t go so well, but I’m not sure how to react.” Meanwhile, “happy” isn’t how I would describe the good doctor’s expression in the leftmost panel of the bottom row. I believe the word that Anna is looking for is “smug.”