Curtis may have been a little late in celebrating Charles Schulz’s 100th birthday, but it’s making up for lost time with a whole week of beloved Peanuts character Franklin tutoring the strip’s education-resistent title character. They’re going to the always reliable joke of “this art style’s specific stylizations would look baffling and grotesque in the context of another art style with a different set of stylizations, were characters from the two universes to coexist.” Curtis may be focused on Franklin’s huge mouth, but I’m more weirded out by his mohawk. I guess if you 3D-modeled Franklin based on the original drawings, you’d come to the conclusion that he had a mohawk, but I don’t think he had a mohawk.

I was pretty mad at Beetle’s response in the first panel when I read it, to be honest. Why does it have to have something to do with you, Beetle? Why can’t your girlfriend just tell you something interesting about her workplace and her day, huh? But then in the second panel it quickly becomes clear that their relationship is in fact wholly transactional, which frankly is a real downer. 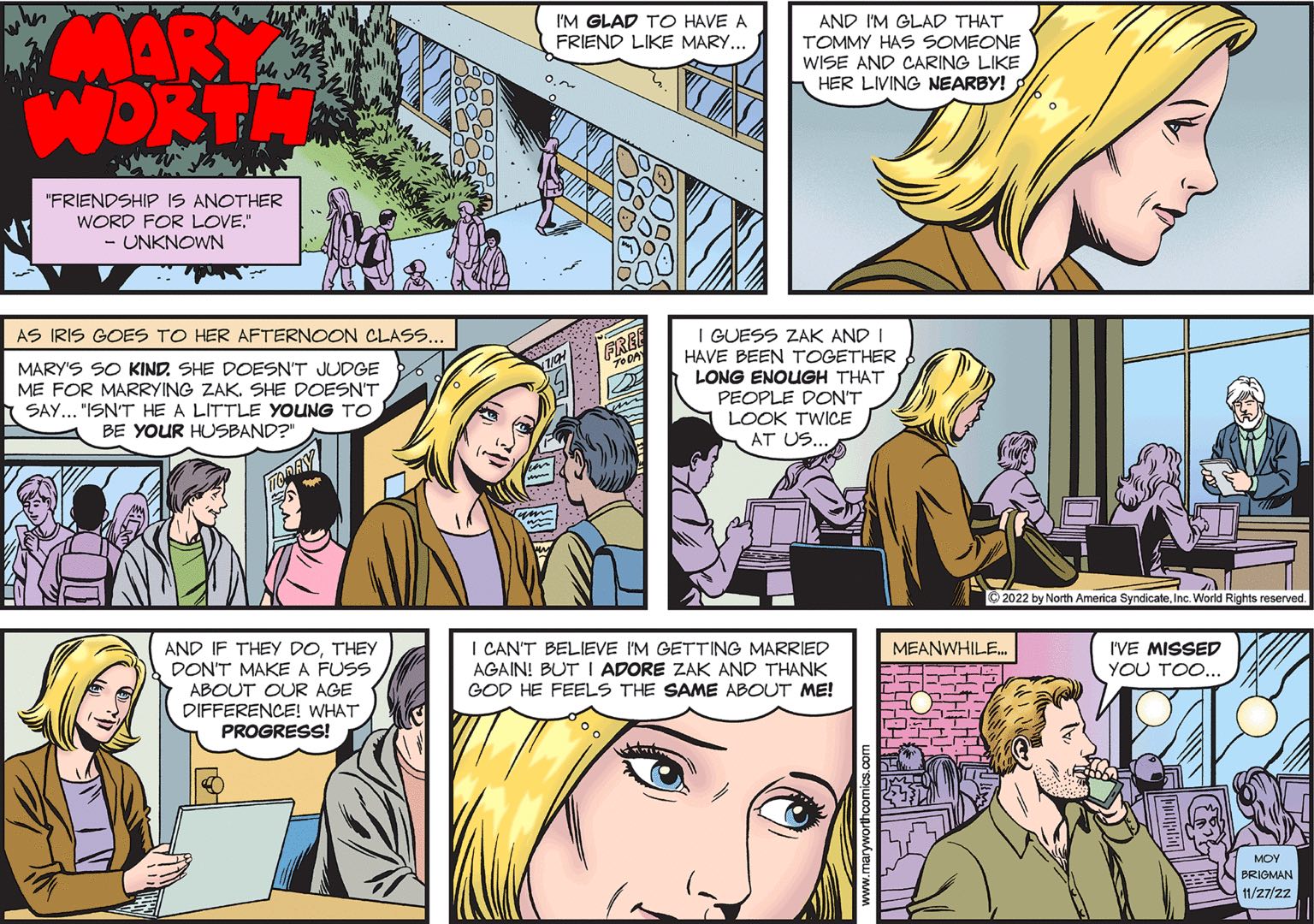 Ah, this is the point in the Mary Worth storyline where all the characters have been chirpily telling each other how great everything is for weeks until we, the readers, want to die, but then we hit a sudden shocking twist: what if things … aren’t great? Aren’t great at all? What if there’s a certain someone from Zak’s past that’s he’s ben missing all these years? That would be quite a development! Remember, Zak used to have an age-appropriate friend group, but I guess they abandoned him when his dumb girlfriend started hanging around him all the time, so maybe it’s one of them? On the other hand, maybe it’s Wilbur. Wilbur and Zak used to hang out! Zak thinks Wilbur is pretty cool, which is deeply troubling!

Wow, Loweezy looks genuinely distressed in the second throwaway panel here, doesn’t she? Please, Snuffy, you’ve got to get up and hunt! Your family has no money and is on the brink of starvation!

I have to say that I’m proud of our girl Iris here: the fact that she was almost dragged to her death by the weight of her hunky boyfriend’s rippling muscles is intrinsically far more interesting than the fact that she later accepted his marriage proposal, and she’s right to lead with it. I’ll even allow her to imply that the big story was her own potential doom, which seemed a lot less likely thank Zak’s, if only because it’ll rattle Mary’s cage a little. “That’s right, Mary, I’m out there getting that high you can only get by staring your own mortality in the face. What’s the closest you’ve ever come to meeting your maker lately? Letting Dr. Jeff steer the boat when he’s had two Michelob Ultras?” 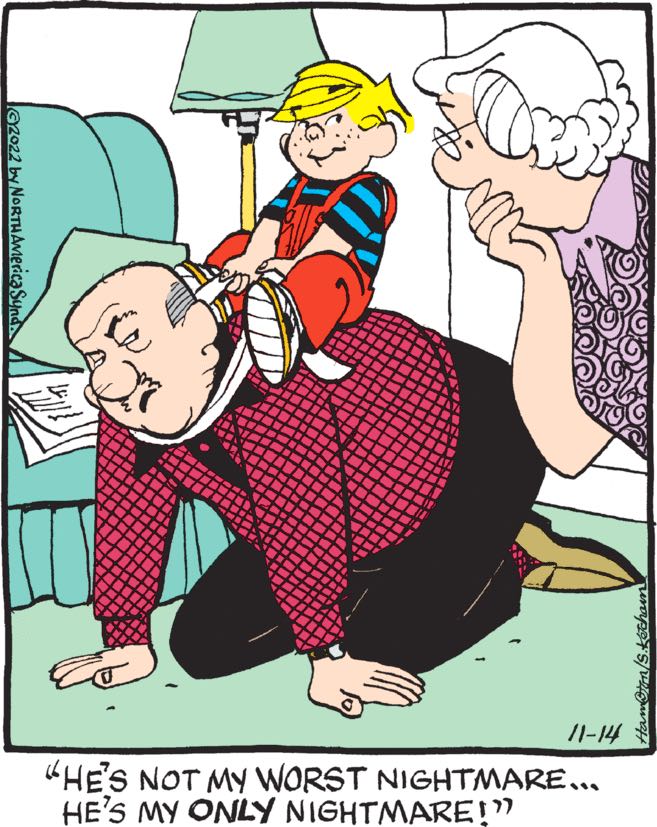 This is definitely one of the grimmest panels Dennis the Menace has ever done. Every night Mr. Wilson has one nightmare, the same one that also occupies his every waking moment. Keep pulling on whatever you’ve wrapped around his neck, Dennis, and put him out his misery.

A fun fact about Dustin, the newspaper comic strip about the conflicts between feckless young people and their older family members who genuinely despite them, is that it’s one of the newer comics in the syndicated world and yet was also launched in 2010, which I regret to inform you was a full 12 years ago at this point. Now, in 2010, would a storyline about a young person trying out this new “blogging” business make sense? Sure, barely. Does it now, in the year of our lord 2022? Let me assure you that it very much does not. As America’s #1 newspaper comics blogger, I am uniquely positioned to deliver this sad news. 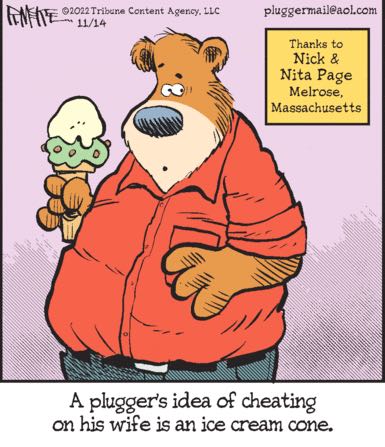 ME [in a room full of high-powered Hollywood executives/perverts]: Gentlemen, it’s been more than 20 years since we made history with American Pie, the story of a teenage boy who fucks a pie. America’s gotten a lot weirder since then. So what if, for our next move… [I advance the PowerPoint slide deck to reveal “PLUGGERS: THE MOVIE: A BEAR FUCKS AN ICE CREAM CONE”] [the Hollywood perverts shower me with $100 bills]