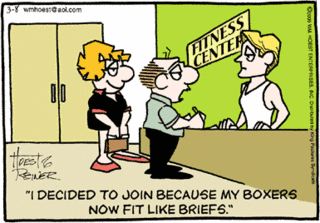 Today’s Lockhorns isn’t particularly cruel, but is notable: I think this is the first time I’ve ever seen Loretta in a good mood as a result of something Leroy’s done. I’m going to give her the benefit of the doubt and guess that she’s actually pleased that he’s going to get into shape, not because he’s just embarrassed himself in front of the himbo behind the counter. Leroy, of course, has no illusions about his chances of becoming buff; his own grim visage indicates not only his foreknowledge of his own personal failure, but also that he realizes that Loretta’s disappointment will be all the bitterer because her hopes were once ever-so-briefly lifted. Our muscled he-clerk, meanwhile, seems gripped by the soul-sucking listlessness that affects nearly everyone who has the misfortune to wander into the same frame as the Lockhorns. Presumably the two of them are so fundamentally unhappy that their ennui radiates off of them in infectious waves.