Now, those of you have been following this blog know that I love Gil Thorp for its deranged, coked-up pacing, its bizarre hairstyles, and its transformation of the jocks who persecuted me in high school to a parade of morons who dance about for my amusement. That’s why I feel justified by saying, with love and affection, that the art is really, really bad. I mean, really. Take a look at everyone’s favorite “dealer” (and events have proven that he’s just a card shark, not a drug pusher), Hutch Renfro, from his first appearance a few weeks ago: 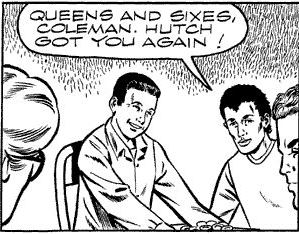 I’m assuming from context that the dude inviting the gamblers inside in panel one of today’s strip is the self-same Hutch, even though there are differences that make it hard to be sure; for one thing, his forehead seems to have expanded into Star Trek alien territory. If half the attention that has been lavished on the door’s wood grain had been applied to Renfro’s face, this would be a lot easier to follow. Then he proceeds to morph into someone else entirely in panels two and three, assuming he’s the guy to the right of easy-to-identify dorkwad Steve Luhm. He mainly seems to be getting beefier and beefier with each passing moment, so maybe this plotline will involve steroids after all. Or gamma radiation! A Hulk-Gil Thorp crossover! That I’d pay good money to see.