Ha ha, ladies, amiright folks? They definitely be shopping, and they also be using their purse for its intended purpose of carrying things around rather than just leaving it empty!

Oh, right, in addition to the Vic and Doug storylines, this Gil Thorp basketball season also features a girl’s basketball storyline, about beloved (?) new Mudlark Corina Karenna, and how maybe she has some beef against Tessi Milton that she displays by sassing her in very mild ways like calling her by her last name, or maybe she’s just mildly sassy in general, who can say. Anyway, I’m definitely not saying that girls’ Gil Thorp storylines are less interesting than boys’ i>Gil Thorp storylines in a larger abstract sense, but I am going to say that Corina needs to get sassier by like two orders of magnitude if she wants to compete with Vic’s hot dog giveaways for my attention.

We’re now in the midst of what I call the “fun and games” section of a Gil Thorp storyline, where everyone’s zany character premises are given free reign to run wild before some inevitable conflict results. In the current case, we have newly minted PA announcer Vic Doucette getting drunk with power and arranging hot dog giveaways on his own initiative, and car fanatic Doug Guthrie continuing to be a fanatic about cars in any given context. Presumably these two are in for a fall soon enough, when Coach Thorp tells Vic that it’s all well and good for a nerd to offer supporting services to jocks but he needs to keep in mind that jocks are the reason we’re all here so let’s keep the focus on them and Doug gets caught up in a car-fucking scandal, respectively.

Oh, I didn’t talk about it here, but Crankshaft’s beloved Beans End catalog didn’t go out of business after all, but instead got absorbed by Buddyblog, the Funkyverse’s catch-all Internet company whose primary business seems to be demonstrating that the Internet in particular and young people in general are bad, actually. Anyway, remember how it used to be a whole big thing in this strip that Crankshaft overcame illiteracy as an older adult? Well, cut him some slack, Lillian, maybe he’s never going to read cozy mysteries for fun, just let him enjoy his damn gardening catalog in peace without judgement. 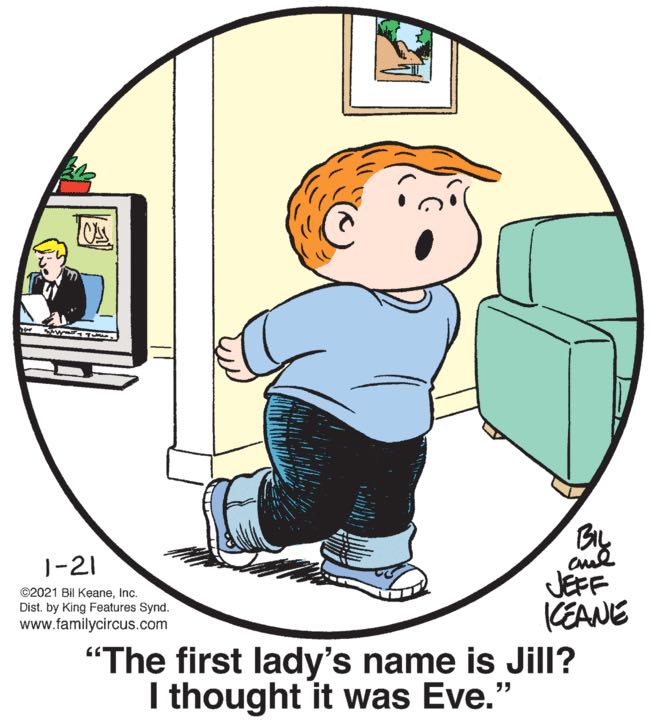 You couldn’t pay enough to go look it up, but I’m willing to guess that this joke, slightly modified, has run in newspapers on quite a few January 21sts over the years, and while normally I would roll my eyes at yet another moronic Jeffyism, I have to say that it’s nice to see that, after a few violent hiccups, the hallowed ceremonies that surround the presidential transfer of power are proceeding as scheduled.

“It’s almost like she … doesn’t want to talk to me? But that can’t be right.”

As a man born in 1974 and thus smack in the middle of the Gen X cohort, I have been mostly safe during the raging Millennial vs. Boomer wars, and have thus been able to take a sort of detached view of them. One of the conclusions I’ve come to is that we’re way too free and easy with generational essentialism when we should just be engaging in basic agism. To put it another way, a lot of the stereotypes about how “Millennials suck” or “Boomers suck” are actually just ways in which young people and old people suck, respectively, and how they’ve always sucked no matter what year they were born, and in fact many of the ways Boomers suck now are the ways in which Millennials will suck in 30 years or so.

Anyway, a particularly pernicious habit of the agèd is the belief that their fondly remembered youth in particular is not just particularly vivid in their mind because that was when they were young and their life was full of promise, but because it was in fact the most important historical moment during which anyone could ever have been young, and young people today should get into all the pop culture signifiers today’s old people remember so fondly. This is fully universal and mostly harmless: like almost everybody, for instance, I am very convinced that our civilization’s music just happened to hit the peak of its creativity when I was between 18 and 25 years old.

Because most newspaper comics are written by and for Baby Boomers, you get a version of this in which every adult was a hippie as a teenager and went to discos as a young adult and no subsequent cultural trends are worth talking about, really. But if we Gen Xers are going to resist the siren song of pluggerdom, we really need to watch ourselves from falling into this same trap. Like, the last time I really followed basketball was the in the era under discussion here, and though my favs were the lovable, goonish Oakley-Ewing-Starks-Mason-era Knicks, “Joe Duuu-mars” is definitely like one of Proust’s madeleines to me. But, like, I’m given to understand that today’s NBA is a vibrant, beloved league that has its own set of superstars and characters and hangers-on. If I met an actual teen who was fixated on early the early ’90s NBA, I would feel mingled amusement and pity, and if I were writing a teen character and thought “I’m gonna have this kid be obsessed with things from when I was a kid,” I would hope someone would talk me out of it.

Way back when the New York Times first experimented with a paywall, back in the late ’00s, they kept their news coverage free but you had to pay to read their opinion columnists. This struck me as an insane choice, both in terms of what the market valued and how much labor went into each product — even back then it was obvious that investigative journalism took a lot of resources to produce whereas literally any asshole on the internet, yours truly included, is more than willing to offer semi-informed opinions for free — so I have always assumed that the decision actually reflected the internal hierarchy at the paper, in which columnists are better paid and have more prestige despite doing less work because they’re considered “thought leaders” or whatever. Anyway, Shoe may be a longstanding legacy comics about clinically depressed talking birds, but I’ll take my pointed media analysis where I can get it. (The Times eventually figured out what people will really shell out for: recipes and the crossword puzzle.)

Since we last checked in with Mark Trail, he stole his dad’s manatee-harming speedboat and got into some fisticuffs with Trail family henchmen (?). But now he has to face an existential dilemma: does he get into a speedboat chase with the police? Seems unlikely, but remember, Mark absolutely punched a cop in the face one time, and sure, that was just to rescue Rusty, who was stuck under a car, but it’s a slippery slope, and I think we can all agree that manatees are much cuter than Rusty. 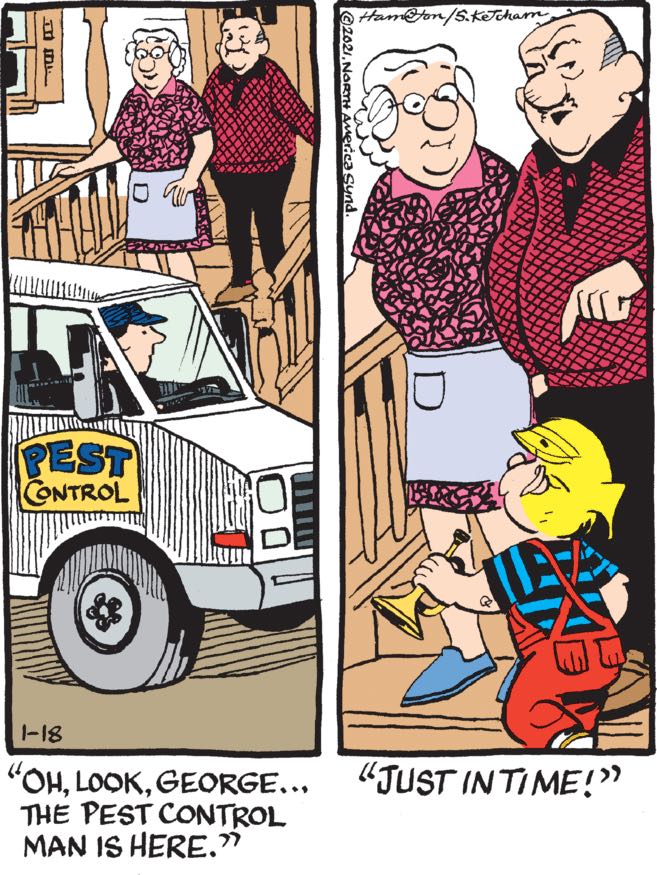