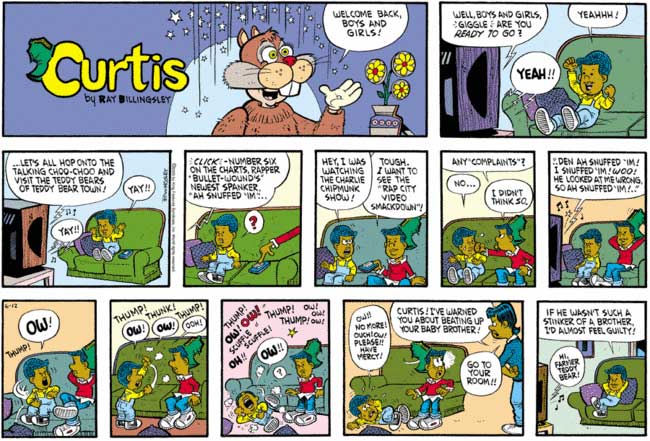 Yeah! Woo! I put quotation marks around “rap,” of course, as an homage to Curtis’ tendency to put quotation marks around “rap,” along with almost anything else, including, in this strip, “complaints” and “Bullet-Wound’s” (and what’s with the hyphen? Is he an 18th century rapper or something?). Bizarrely, the word “spanker” in panel four is left unquoted.

The question that really gets me in this strip, though, is: how old is Barry supposed to be, anyway? I mean, Curtis may be about three years too young to be listening to the ultraviolent stylings of Bullet-Wound and Fortyounce and what have you, but I have Barry pegged at about three years too old to be shouting “yay” at the choo-choos and the teddy bear town and all that sugary crap. And incidentally, the top two panels of this strip were cut off by my paper, so I was severely traumatized when I downloaded this strip and actually saw Charlie Chipmunk in the flesh. If I had a little brother who insisted on watching this, I might have a very strong urge to, well, snuff ‘im.