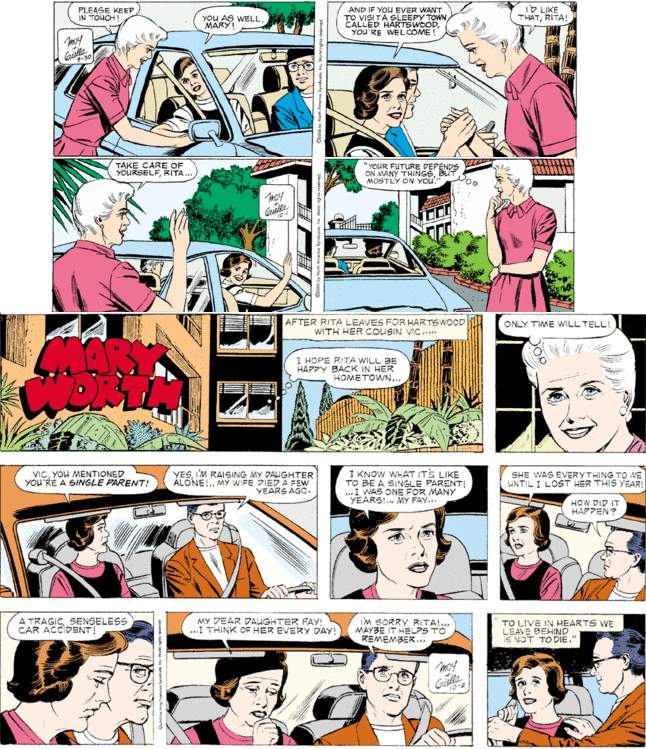 This is how Mary Worth’s alcohol-driven storyline ends: not with a booze-fueled, police-intervention-requiring bang, but with a sober (or, perhaps, dry drunk), platitude-drenched whimper. As Rita and Vic motor off in his Mood Car (like his suit, it shifts from melancholy blue during the goodbyes to hopeful brown as they head towards Rita’s new small-town hideaway), I can’t help but wish that we had seen a little more cussing and public humiliation of Mary and Jeff, and a lot less forgiveness and overcoming of adversity.

Nevertheless, things do seem to have wrapped up awfully neatly. Rita even now has a substitute Fay to smother with affection and make freaky puppets with; this will save her from liquoring up Vic and forcing him to sire some mutated incest-child on her in order to fill the emptiness that Fay’s death has left in her codependent soul. We’re probably not meant to contemplate the many, many loose ends (Will Rita relapse? Won’t the suffocating atmosphere of small-town life leave her with nothing to do but drown her sorrows in the bottle? Does the interlude at the Women’s Shelter prove that Mary hates and fears poor people above all others? Is Dr. Jeff finally going to get laid?) so instead I’ll just pose this question to you all, on the subject of “inappropriate” quotation marks: why do aphorisms one (“Your future depends on many things, but mostly on you!”) and three “To live in hearts we leave behind is not die!”) get quotes around them, but not number two (“Only time will tell!”)? Perhaps Mary’s mind is so cliche-o-riffic that she can’t even tell the difference between platitudes and her actual thought process anymore.

I would be remiss without showcasing this comment on Friday’s strip from Dennis Jimenez: “I like the soul shake there in panel two. The sistas at the womenâ€™s shelter must have taught ’em that. Right on!”