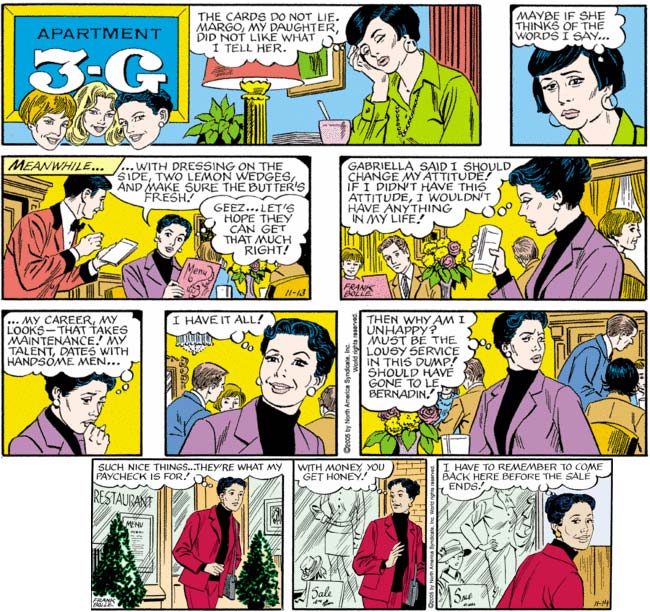 Isn’t it intriguing that Mary Worth, Mark Trail, and Apartment 3-G all wrapped up storylines almost simultaneously? And while the first two strips have launched into their new inane plots (Divorce Court: Hand vs. Hand and I Can’t Believe It’s Not Extinct!, respectively), Apartment 3-G has been taking its sweet time getting into gear. Mainly, instead, we’ve been treated to a Margo Magee character study, and that character is not exactly pleasant. Perhaps this is meant to serve to get new readers up to speed on the black, black heart that beats beneath Margo’s perky bosom. It’s been fun watching her alternately taunt those worthy of her scorn (her comical immigrant mother, her long-suffering roommates, the working poor) and wallow in shameless materialism, but it’s hard to see where we’re going to go from here. Maybe on her way home she’ll beat a puppy to death with one of her $500 Manolo Blahnik shoes, just for laughs.

Hopefully the other two Apartment 3-G roomies will get their own meandering, thought-balloon-heavy character establishment bits in the near future. Lu Ann’s will feature her wandering, wide-eyed and baffled, throughout the city, alternately walking into things and swooning over intercheangable WASPy dark-haired men in suits. Tommie’s will take maybe two strips to finish — one if it’s on Sunday.

A few commentors felt that “With money, you get honey” was a merchandise-worthy epigram. I’m more inclined to “My looks — that takes maintenance!” If only CafePress sold makeup mirrors.