I apologize for not posting this sooner, but I did want to note that Margaret Shulock, who was one of the founding Six Chix, and, perhaps more importantly for the history of this blog, the longtime writer of Apartment 3-G, passed away last month. The Daily Cartoonist has a good obituary (which notes that she was a gag writer for Snuffy Smith as well). I dearly loved and miss her work on Apartment 3-G, and I hope she knew how many of us enjoyed it.

Anyway! Let us smile, and move on, with our comment of the week!

“Wilbur took Pierre to the dog park one time and it immediately landed him multiple dates with a woman to whom he was attracted, which Wilbur then screwed up completely of his own accord. Pierre can do his job. The dog situation has been going just fine. The problem is, as always, the Wilbur situation.” –jroggs

Our runners up are also funny!

“Sure, Dennis could go to college and study science if he wants to become an astronaut. Or, he could drop out of college, start a billion-dollar internet business, and pay for his own rocket ship. Did you ever think of that, Margaret? Well, don’t worry, adult Dennis isn’t about to do either one when he’s selling knockoff pot gummies in the alley behind the car wash.” –BigTed

“‘The past is never the past. It is always the present’ is the kind of thing people say when they’re as baked as Estelle looks in panel three.” –Hibbleton

“‘November Halloween plot’ is that special touch you only get from strips that have lasted maybe 20 years longer than the point at which, if they were human, you’d gently stop letting them drive.” –Dan

“Pam makes a classic rookie mistake, asking Ed what he’s doing. Look, Pam, the computer is keeping your dad occupied. That’s enough. Will it have devastating legal and financial consequences down the line? Possibly. But that’s tomorrow’s problem.” –Joe Blevins

“Pretty subdued start to the weeks long Crock Finale arc where, their shoddy cistern having suddenly been drained of water, the inhabitants of the fort all succumb to dehydration and madness, turning on each other before abandoning the fort to … whatever they were out there to hold it against in the first place, maybe these two guys?” –BananaSam

“How could you miss: ‘They tell us whut ther runnin’ fer — ah wanna see what they’ll run from!’ I mean, it’s right there! I guess Snuffy’s laziness extends to punchlines.” –Pozzo

“Unlike in TV shows in which everyone sits on one side of the table with their faces to the camera no matter how unrealistic it looks, the Mary Worth artist breaks convention to spare the audience Wilbur’s visage. We, the audience, thank you.” –georgiabob

“For Pete’s sake, is Lois’s life so boring that she’s taken to sneaking up on her baby just to freak her out? ‘Hmmm, I would rate the subject’s startle response at a reaction time of +8, with a standard 25% flinch presentation. No crying, just pouting this time. Is the subject becoming desensitized? The contents of her diaper may provide the answer at some point. Perhaps a more aggressive form of peek-a-boo at bedtime is in order.’” –made of wince

“Wilson. THIS IS YOUR CHANCE, Wilson. Tell him yes. Tell him that yes, forever he should be quiet, never make another sound, this is your FOOT you’re dealing with here, does Dennis want you to lose your foot? Well, DOES HE?! The door is open, Wilson. The door. Is open. All you have to do is raise those pins and needles and hop on through. Don’t screw this up.” –els

“Haha, Wilbur’s on the verge of tears, but it’s not stopping him from shoveling more spaghetti (?) in his mouth with a fork he’s holding like a pencil, presumably so it won’t slip from his grasp when it’s made slippery by his tears. He’s so good at this it’s almost as if crying during mealtimes is a regular occurrence for him!” –Thelonious_Nick

“A beatnik, eh? Gotta say, I admire Tribune’s commitment to raising its artists and writers in a remote commune and allowing popular culture to trickle through at a pace that makes glaciers envious.” –Tabby Lavalamp

“There is only one hermeneutical principle necessary for interpreting any given Six Chix, which is to ask yourself: how many magic mushrooms the artist has been ingesting. Today’s outing: 3 grams, tripping balls, very psilocybin. (Not being a mushroom kind of guy myself, I had to do a little research for this comment. A quick Google search brought up a mushroom dispensary as the second result. Not for the first or last time, a mudge has gone on an FBI list for the sake of a joke! We do it all for the love of you.)” –pastordan

“Klik! Oh. I hope today wasn’t the the day the boss volunteered to drive orphans and puppies to the amusement park.” –Voshkod

“I dunno, Mary. Wilbur expressed his emotions when he got mad at Libby and when he told Carol he still had feelings for Estelle. If anything, he should try keeping his emotions to himself.” –Flipper

“‘I hate it when they serve fish with the head on it.’ ‘Then why did you order the whole sea bass?’ ‘I needed an excuse to leave a lousy tip.’” –Rube

Folks! Faithful reader/commenter Tiami has spotted an extremely important survey from King Features, which is gauging interest on classic strips that might be relaunched with new creative teams, and one of them is my beloved Apartment 3-G! There’s others on the list that you may or may not feel strongly about, but I require you to vote for A3G as well. Here’s the survey! And here’s me forcing you to vote for a return to Margo, Lu Ann, and Tommie’s antics, with my mind: 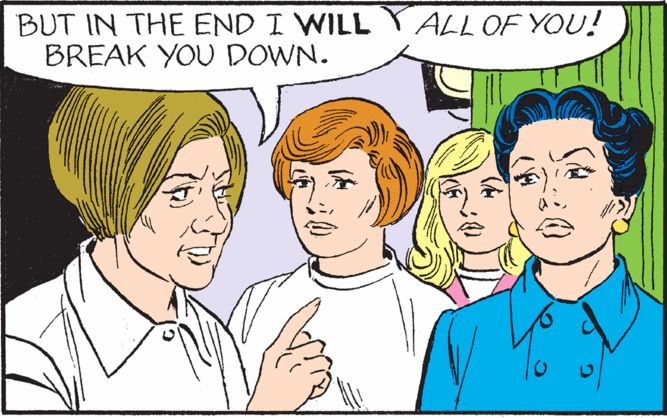 You know, last week when I accidentally mistook this storyline’s antagonist for Dr. Strange, some people got mad at me. How dare I call myself the Comics Curmudgeon when I can’t even properly curmudgeon about prominent comics characters! Well, joke’s on you people: I care a million times more about Mary Worth than I do about anything that happened in a superhero comic book ever. The fun thing about reading Newspaper Spider-Man for me is having really no preconceptions about what exactly is supposed to be happening at any given moment. Like, if I had been paying attention to the Marvel universe at all the I wouldn’t have the joyful moment of discovery today when I learned that Dr. Strange’s name is Stephen. Steve! Steve Strange! Oh, this is a delight.

“That’s great, Mary, great. You always have friends. I never have to worry about you being lonely. I just, sometimes … how come nobody ever worries about me? Poor, lonely Dr. Jeff. You were gone, what, six weeks? Eight? I just … I get tired, you know. Tired of this life. I gotta … I’m just gonna rest my forehead on the steering wheel for a few minutes. Just rest my eyes. Wave the other cars around us, OK?” 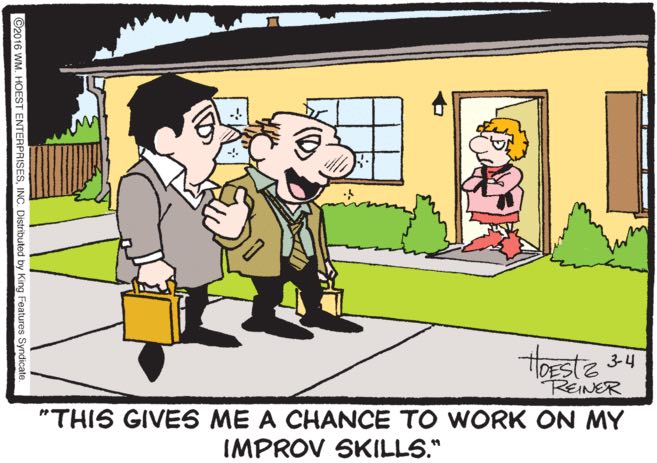 If there aren’t a half-dozen improv teams named Drunk Leroy Lockhorn formed by the middle of next week, I’m going to be very disappointed.