When we last saw Wilbur’s beau Iris, she had mousy brown hair, a Victorian governess’s vocabulary, and some sort of black goo all over the middle of her face: 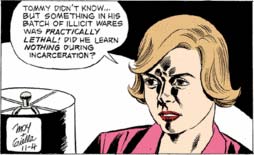 Since that time, we Mary-watchers have been on a magical mystery tour of honeymoon babies and drunken, clingy houseguests. But what’s Iris been up to? How’s she reacted to the incarceration of her two-time loser of a meth-dealing son?

Well, apparently she’s feeling better. Not only has she had some deep cleansing work done on her pores, but her hair’s been peroxided up like a Ukrainian mail-order bride’s. Yes, she’s been transformed from gloomy to sunny by a little Miss Clairol and a lot of the love of a good man!

By which I mean Wilbur.

Who appears to be stabbing himself in the throat with an undersized matzo ball. Or possibly a kumquat. It’s hard to tell.

Either way, he’s a real winner.

Apparently Iris and Wilbur’s relationship has advanced to the point where she feels free to correct him on his life’s work. Wilbur’s sour face in the first panel isn’t just a result of his accidentally jabbing himself in the Adam’s apple with some indistinguishable bite-sized taupe morsel: it’s reflective of his advice columnist M.O. “Yeah, it seems like your marriage is pretty much doomed.” “Peer pressure is tough when you’re a kid; if you want to have friends, you’re just going to have to drink, smoke, and put out.” “Gosh, your life doesn’t really sound to me like it’s worth living — have you considered suicide?” Perhaps his beblonded lady friend will help him turn that attitude around. Will he follow her advice — or reconsider his union?