Holy crap but that’s a scary word balloon. It doesn’t just have icicles; it has slime-dripping tentacles, like a floating jellyfish of scorn. Watch out, Eskimo-kissing couple in the background (or, alternately, waiter with poor sense of personal space and startled restaurant patron)! Margo’s octopus of disdain has been unleashed, and there’s no stopping it!

The weirdest thing about it is that in the previous panel, she has a carefree look on her face, almost a half-smile, as she sums up Scott’s romantic MO; then she suddenly pulls an emotional 180 and whips out the Death Yowl. Maybe it’s because she has to consciously remind herself to care about the feelings of others: first she’s sort of amused and vaguely charmed by Scott’s destructive romanticism, then realizes that she’s supposed to find his antics distasteful, so she overcompensates. Either that, or in panel three she’s suddenly possessed by the demon Astaroth — and Astaroth doesn’t like men who can’t really commit themselves emotionally. 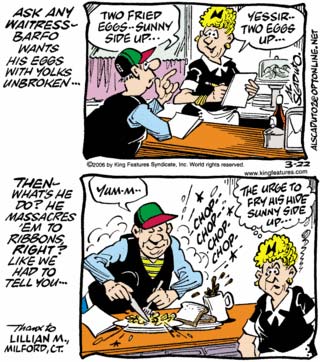 I think I’m starting to feel the same sick-and-wrong love for TDIET that I feel for the Lockhorns. There’s something so very human about the endless stream of petty slights blown all out of proportion and served up lukewarm for our approbation. Though none of the incidents portrayed in any instance of this hateful comic are worth spending more than five minutes of any rational person’s time grumbling about, it nevertheless cheerfully inflates them up into terrible injustices worthy of mass letter-writing campaigns, all without a trace of irony or self-awareness. In this way, it only reflects the human animal’s endless capability for self-regard and self-righteousness. I wonder if the fact that you can now e-mail your petty gripe to the artist, instead of actually needing to write a letter about it, has brought the subject matter to new levels of pointlessness.

Today’s example seems particularly egregious, and not just because it features a guy named “Barfo”: apparently “Lillian M.” believes that any food not served up in the form of a puree or mash ought to be either swallowed whole or laminated and put on display in a temperature-controlled case. I know that being a waiter or waitress is a thankless job, and it certainly isn’t one I’d be cut out for, but if seeing a customer take a knife and fork to food makes you want to burn him alive, maybe you need to take some time off.