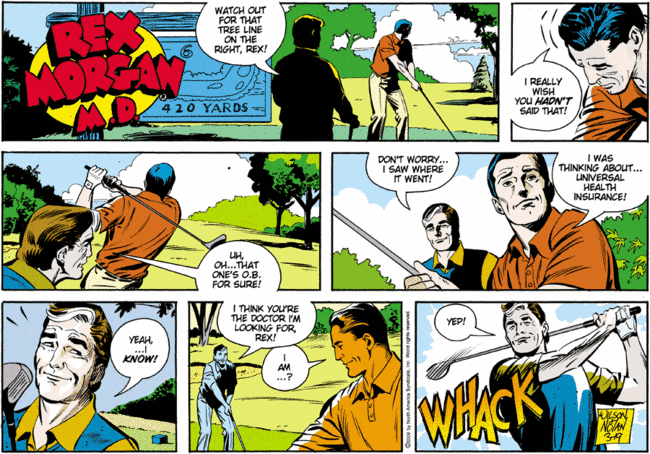 For once, I’m not going to use a discussion of Rex Morgan, M.D., to impugn the title character’s heterosexuality. Instead, I want to draw your attention to the good doctor’s facial expression in the second panel of the second row. Have we ever seen Rex look more melancholy than he does at that moment? The ellipsis between “about” and “universal” seems to speak volumes. What’s going on behind those troubled, blandly handsome features? Is he thinking of a better world, where medical costs are controlled by social contract and doctors can pursue their calling without worrying about the profit motive? Is he thinking of all the patients who get inadequate care because they aren’t fully insured? Uninsured patients like a certain sexy blond archaeologist … who needed help with his hand, and then his head … and then his heart … and who just left like he was never there, unmarked except for the terrible emptiness he left in Rex’s innermost soul …

Oh, wait, I said I wasn’t going to talk about this, didn’t I? Sorry about that.

I’m beginning to wonder if Dr. Troy is less medical socialist and more golf shark. After all, Rex was wiping up the links with him until he dropped the UHI-bomb, which got Rex all agitated — as it would any doctor, no matter what his stance on it. I would have started with malpractice insurance premiums and not gotten to wholesale reform of the medical profession until the back nine, but that’s just me.

Dr. Troy appears to be the master of psychological warfare, actually. All he had to do was say “tree line” and he gave Rex (in panel two) a case of the shakes as bad as a poker junkie desperate for his next fix.