Most soap strips run recaps on Sunday, so Sunday-only readers can keep up without weekday readers missing any developments. Other story strips show little vignettes outside their current narratives, like Foob’s pet antics, band practice, and walks in the woods. Sweet stuff, sometimes, and a nice break.

The Phantom takes a different approach: 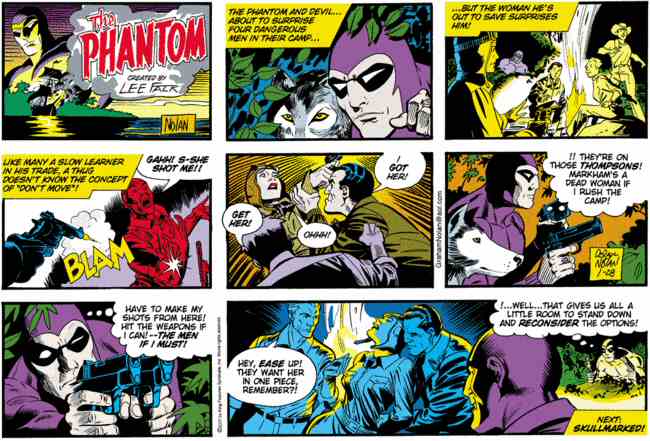 The Phantom runs separate, unrelated stories on Sunday and throughout the week. In the current Sunday series, the Phantom is investigating strange lights in a kind of jungle Forbidden Zone. The lights are from four “dangerous men” in what look like a couple of Duesenbergs, chasing spunky aviatrix Beryl Markham. The twist is, Beryl Markham flew in the 1930’s and died an old woman 20 years ago. We don’t know whether the guys in the cars are equally time-warped, but since their search patterns followed exactly the same schedule and path every night, we’ve got our suspicions. And, well, because they’re driving Duesenbergs.

The Phantom has strong female characters – Beryl here, that village grandma in the daily strip, President Luaga’s fightin’ secretary, and the Phantom’s own daughter Heloise, who’s been bruited as the next Phantom. And the art, by Rex Morgan, M.D.‘s Graham Nolan, suits the material well.

And if you like strong women and good art in adventure strips:

Alert reader Mr. O’Malley caught the announcement that this classic is being republished, apparently in order from the beginning, on the 60th anniversary of its original appearance. This is a real coup for the Humorous Maximus site, whose other offerings you may find, er, less distinguished. Steve Canyon author Milton Caniff was already a big deal when this strip appeared in 1947, from his work on Terry and the Pirates. This introductory Sunday installment already has some of the Caniff trademarks that would last through the 1980’s – exotic women, ineffectual supporting men, and tough-guy banter. Airplanes, the Cold War, and Poteet to follow. I highly recommend adding Steve Canyon to your daily reading.