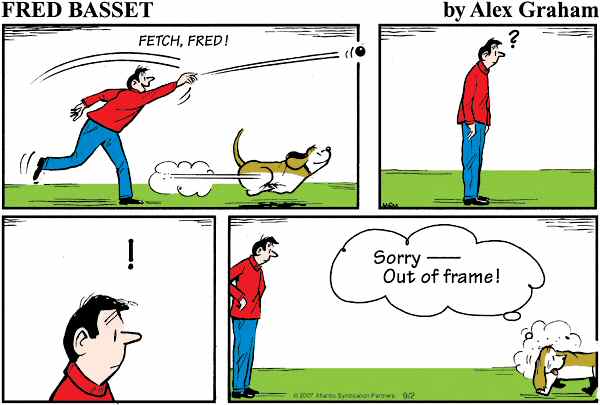 Comics don’t have to be funny.* I can’t remember ever laughing out loud at Fred Basset, but I nearly always smile. It’s something about Fred’s expressions, the comfortable way he gets along with his human family and canine friends, and his array of British virtues — mostly pluck. I’m a sucker for pluck.

Published since 1963, this strip has been in reruns since 1991, but you’d never know. It’s sweet, and sweetness lasts. Happy Sunday!

* Comics must, however, entertain. So, Mr. Tom Batuik, don’t think you and your dog’s breakfast are getting off the hook on Fred Basset’s coattails. No siree. And yeah, it’s a mixed metaphor. Wanna make something of it?

Speaking of warm feelings, the mere thought of these fine CC sponsors should quicken every heart: