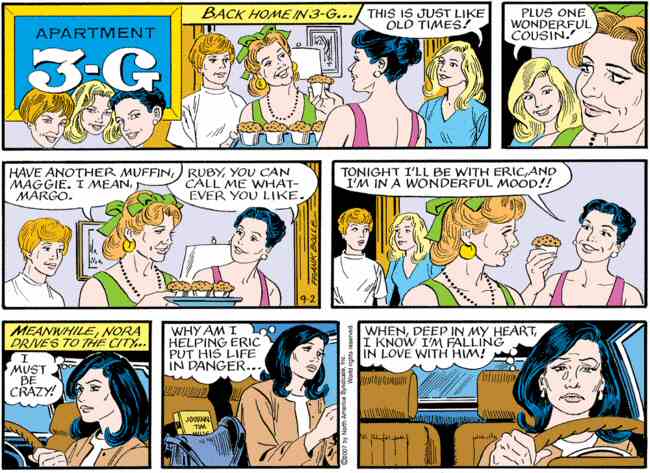 Oh, crap. Nora, here, who appears to be suffering from the same three-panel age acceleration as Tommie, looks like she’s becoming the focus of a Margo-related storyline. This means that for me to understand what’s going on with Margo, I need to pay attention to this person who looks just like her, but is deeply, profoundly, vastly more boring. Can anybody help? Somebody’s sister, and there’s a sick kid, and a drug addict with a gas leak? China, and some people there? Oh, crap.

Nice skeptical eye-rolling by Tommie ‘n’ Luann in #4, but this Nora thing, hmf. 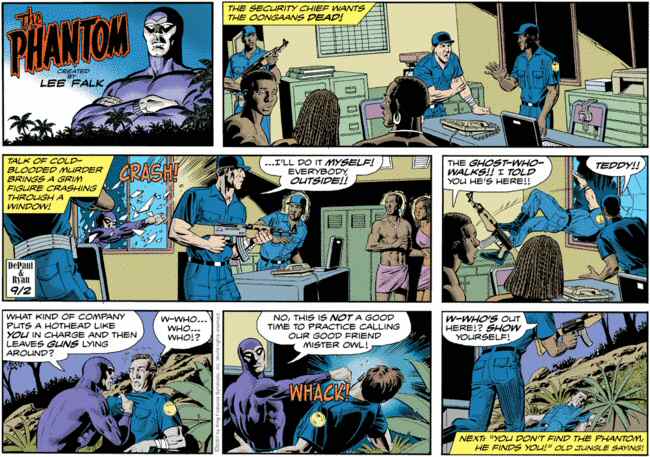 I’ll confess to letting ol’ Sunday Stripey slide a little after the Beryl Markham fantasy plot — hey, The Phantom has two separate plots to follow, okay? — but here it is in a nutshell: “Mumble mumble artifacts mumble not really grave-robbers mumble mumble that lady is pretty hot mumble heh heh guy’s making owl noises.” Phantom totally called him on it! NEXT!!!

Well, at last here’s something I can understand. Having accepted Lisa’s imminent death just last night, Les is now working hard to bring it about. And he brought Darrin and little Summer along to help! Ah, the family that plays together. . . wait, that’s just not gonna work, is it?