Puzzles, kids’ features, horoscopes and bridge columns (I’m lookin’ at you, Omar Sharif!) too often fly under the radar of the comics snarking community, and spread their poison to impressionable readers with impunity. But when a feature oversteps the boundaries of tolerance and simple decency — well, the time has come for responsible citizens to act.

I speak, of course, of The Jumble. 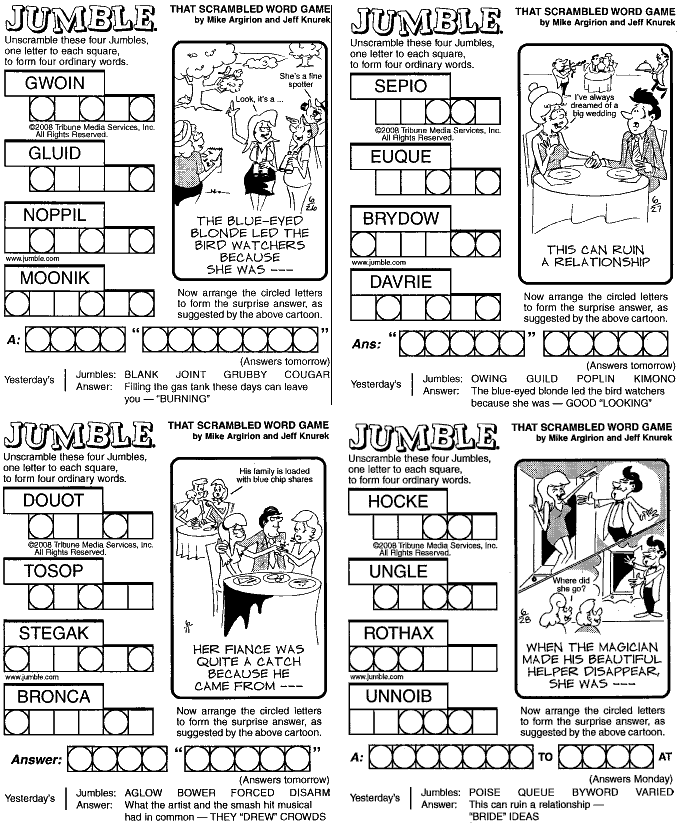 Why The Jumble? And why now? The case is clear:

Unspeakable filth — I don’t care who Gwoin is, or how gluid she may be. The brazen tart should keep her noppil to herself, and stop moonik those poor birds. Oh, and Douot? Your fluent Bulgarian doesn’t confuse us: “Tosop stegak bronca” means “Flip a coin and ride her like a wild horse” in any language!

Mixed messages — “Good stock” may play on Wall Street, but here on Main Street we get mad when somebody wants “To sock God.” So “Go to docks” — and we’ll be waiting for ya, buddy! And don’t think we can’t see that “Blank joint, grubby cougar” is a direct insult to the comfortable lodgings of our beloved Mary Worth.

Should the race always be to the swift, or The Jumble to the quick-witted? The time has come to raise our voices as one, and cry “No”!

PS. The Lumpies are traveling today — Sunday comics this evening!