We readers get to see TJ “Jheri” Rictus lookin’ forlorn every six months or so. It helps us tamp back the rage. But merciful heavens, one panel is not enough. Not nearly enough.

Dick’s been congratulating his own clever self on his 1337 crimefightin’ skillz for a couple weeks now, only to be undone by the night janitor. Is that why he’s moping in a mere “squad room” today, instead of his jaunty “squad pod”?

Okay, um, Seth neglected Mark while scolding Edda for breaking up with Amos, so Mark, hurt, hinted darkly at infidelity, creating a rift Janice now tries to exploit. Mark values revenge against Seth, whom he loves, but protects the integrity, which she lacks, of Janice, whom he spurns. These people are unclear on concepts like “love”, “revenge”, and — most of all — “gay.” On the other hand, they have “middle school” nailed.

Ah. The perfect trio to discover Alan in narcotic déshabillé back at the gallery — Margo for rage, Jack for muscle, and Gabriella for histrionics. Madre de Dios, we’re in for a good time next week! But first — cake! 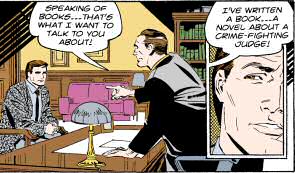 The second in our series: Who does Judge Parker think he is — Michael Patterson?