COTW in a moment, but first another exciting photo of a reader in Comics Curmudgeon gear! Today we have faithful reader Gold-Digging Nanny, she of I Found All Six fame, seen here on a very scenic boat ride. 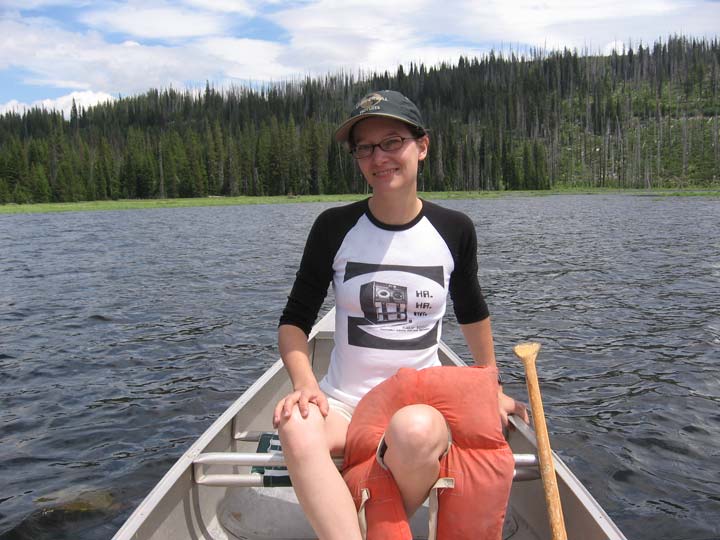 We went camping on the Upper Payette Lake over the Fourth of July weekend. We did some hiking and canoeing. I saw a few deer, an osprey, snakes, toads, and Slylock, who wandered into our campground briefly one morning and, we believe, returned the next morning to rummage through our garbage, presumably for clues … As you can see, I took the AJGLU 3000 with me. I brought a computer battery pack for it, but I’m afraid I only got error messages about an “incompatible power supply” and something to do with gerbil wheels.

And now, what you’ve all been waiting for … the comment of the week!

“I think I’ll make scampi! See, motherfuckers? I’m this boring, and yet you still read me every day!” –Edward

As you can see, this was a particularly COTW-candidate-rich week:

“I understand that the Vulture’s got some type of anti-gravity gadget and that he wears feathers and a beak and all, but what exactly makes him a super-villain and so difficult for the police to handle? Is it that he inadvertently induces laughing fits? Do the cops start feeling like they’re battling a character from Sesame Street or some Mardi Gras dancer? Are they concerned he might regurgitate armadillo parts all over them?” –PeteMoss

“So one well-documented dinner, two missed ones, and we are at ‘take care of yourself (because I won’t)’? Wow. Not only does Ron ‘not like seafood’ — he doesn’t even want to ‘try the veal.'” –Mel

“I think TJ is a stripper. I would certainly explain the wild outfits and cheery outlook.” –Smash

“I’m beginning to think that Mary Worth is actually Marxist agitprop meant to reveal the disconnected emotional emptiness that necessarily comes from slavish devotion to bourgeois morality. Meanwhile, today’s Gil Thorp (having shed its Brechtian distancing devices in favor a ‘tranche de vie’ naturalism) captures all the energy and excitement of watching baseball on TV. No, I’m not being ironic.” –denny

“Mary Worth: ‘Oh no! I’m being forced to make a decision!’ [CITY COUNCIL EX MACHINA] Mary Worth: ‘Never mind!'” –monsieurjohn

“So is this it for the Mary Worth storyline? After weeks of absurdly improbable newspaper articles, emergency town council meetings, apologetic answering machine messages, mournful thought-ballooning in empty apartments, and, finally, elaborate plans not to go to a seafood restaurant, all we’re left with is ‘Take care of yourself?’ Talk about phoning it in. At least Ron’s mother bit it before she had to sit through a month of Mary Worth’s life.” –Blynneda

“You know, I think Ted Forth just might be the virile love machine he says he is. He has the makings. He’s curious, willing to play with toys, not at all self conscious, open to new ideas and most likely very grateful. I could see him as a power bottom. It’s just the weeping afterwards that would turn most people off.” –Gabacho

“Maybe it’s just me, but I enjoyed reading the last panel of FOOB on its own, out of context. If there is a community creating hot gay FOOB fanfic out there somewhere, this panel will be their Abbey Road cover.” –glassonion

“I’ve read the first decade of the Spider-Man comic book. It was hilarious and action-packed, with Peter struggling with all these normal-guy problems AND supervillains at the same time. I particularly remember one where he had to fight Doc Ock, but his suit didn’t fit and his mask kept threatening to fall off … Anyway, newspaper Spider-Man is obviously trying to recreate those days, but they’ve only heard about them second-hand and don’t have any idea how to pull it off. It’s like if somebody heard the Marx Brothers were funny, so they dug up Karl Marx’s moldering corpse and filmed it yelling at the TV.” –Froborr

“What impresses me most about Mary Worth is its chilling ability to make me never want sex again. On certain occasions, it has even made me want to go back and undo all the sex I ever had before.” –Poteet

“I think Anthony’s decision to address John as ‘Dr. P’ is an attempt to Fonzie up his image. Sure, we all know that on his best day he could barely aspire to Potsie, but a man can dream, and so can Anthony. Look for him to start calling April ‘Shortcake’ and responding to all inquiries with his new catchphrase ‘whatever-you-say-a-mundo.’ Fonzie’s trademark double-thumbs-up ‘AYYYYYY!’ will be replaced by ‘eh’ and a barely perceptible shrug.” –Violet

“Unless you want Elly to rip your lungs out, John, and Anthony, if you ever wanna see Liz naked ever, you should both go in and at least offer to help with the wedding. Now, I know, I know, you’ll both screw it up and the women will say, ‘Oh, here, let me do it,’ just like when you make love, but at least this way, they won’t go into an insane rage.” –Jamus The Bartender

“I asked her how she found this place, and she said, ‘I did a Google search for Mary Worth, Old, and Ugly.’” –Cedar, on discovering that her mother was a Comics Curmudgeon reader

“Roger’s a born minion, following the shrieked commands of a deformed lunatic straight into the jaws of death. If this Kelly Welly gig doesn’t work out, he could hire on with Ernst Stavro Blofeld. Or Skeletor.” –Uncle Lumpy

“If used correctly, that oversized portrait of ‘Crankshaft-as-Stalinist-dictator’ could be a most potent form of birth control. Look, if you dare, at that grim visage for a minute. Can’t you feel your sperm count dropping, your ovaries shriveling up, your very will to live — let alone procreate — evaporating utterly? Such is the power of the ’shaft.” –Joe Blevins

“While I did have to check Wikipedia to determine what teal and lavender looked like, I can now confirm that the wedding will resemble the corpse of Easter.” –Foobar

And hey, tip-jar-money-putter-inners, have I told you lately that I love you? Because I do, I do! And I also must give love to my advertisers: