So, your COTW is coming in a moment, but there is a truly EPIC amount of material from faithful readers and others to wade through before we get to it. We must begin with the Web site that has the entire Mary Worth-reading community buzzing: Enormoushop.com. It’s where Toby shops for second-rate birthday gifts for her third-rate husband, and now you too can enjoy the savings at the Internet’s most enormous shop! I have no idea whatsoever who created this brilliant thing — please stand up and take a bow, sir or madam!

Next! You might recall the Protectors of the Earth video I posted a while back, in which Mary Worth, Mark Trail, Rex Morgan, and Garfield join forces to fight crime! Have you been patiently waiting for a part two? Well, your wait is now over!

These videos are the product of a newly-moved-to-LA comedy collective called Your Girlfriend.

And! Speaking of funny YouTube videos, I have been remiss in not drawing your attention to faithful reader Dingo’s fantastic “Mary Worth: Dancing Queen.” Watch it with someone you love!

In addition! Longtime readers may be wondering whatever happened to Lucky the Beaver, the wayward semi-aquatic rodent who got caught in a trap, was nursed back to health by Mark Trail’s ward Rusty, released back into the wild, found true love with a lady beaver, then was menaced by some mustachioed ne’er-do-well before earning his respect. Last we saw, he had knocked up his beavermomma, and it was open to question how he was going to support his growing family. Well, faithful reader gnome de blog just found the answer, and it ain’t pretty.

Also! What would an excessively long COTW post be without some shameless merchandise promotion? Here we have faithful reader AMSTERDANG, sporting a THE URGE shirt. (His URGE involves eating s’mores, apparently.) 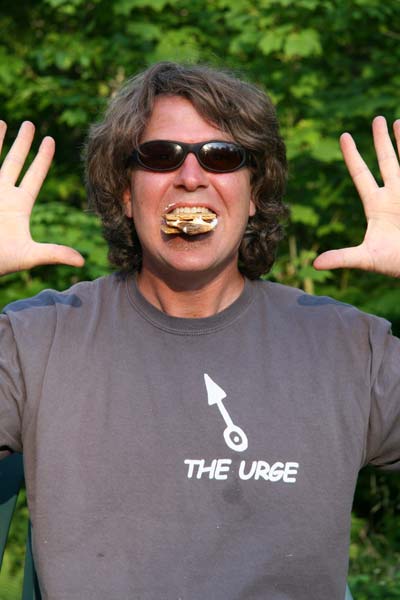 These shirts came out just before Al Scaduto passed away, so I haven’t really been promoting them much, but perhaps they provide a good way to remember the good times. The visible stains are, I hope, the fault of AMSTERDANG and not of CafePress. (If you’re a new reader and have no idea what this is about, I urge you to peruse the They’ll Do It Every Time archive post-haste!)

And finally! Faithful reader commodorejohn has set Mary Worth’s favorite aphorisms to music! Enjoy the funk genius of Mary Worth Told Me To.

And now, after all that jibber-jabber, it’s the comment of the week!

“You want excitement? Try counting how many different necklines Toby’s top has had since Monday. I count four.” –flodnak

Followed in short order by the runners-up!

“My God, they even use puns in their speech-locked minds.” –WarOfTheBees

“You know, a detective is as great as the foes he defeats. Sherlock had Moriarty, and apparently Slylock has the most petty criminals with the lowest IQ. Way to keep your standards low, Slylock.” –Foolster41

“I guess you could call this a glow by glow description! Oh, I’m having a stroke.” –Fat Charlie

“Also, Cathy is offering a week(s?)-long object lesson in why we shouldn’t necessarily be too annoyed at Herb and Jamaal’s notorious nonspecificity. Or, if I can put that another way, Cathy: Shut the fuck up about the Prius already.” –One-eyed Wolfdog

“Maybe it’s just me, but if I had to work under a man named ‘Fran’ pawing his crotch and telling me to ‘sit, watch, learn — and stay ready’, deportation wouldn’t look all that bad.” –Jordan

“The coach has a severed human forearm on his desk as some kind of macabre trophy, but Elmer is more concerned hotel accommodations? Man, I do not get this strip at all.” –Sobek

“‘Paperwork’ = Forging the signature on the consent form to medically castrate Jeff.” –Tweeks_Coffee

“Toby seems to be browsing in the “Documentaries About Other Countries” section (which includes such blockbusters as England, Japan, China, Italia…) So that movie on the far right in panel 2 is probably supposed to say Greece. But I prefer to assume that someone has mistakenly shelved the 1950s-nostalgia musical Grease in this section. Clearly that is what Toby should buy her husband. Ian would have a blast pointing out its inadequacies, while secretly thrilling to songs like ‘Summer Lovin.'” –Mollie

“‘Now let’s see if they sell my husband’s desired DVD.’ Damn, Toby, you need to start talking out loud. Thinking your words doesn’t seem to be working for you.” —WeaselBoy

“Why is Francis holding a wine and cheese party for his crew of dirtbags and derelicts anyway? Wouldn’t they be satisfied with a can Spray Cheez and the liquid squeezed from a microwaved Nerf football?” –Tracer Bullet

“This is, of course, buildup to the epic scene where Grandma has a heart attack and her grandkids, despite her repeated cries for aspirin and an ambulance, stand around hugging her.” –Mariko

“I’m waiting for Eric to realize he’s spent the last few months at the Morocco Pavilion at Epcot in Orlando instead of Lhasa, Tibet. ‘Gone? Gone where?!’ ‘Who can say? Maybe he’s taking his break in the employee lounge.'” –Duckman30

“Is ‘mother of the bride’ the same as ‘shoplifted from a rummage sale’?” –dale

Special thanks to those who put money in my tip jar — you true heroes know who you are! And we gotta give some love to the advertisers: