And it’s another fine evening for a comment of the week … but first, we have an exciting meetup report from our neighbors to the north, in Toronto! From left to right, that’s faithful readers Mooncattie, Skullturf Q. Beavispants, Niall, and Angry Kem. 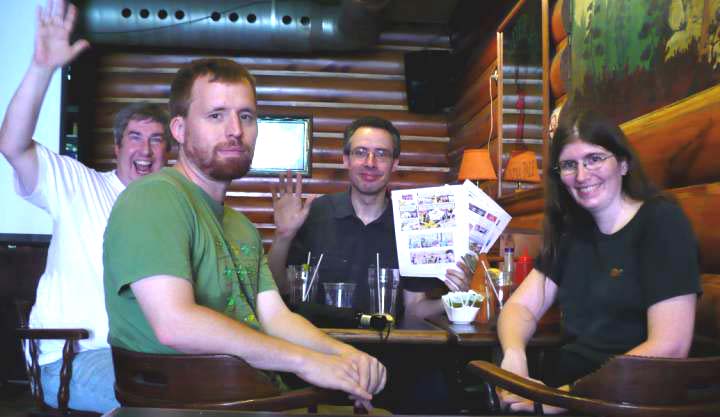 Niall has the report:

On a day where summer decided to come back just for us, including Lake Effect Humidity, I managed to get a few of the Toronto mudges (but not, eponymically, Toronto himself) to gather for a few (soft) drinks as I made my way back to the airport to Ottawa. I had some food for myself, and in honour of True Fable, decided on the Goat Cheese Burger, just to start the meet on the right Mudgeon tone. Skullturf Q. Beavispants was the first to arrive, and Mooncattie a few minutes later. It was easy to spot them as I had seen their photos from previous meetups. A little later, Angry Kem poked her head in, and something in her air (and hair) made me sure it was her so I waved her over.

I had originally planned to spend one hour then make my way to shopping and the airport downtown, but we spent a very happy two full hours discussing various topics, aided by Mooncattie’s printouts of a few Sunday strips as visual aids. The Usual Suspects were discussed, from the vacuousness of the soaps to the non-funniness of too many humour strips, to the interesting rise in adult humour capability of Slylock Fox (and Mr. Weber Jr’s ineffably good graces). Skullturf was not clear why True Fable was calling Hi and Lois “Scenes from Suburban Hell”, so I shared my own thoughts on how depressing every single strip ends up being, even if something nice happens – including Thirsty’s falling off the wagon the day before. He finally got it. Foob was discussed briefly, and we felt that as Canadians we probably would always apologise for it to Americans; I pointed out that as a native Québecker, if I could be proud despite having foisted Céline Dion on the world, we could still be proud despite Foob.

We tried to have meaningful, deep topics such as “If you could only read 3 strips, which would they be, and why?” and “What made you start reading and posting on the Comics Curmudgeon?”, but I fear that my rapid patter, manic gestures, and bad habit of going on deep tangents derailed most of the these intelligent discussions; so I’d like to apologise to the group. We did manage to educate Angry Kem on a few Mudgeon in-jokes dating from a while ago; then Kem and I managed to completely confuse the other two by making only allusions to plot points of her webcomic without saying anything concrete. (Though I gather now they’re really curious what the heck we were talking about and will go see. :)) I tried to make up for some of my ramblings by sharing the rest of the chocolates and fruit pastes I had brought to share with my other friends that weekend; I think any offense is now fully pardoned. Mooncattie was kind enough to drive me to the airport, while we shared more tales of going to meetups that aren’t in our city, and how much fun that can be. I certainly knew very well! As I pass in Toronto regularly, we might try that again…

Remember, Comics Curmudgeon readers are everywhere! And they are fun people to hang out with, so you should plan your own meetup today!

A couple more notes before we get to the top comments; as many of you pointed out, David Willis’ inimitable Shortpacked! comic riffed on Mary Worth today. David is of course a faithful Comics Curmudgeon reader; if you hadn’t been tipped off by his FBOFW and Funky Winkerbean parodies, there’s the fact that he designed the Finger-Quotin’ Margo shirt.

And finally, making good on earlier pledge to acknowledge your comic when it mentions me by name, I give you yesterday’s Frog Applause. I prefer Fritos to Funyuns myself.

Oh, and did somebody say COMMENT OF THE WEEK?

“Perhaps Irving is able to shut out reality to the point that, when he and Cathy do the deed (in the dark, missionary-only, with the phone unplugged and in the next room in case Mom calls), he thinks he’s doing it with someone with a little self-esteem. And breasts. And a nose.” –Paul1963

Also, did somebody, maybe the same person, maybe not, say runners up?

“I suspect that Cabin Boy Rex will in fact get a chance to play doctor on the high seas, when late at night Lenore knocks on his door in a cold sweat, reporting her symptoms: ‘I’ve got a fever, and the only cure is — more patootie!'” –Seismic-2

“Does Dennis’s dad actually change into PJs but keep that frickin’ watch on? Or did he don it specifically so he could point at it and glare? There’s a lot of passive aggression in that household.” –Donald The Anarchist

“Yes, Toby, at home. Where we live. In Canada. Remember when we moved our apartment to Canada? It happened, Toby. It really happened. Mwahahaha! …Did I laugh out loud? Sorry. Someone here told a joke. That’s it. Yes, dear, yes. Just a joke. Um … ‘eh’.” –Naked Bunny with a Whip

“You don’t suppose that the beard itself is actually an intelligent professor and the fat, jolly guy that the beard is attached to is simply a host? The speech balloon seems to point directly at the beard. The host body seems lifeless and detached from reality. It would make sense that Toby is attracted to it.” –Anonymous

“If an old, bearded, man named Crazy comes to my house with pizza sauce and cheese drooling down the front of his tattered blue windbreaker, forgive me for not answering the door.” –Beatrice

“I’m just now starting to realize that Mark Trail is essentially a superhero strip built around a guy whose super powers include punching people, having a neat haircut, and owning collared shirts. ‘Wildlife dying? Area drained of water? Caucasian children upset? This looks like a job for … Marktrailman!'” –Joe Blevins

“It is like the Herb and Jamaal of infidelity. ‘Did you see that item of inappropriate womanwear?'” –Emily

“God how I wish Alan was a secret cross-dresser. But of course this is Apartment 3-G, where even a desperate drug addiction is quaint and wholesome, so he’d probably just be wearing paisley maxiskirts and earth-toned caftans and or something. Maybe a blouse that skimmed the collarbone, if he was feeling really risque.” –Sensitive Poet

“I love the way Toby goes from self-flagellating despair in panel one to blissed-out zombiefication in panel two. In fairness, though, Mary’s little speech is both riveting and inspirational.” –Violet

“Is the Mary Worth plot really about identity theft? Because I’m beginning to think it is really about VD.” –Aging Hipster

“Mary may have her faults, but who else could hold onto a full, steaming-hot mug of coffee and simultaneously jab her finger accusingly without spilling a drop?” –BigTed

“I know it’s a vain hope, but I really want to see this end up with Funky tied up in the trunk of a car.” –migellito

I’m pretty sure that nobody said “tip jar,” but hey, big thanks for those who put some cash in it! And we must say “thank you” to our advertisers: