Comments of the week in a moment, but first, I must remind you of the existence (and the HOTTTNESSS) of the Hot Blogger Calendar! If you want a glimpse of just what goes on between those covers, you might want to check out the behind-the-scenes Flickr sets from the Jane and Sarah, the ladies who put this whole thing together. And from the set, here’s one that didn’t make the cut into the calendar, but shows the sort of hotness you can expect! 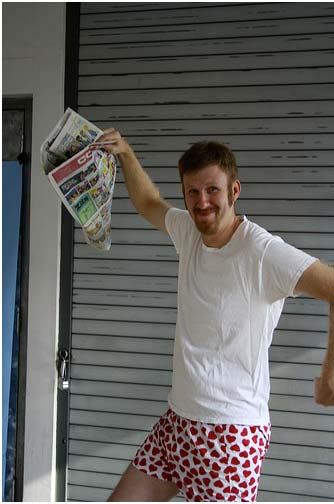 PRETTY SAUCY, RIGHT? That’s why you need to buy the calendar today!

Ahem! In non-half-naked-Josh-news, faithful reader (and former Seinfeld/Simpsons writer, and current cartoonist) Tom Gammill has an instructional video for anyone thinking of being a cartoonist.

Also! I was obviously not the only one captivated by the latest product being sold in greater Milford, Nut Boy (“It’s Nutty!”) Any enterprising designy types out there interested in putting together a kicky logo based on this?

I’m pretty sure those things floating around the words are supposed to be nuts. Nutty nuts. If I pick your design you win, er, eternal glory! And a free t-shirt, with your design on it!

OK, with that all out of the way, let’s talk … COMMENT OF THE WEEK!

“‘Some people just don’t want him around here’ is one of the least threatening sounding lines I’ve ever heard. ‘Oh, ok, so … you want me to just drop him off at the next town, then?'” –Smokehouse

And the runners up! So many, but it was a tough week to choose!

“Margo pops her collar like Tommie pops anti-depressants — like a teenage douchebag with nothing but his daddy’s credit card and time.” –Tats

“I have to correct Uncle Lumpy: watching Zombie FOOB for any of the faint pleasures of FOOB is like trying to huff dried paint.” –Crankenstank

“I wonder where the Gil Thorp artists got their understanding of shading. Have they ever actually looked at a shadow? Maybe the team that designs the strip is composed entirely of infants, who believe people’s faces disappear when you’re not looking directly at them.” –Isaac

“Mary has destroyed Lynn’s skating career in a single day. For an experienced meddler, it’s as easy as taking hope away from a baby.” –Mr. O’Malley

“I love that Dr. Blog appears to be putting on his stethoscope in preparation for Leroy’s cavity search. I’m now imagining him shoving the listening bit up Leroy’s butt, enthralled by the sounds of his large intestine. Loretta will be offered a chance to listen, but will respond with just a forgettable snipe. We should be thankful for this, because there are plenty of other figures in the comics who would be only too thrilled to listen to the sounds of a loved one’s colon up close and personal. Momma listening to Francis? Mark Trail listening to Andy? Les listening to Summer? Eeeeeew. I just squicked myself out with that last one. You’re welcome, everyone.” –Zaq

“Hounded by ceaseless nattering from all quarters, Lynn found no time to eat anything more than a handful of Tic Tacs for three consecutive days, with sad but predictable results. What went on in her mind, just before the fall, was essentially some flashing red lights and a weirdly modulated voice playing a ‘Warning — low power reserves’ message on loop until the blackness rose up and the ponytail toggled down into its ‘Status: Offline’ position.” –One-eyed Wolfdog

“I must say, the guy on the right side of the panel looks like what Brad would have become if he was raised by a family that actually cared about him.” –Erik

“If I’m ever kidnapped by desperate criminals and held captive on a boat in a swamp, that’s the rescue squad I want looking for me: an old guy named Pop and a dog with a raccoon on its back.” –BuckysWife

“Allow me to save everyone several months of beating around the bush: Doctor thinks Lynn is preggers. Lynn says she’s a virgin. Daddy doesn’t believe Lynn. Lynn has a giant nest of deadly spiders growing in her stomach. The spiders burst out during the big skating finals. Mary berates Daddy at Lynn’s funeral.” –Chyron HR

“What are the odds, do you think, of Salty just cutting to the chase and outsourcing his villainy to India?” –commodorejohn

“Given that every panel of Gil Thorp makes more sense as a crude homage to Hieronymous Bosch than as a ‘comic strip’ about the ‘sports,’ I’d say panel three is admirably straightforward.” –teddytoad

“The end is near; Sneaky is learning new tools to assist in his ever growing campaign against humanity. Now it’s riding dogs, soon simple tools. After that nukes.” –muscles like this?

“‘But he can’t explain something even more troubling…’ ‘What’s that?’ ‘Why I throw out my hands like a bargain-basement Fantine caterwauling “I Dreamed a Dream” while all I’m doing is talking to you here outside the lock-loun-whatever it is.'” –Amateur

“Note that the sole way of telling them apart is that one of them is wearing a sweater vest. The twins even have their basic white dress shirt rakishly unbuttoned in the same manner. They must shop at Dorks Unlimited.” –Farley’s Revenge

“Margo had to walk away from the good detective just so she could dramatically give him the over-the-shoulder-and-popped-collar ‘Does it matter?’ glare. God, how I want her.” –Cranky

“Wait, how many M-F-M three-ways have there been in A3G? And how many of them have involved Lu Ann and at least one blood relative?” –Artist formerly known as Ben

Answering the question “What are encyclopedias?”: “They’re like Wikipedia, but with less Aqua Teen Hunger Force content.” –Aaron T.

“If you’re going to show that someone has shaky hands, it’s best not to draw them holding a thing that vibrates. Just a thought.” –Elizabeth

“Oh my god! My father’s favorite platitude is in Pluggers! I better call him before he hangs himself.” –AsleepOrDead

“Ziggy: still pantsless, but now with a hat.” –kelsey

“It’s a theme cruise and the theme is assholes.” –trey le parc

MW: “The doctor can’t explain why Lynn won’t talk to me! How good a doctor can he be if he hasn’t figured out what a miserable bastard I am?” –Hogan

“My dead tree version of Ziggy was so badly printed I thought it read ‘suckasitis,’ which could mean ‘inflammation of the suck.’ It seemed appropriate for the strip, if not the park.” –Pendragon

“This cartoon looks like a scene from the upcoming plugger remake of The Karate Kid in which both Miyagi and Daniel-san are morbidly obese, nobody actually does any karate, and the final contest is to see who can eat the most cans of birthday cake frosting in one sitting.” –Joe Blevins

“Clovia better watch Slim around that hot little elf, in case she has a thing for tubby gas-station attendants that reek of urine.” –December

“The young elf-ette has a Dr. Suess look to her. Probably appropriate, as she’s appearing in his little-known and quickly pulled from shelves Pee On Knee.” –Mooncattie

“The symptoms displayed in Rex Morgan are that a disease ‘seems to have transformed all of the ship’s male crewmembers into assholes, and reduced the women to crying, traumatized wrecks.’ In the rest of the comics page, that disease is known as ‘Mary Worth.'” –Alan’s Addiction

Luann: “Ah, chaste chest talk. While I moderately approve of any story line that doesn’t actually involve Luann, I’m really getting tired of the whole Brad and Toni … OH MY GOD! I HAVE AN OPINION ABOUT THE COMIC STRIP LUANN!!!” –Lettuce

“Lynn has been put up in the Skater’s Ward at the hospital, where she enjoys a private suite and pre-hung posters of skaters gliding over landmines. No doubt that Lynn is confused by Mary Worth’s appearance, as the hospital counselors wear heavy make-up and white coats stitched with dazzling sequins.” –Idols of Mud

“No wonder poor Dixie’s a sociopath. She doesn’t even know how to dress for a shootout. Her mother will be appalled when she sees her picture spread all over the tabloids in a bloodstained, midriff-baring hoodie.” –Fashion Police

“I think he’s thinking of Toni in the context of ‘can’t elope, due to the emerging awareness of my attraction to TJ.'” –The Dead Acorn

The real hotties, who should totally have their own calendar, are the folks put some cash in my tip jar! And our advertisers are attractive folks as well, no doubt: