So, throughout this whole Weblog Awards business, I’ve tried to take the high road, refusing to even acknowledge my competitors for the coveted Best Humor Blog award. I’m modeling my campaign on the greatest of American presidents, Warren G. Harding, who felt that traveling the country seeking votes was beneath his dignity, and instead just had voters shipped in to Ohio to watch him bloviate from his front porch (except I refuse to go out on my porch because it’s cold). However, as all campaigns will, this one has turned ugly, and now I’m going to have to dirty my hands a bit. It seems that one of my opponents, the so-called Bloggess, is spreading scurrilous rumors about me — namely, that I eat kittens and plan to celebrate my inevitable victory with a kitten feast. She’s even made a badge for those who won’t vote for her, and taken her dastardly lies to the Twitter, where I can’t fight back because I can’t even begin to understand the Twitter or how it works, but here’s a picture of those Twitter lies: 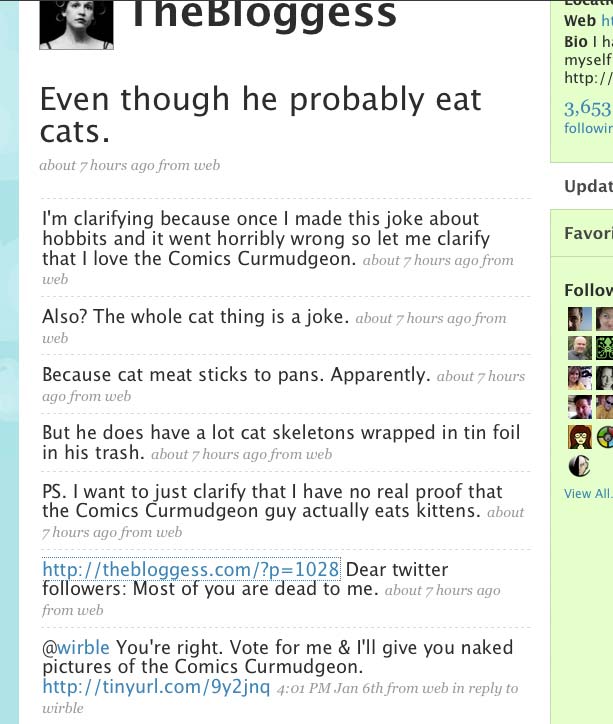 Anyway, I would like to state right now, for the record, that I would never, ever eat a kitten. I love all cats, as my own pampered kitty can attest. Instead, once my opposition has been crushed and the award that is rightfully mine has been handed to me, I will celebrate by eating babies.

Seriously, though, you should totally read her blog because it’s very hilarious! And please do not start a blog fight with her commentors! We can all be friends (as long as I win). And I’m not just saying that because she also writes for the Houston Chronicle and could maybe somehow cut me off from my custom comics page. Or because, according to the Twitter, she has naked pictures of me, somehow. And when you’re done enjoying her blog, come back and vote for me, which you can do every 24 hours. Because babies is delicious.

In other Weblog Awards news, Medium Large is, against all odds, within reach of third place in the Best Comic Strip category! Vote for Ces to get a bronze medal! It will help with his self-esteem!

IMPORTANT AD NEWS PLEASE READ THIS: In non-self-congratulatory news, I am about to restore the ads that I removed a couple of days ago. Please e-mail me if anything sketchy happens when you visit this site after this point (i.e. after 8:45 pm eastern time on 1/7) — pop-ups, weird redirects, etc. Thanks. UPDATE: Ads taken back down. Blech.