Your COTW coming in a moment, but first: were any of you at the Bust Craftacular craft show in New York City the weekend of the 5th and 6th? And did you notice a certain attractive young lady helping out one of her friends who was one of the vendors? And did you notice a certain dashing young man who was married to said attractive young lady, and who stopped by for a visit? Well, as this blurry but endearing cell-phone photo demonstrates, faithful readers Anna (aka Mary Kay Commando) and Jess certainly did! 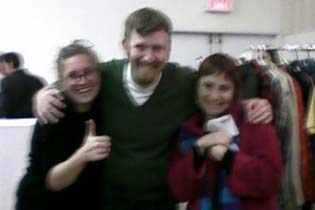 The lesson here, folks, is to take advantage of those rare occasions when I emerge blinking from my dank underground lair, and come up and say hi if you spot me! You will be immortalized on the Internet, forever! Jess and Anna were charming and it was great talking to them.

And with that out of the way, here is your COMMENT OF THE WEEK!

And the runners-up! Just as Wilbur and his bastard spawn dominated last week, so Mark and Rusty’s adventures were on your minds this week.

“Today’s Mark Trail has me grabbing a bag of popcorn and a copy of the tide tables.” –NoahSnark

“I was going to say that pelicans probably don’t sit up in trees. But first I Google-Image-Searched ‘pelican in a tree’, and look at that, they do. Then I realized that I had been tricked into learning about nature. Verrrrry tricky, Mr. Elrod. Well played, sir.” –Just some guy

“Speaking of Judge Parker, we note that Miss Sanchez did not remain seated for long. She probably needed to stand up in order to breathe.” –Fashion Police

“They say that when a loved one is in peril such as being trapped under a vehicle, a parent can summon the strength of 10 men. Mark can’t because he simply doesn’t love Rusty enough. And who could blame him?” –gagott68

“Minutes will seem epochs until we finally get to see Wilbur’s college hair.” –Gump Worsley

“Rusty, we passed an old life insurance agency a little way back … I’m going to run back there and help your loved ones.” –Stroker Ace

“Well, if people are going to believe that a ‘dog’ knocked the car onto Rusty, and that a boy would name that dog ‘Sassy,’ surely they’ll believe whatever Mark tells them about the aftermath of the ‘accident.'” –Steve S

“Perhaps it’s just because Rusty looks almost human (by the artistic standards of the strip) in panel 1, but this storyline seems rather hilariously, nightmarishly cruel, with more and more ludicrously over-the-top evils befalling a hapless deformed dwarf while a high functioning autistic man stands around and tries to help in logically consistent but idiotic and completely ineffectual ways.” –Master Softheart

“All of Mark’s actions seem so dim, but maybe he’s just trying to let the Law of Nature play itself out with no interference. The deer that jumped in front of the car lived, so Rusty must die. Nature is like that, harsh but beautiful, much like June Morgan.” –Mardou Fox

“After spending half the day looking for her vacuum, Aunt May stared into the middle distance, wondering when the Alzheimer’s would finally take her.” –kittyloop

“If the size of modern comic strips weren’t so small, Brook’s tatas wouldn’t have needed to have been pushed up into her throat to fit in the panel.” –doug rogers

“Yes, that’s right, a vacuum cleaner! And it’s going to be lights out for you, Sandman, just as soon as I find a … just as soon as I plug it into a … nearby … Oh goddamn it Spidey, come on. You can do this.” –Bryan Bryan

“So here I am trying to make a joke about the fact that both Summer and Pete seem to have the same haircut when I realize that hers reflects light and his soaks it up like a black hole. I like to believe that he’s covering self-induced early greys with permanent marker, foreshadowing the ritz and glamour of Chez Pete, where Summer Jr. will be messily conceived. God I love this comic.” –Black Drazon

“I can’t understand why the store in Mark Trail would be closed. Ample parking, great location … what’s the problem?” –survivor

“Wait, didn’t Rusty get pinned under the car because of a jack that was used on the sand? So now Mark is going to use ANOTHER jack to save him? I so very much hope this is going to be an endless loop of a car being raised and smashed down on Rusty while Mark smashes in more and more automotive store windows in the hopes that THIS jack will save his young protege.” –Patrick

“That box on the plugger’s TV is probably one of those new-fangled digital converter doohickeys the gummint is trying to force us all to buy if we don’t want to throw away our perfectly good black-and-white TVs darnit like when they told us stereo was better for music but all music today is already too loud and those kids I don’t know why they dress like such hooligans it’s gotten so you can’t go out anywhere they got these rappers now.” –Kibo

“So my favorite thing about today’s Ziggy is that it assumes we’re culturally illiterate. Do we really need a labeled chair to tell us that the fat man with a white beard and a funny costume is Santa? The whole over-labeling thing makes me think the comic is going to be turned into a political cartoon and Ziggy will have to wear a shirt that says ‘the broken and castrated American spirit’ at all times.” –GG

“Me talking to my grandkids in 2055: ‘Yup! December 12 was the day Mark Trail became an anarchist. It was Saturday and it was beautiful.'” –Edgy DC

“It looks like Cherry got Mark a second shirt for Christmas. Oh, and it matches all her pink polo shirts. Now they can be twinsies! Or at least they could, if they ever spent any time together.” –Rita Lake and the Special Goddesses

“I just assumed Mark was acting out a scene from the 1989 classic Do the Right Thing as part of an ongoing Spike Lee retrospective. Next week is Malcom X week, when we’ll hear some stunning oratories about how we didn’t land on Lost Forest; Lost Forest landed on us.” –Dan

“Cherry, I know you’re my animal, and I know you need to be loved! I promise I won’t return you to the shelter, at least for now!” –Calico

“‘And believe me, pets need a great deal of attention!’ says Mark Trail, as he throws his Saint Bernard’s ginormous turd into the fireplace.” –Disingenuous Penguin

“By the way, this is Mark’s second concussion in a month, so the NFL will make him sit out the next game.” –mr 12 oz can

“There’s not much that could come after ‘June is not amused…’ which wouldn’t make me nod quietly and think ‘No, she sure wouldn’t be amused by that, would she? No sir!’ I mean, I can’t think of anything, really.” –One-eyed Wolfdog