Not for the first time, I’m completely flummoxed by the moral and legal universe that Mark Trail inhabits. We’ve had plenty of wholly understandable righteous indignation about Future Governor Frank’s semi-caged hunting of semi-wild animals scheme, but no mention of any actual laws that it might break. What, then, does Mark hope to achieve with his telescopic-lens photos? Career-wrecking shame? But Frank seems to believe that this hunt will improve his popularity, not harm it. But maybe we’re meant to believe that honest ordinary voters would be repulsed by caged hunts, and only the twisted, effete elites would take joy in this vile pastime. Perhaps Mark wants to reveal Frank in the midst of clubby scenes like panel one, with its “gentlemen, let’s toast to evil!” vibe, and destroy the common-man cred that we haven’t seen him doing any kind of work to build up. Today, however, we become privy to immorality within immorality, with the already farcical hunt’s outcome being fixed in advance to curry favor with some influential lawmaker. Where does the rabbit hole of depravity end?

I’m pretty numb to bizarre Elrod-ball placement at this point, but I do find panel two particularly charming. Ol’ Joe isn’t too bright, apparently, as he needs to be reminded that he is in fact Frank’s ranch foreman. Frank carefully outlines the details of his scheme, but Joe can only look on numbly and mutter “Jack Elrod” in response. Perhaps simple Joe will be this story’s moral center, refusing to fulfill his odious duties and instead revealing the sins of his employer to the world. “Jack Elrod!” he’ll shout, in triumph. 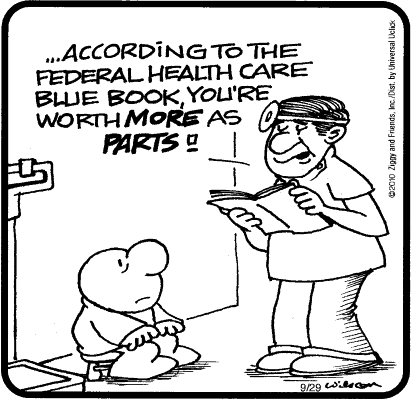 Ha ha, Ziggy, don’t worry! Nobody actually wants to buy your body parts. In fact, most people, upon discovering that your liver or one of your kidneys was inside them, would probably try to remove the offending organ with whatever sharp implement was at hand.