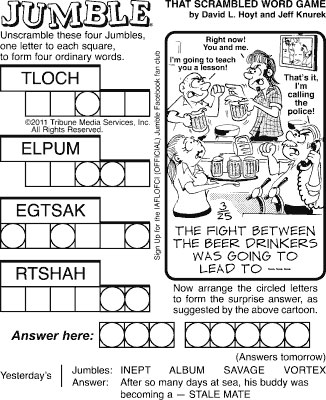 If there’s one thing I live for every day, it’s the thought that insane violence might break out in the Jumble, which is why today’s panel, with its false promise of insane violence, is even more disappointing than most. The two fellows here are clearly identified as “beer drinkers” in the caption, and in fact the mugs they’re brandishing as they antagonize one another are obviously full of some kind of brew, to the extent that it’s actually sloshing over the top. Would any “beer drinker” worth the name risk losing any of this precious nectar in the course of fisticuffs? The mere presence of the liquid precludes the use of the heavy glasses as weapons, or indeed any quick movements of any sort. The two ruffians will no doubt use the barkeep’s threat to call in John Law as an excuse to de-escalate their confrontation, and another Jumble ends without anyone being sent to the hospital.

“Hmm, this unkempt hobo is too gross even for my extremely undiscriminating tastes. Who do I know who’s extremely desperate? Oh, hey!”