Oh, Herb, you were doing so well with this analogy for a panel or so — yes, “endorse” could mean “lend credence to” when talking about a rumor! — but then I’m afraid you’ve just spun out of semantic range, since it’s not clear at all what it would mean to “cash” a rumor. Presumably if there were more panels we’d see him musing about how you should always be suspicious of rumors without built-in watermarking features, and that you can now log in to your bank and see scans of cancelled rumors rather than having them mailed back to you with your statements, etc. I was going to say that, since this misguided metaphor is playing out in thought balloon form, Herb at least won’t embarrass himself in front of his customer, but then I remembered that he ran away from the guy with his fingers in his ears shouting “NO, NO, NO! DON’T TELL ME!” 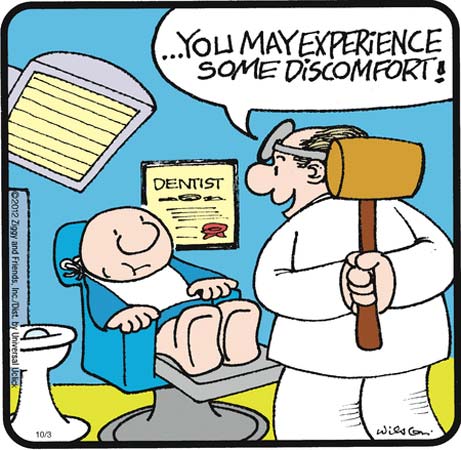 Ziggy’s dentist is about hit him in the face with an enormous hammer.