Hey y’all, just a reminder for those of you who will be in New York City or NYC-adjacent this weekend that I will be participating in a live show where I and other funny people, including Bob Powers (of the “Just Make A Choice!” Choose-Your-own-Adventure series and the hugely popular GirlsArePretty blog) and Andrea Shapiro (of Puttin’ On Your Big Girl Pants), will be reading aloud from movie novelizations! As previous reported, I will be reading from the novelization of Star Trek: Generations, focusing on the sections pertaining to everyone’s favorite renegade Klingon sister act, Lursa and B’Etor: 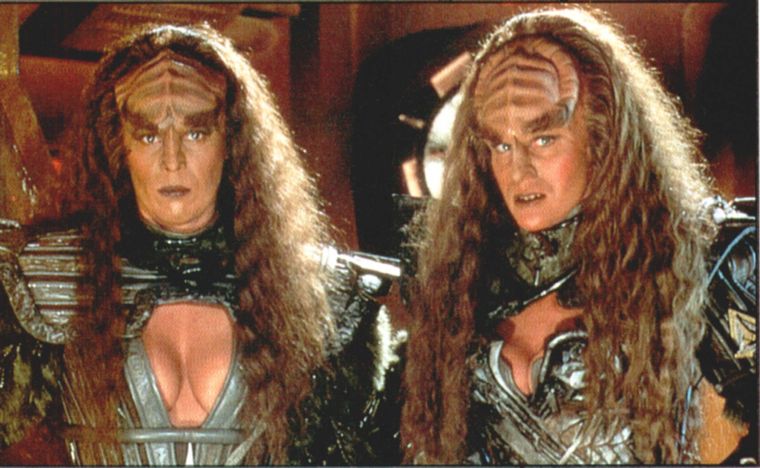 The show is at 6 p.m on Sunday 5/4, at Baby’s All Right at 146 Broadway in South Williamsburg, and you can buy tickets for $7 or check out the Facebook event. Please come, it will be fun/hilarious!

And now with that out of the way: your comment of the week!

“This is an act of surprising intimacy on Wilbur’s part — he has introduced Iris to the person who makes his sandwiches. What more personal detail could there possibly be, for him to reveal next? Will he introduce her to the barber who grooms his four hairs?” –seismic-2

“If Franz Kafka were being kept alive by artificial means, he would be 130 years old right now and probably very, very tired. Under those circumstances, Sunday’s Crock is exactly the kind of thing he might write.” –Joe Blevins

“Darn hip and knees and elbows and lungs and heart and brain and soul and universe.” –C. Sandy Cyst

“Hmm … I know Tommie is an unstable near-widow who displaced her feelings onto a wild deer that she was trying to raise in our apartment like a child. Yeah, three weeks is about the right amount of time to wait before we get concerned.” –Snark Twain

Funky Winkerbean: “Same artwork, better dialog: ‘Why, Jessica … I wasn’t expecting…’ ‘IS THE TOILET STILL IN THE BATHROOM!?'” –Dr. Mabuse

“We’re lucky that Heathcliff is a one panel comic, because it’s obvious what the lifting of his tail is leading to.” –nescio

“If you’re anything at all like me, you responded to today’s Mary Worth by jumping to your feet wondering just where and how and how soon you could get a long-sleeve polo with button cuffs. Well, my friends, you are in luck: Kent Wang sells them for just $85 apiece. And, as I’m sure you’ve already noticed, they come with ‘a spread collar for a subtle, rakish look.’ Whoo-hoo, Santa Royale is getting hot tonight!! Pro tip: Best to follow Wilbur’s example and get your shirt in white, so the mayo stains don’t show.” –Oregonian

“Youth slang tends to be incomprehensible to parents. One wonders, then, what POOP really means. Is it an acronym, perhaps ‘Poison Only One Parent?’ ‘Potent Opioids Open Potential?’ Not so kid-friendly now.” –Voshkod

“Do you have an important business meeting, job interview, meeting your love interest’s father for the first time? Why not try Iris’ power handshake? Simply align yourself off to the side and grip the other person’s thumb like you’re strangling it. You are now in control.” –Chareth Cutestory

“Sure, it’s all cheerful now, with Wilbur actually having a friend who isn’t an 80-year-old biddy and all. But wait until they fall back exhausted after sex, and Wilbur, staring at the ceiling, asks, ‘What do you suppose Jerry at the sandwich shop is doing right now?'” –Dr. Mabuse

“Yes, Jess’ mother’s camerawork style is influenced by European impressionism, as demonstrated by the use of dutch angles in her family home movies, whereas Jess herself has her own unique, dark, minimalist style, in that she rarely takes her camera out of the bag.” –pugfuggly

“In panel two, is Wilbur’s shameless glee driven by the fact that Tommy could be his ‘inside man’ at Jerry’s? Or is this his very best Hannibal Smith plan coming together with problem solved and Iris and he bound forever to Jerry’s? Or did he just let out a SBD fart? I guess we’ll find out in a couple weeks.” –Dtyler99

“I think Jerry would actually really like having Tommy the Tweaker working for him, since judging by his clothing, hairstyle, and mustache, he clearly was a drug dealer on Miami Vice prior to opening this restaurant.” –Brad

“Nigel Smythe-Clownhair of Rumpledtux-upon-Wessex has awfully high expectations for a dude who married someone with Dr. Seuss trees for legs.” –Daniel

Judge Parker: “They send non-recurring characters to drop untold wealth on the undeserving — but they cannot draw Abbey’s nipples because it would be considered obscene!” –cheech wizard