“It’s like an ‘Easter egg’ in that it’s been sitting around forgotten for 15 years and it stinks.” –Chyron HR

And your extremely delightful runners up!

“For a strip obsessed with death, Funky Winkerbean really does have a problem accepting that certain characters ARE ACTUALLY DEAD AND CAN’T TALK ANYMORE MOVE THE HELL ON” –C. Sandy Cyst

Mary Worth: “Ian, Toby’s instructions were clearly stated: she did not want you to attempt to contact her. Yet here you are attempting to contact her. I find it scary that an obvious illiterate has a doctorate in English Literature.” –Zerowolf

“Dear Wilson and Beatty: I fear you have misinterpreted my request to return the focus of our story to a pregnant June Morgan and her new rack…” –boojum

“Mr. Plugger is intimidated new things, so he spends all his free time re-reading the same familiar book over and over again. But this time, something is different. On his 17th repetition, on page 113, the book has changed. Something unfamiliar has happened. You have entered a dimension of fear. A dimension of dog. Welcome … to the Plugger Zone.” –Nekrotzar

“Toby does not have lots of friends. Hell, she probably doesn’t even have Mary now.” –Gabacho

“Hey look! It’s another deadly situation that could have been avoided weeks ago by just picking up a phone and calling the authorities. Welp, anyhow, I hope Mark enjoys his cool underwater harpoon fight as his hair falls out and his organs start to fail.” –pugfuggly

“Wait, a pharmaceutical price-gouging joke? Oh man, Pluggers is accidentally timely. I don’t know how to react to that. It looks like chicken lady doesn’t either. This is really uncomfortable for everyone involved.” –Dan

“A classic! We have to choose between medicine and food! Haw haw! Well, looks like it was a bad choice for a chicken to marry a carnivore.” –hogenmogen

Although ‘Toby’s only friend is Mary and everyone knows it’ is pretty good, it would be fun if it turned out that Ian had cameras in every apartment at Charterstone, Sliver-style. ‘Mary, put Toby on! I can see she’s there! Uh, I mean, I can see her in my MIND’S EYE, in yet another boner-deflating lavender ensemble … you know what, maybe this is for the best.'” –Windier E. Megatons

“How’s this for irony? A bird bought a trampoline!” –Not Frazz

“If he does bite, lady, let me be the first to tell you that leash and harness ain’t gonna work. What you’re going to need is a muzzle. And I can say from experience, don’t cheap out and get some flimsy mesh thing from Petco. What you want is leather. Thicker the better. Mom’ll back me up on this. Won’t you, Mom?” –Joe Blevins

“In Lu Ann’s Wager, you believe in God not to avoid eternal damnation, but rather keep your face from melting like Tommie’s in panel two.” –But What Do I Know?

“It’s not like my Mom used to make. Of course, she learned at the feet of the great Heisenberg. I can taste the phenylacetone and … is that cumin?” –Voskhod

“If they do rename Herb and Jamaal, I hope they name it The Gourd People. Because then it’ll be a science fiction strip, and instead of thinking, Why do these people act like this? we can think, Ah, the Gourd People are practicing being human so they can ‘fit in!’ Ha ha, it’s funny how far off they are.” –BeckoningChasm

“Do you suppose that kid from yesterday bit Dennis and that’s what the bandage is for? The human mouth is filthy and his mother should have taken him to the hospital for all the required shots, but after that last comment I’m not sure she’s feeling anything, either.” –WLP

Also, let’s give a shoutout to Adam Clarke on Twitter for coming up with the first ever visual COTW candidate: 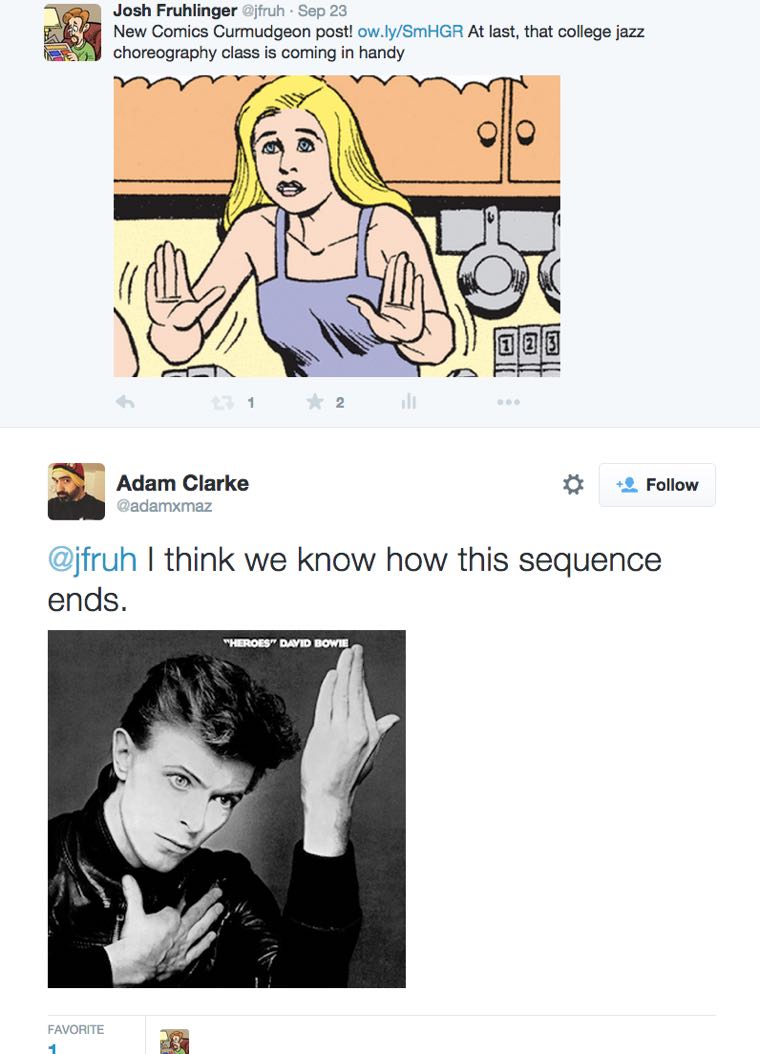