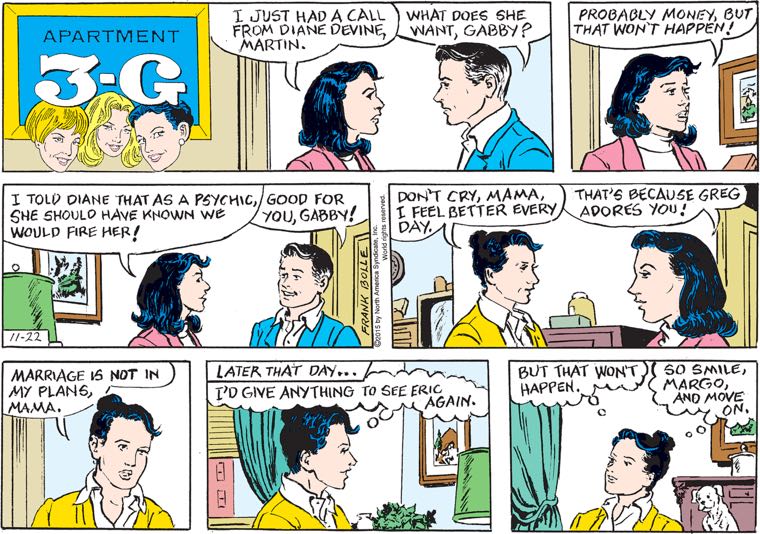 WAITAMINUTE, HOLD UP, IT’S AFTER THE PROMISED NOVEMBER 21ST DATE AND APARTMENT 3-G IS STILL HERE? I’m assuming that this is the typical Sunday summary, giving readers a condensed version of the same weird, confusing, passive-aggressive not-conclusion that we saw in the daily strip. But wouldn’t it be funny, and in keeping with the shambolic vibe of this strip over the past couple of years, if they just sort of forgot to end it, and it was going to lurch on forever, unsupervised and out of control?

Anyway, I might as well take this opportunity to give Apartment 3-G a little send-off. I don’t think it’s a secret that it’s always been one of my favorites. On the control panel for my blog, I can sort all the strips I cover by the number of posts they appear in, which makes my preferences pretty clear: 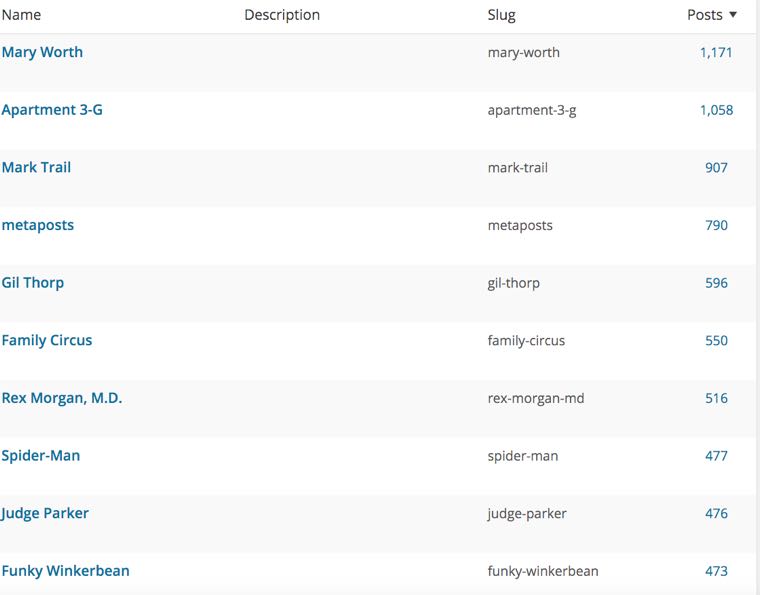 It’s going to take a long time to displace Apartment 3-G from its number two spot. The strip’s quality might have fallen a lot from its glory days, but for most of the last decade it’s been a fun, frothy strip with a great three-cornered dynamic among the leads that I’ve enjoyed poking fun at and also genuinely, actually enjoyed. (Also, sorry to use this encomium to build buzz for myself, but the strip inspired one of the major plotlines in my novel, so it’s sad that the girls won’t live until publication day.)

I’m not sure if we’re ever going to learn what went so weird about over the last couple of years, but it’s bummed me out, and it’s bummed me out that a strip with such potential to be genuinely and unironically rebooted (I’ve said it a million times, but: A CONTINUITY STRIP ABOUT THREE LATE 20s/EARLY 30s PROFESSIONAL WOMEN LIVING IN NEW YORK, WRITTEN AND/OR DRAWN BY ACTUAL YOUNG WOMEN LIVING IN A BIG CITY, WOULD DO WELL) is just being put to bed instead. If you’re a comics big-shot, please contact King Features and see if they’ll part with the intellectual property. Until then I will pour one out for Margo, and for Lu Ann and Tommie, despite the fact that they haven’t appeared in the strip for a while now. I’m gonna miss these gals a lot.