Guys. I know you’re probably sick of hearing this by now, but: I wrote a book. It’s real, and it’s spectacular, and it has great cover art from Don Sparrow (hardcover) and Matt Lubchansky (paperback, and also the endpapers on the hardcover). 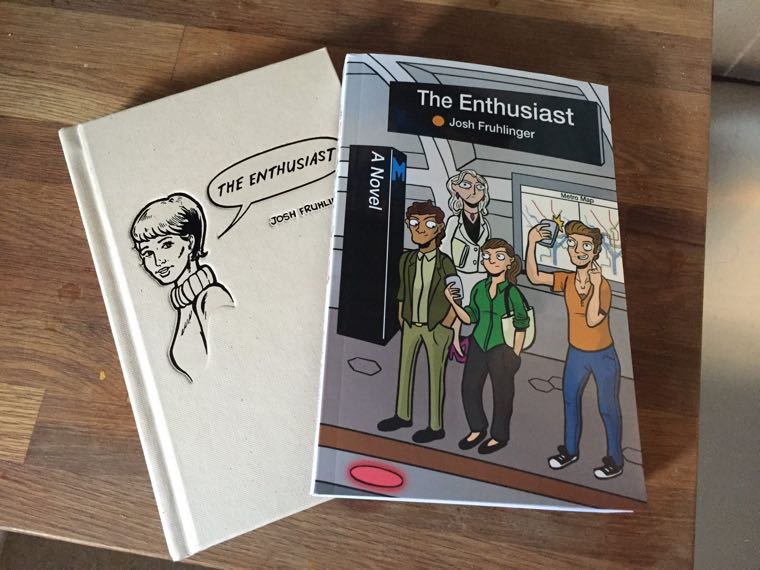 Not to give anything away, but there’s a lot about soap opera comic strips and the people online who love them ironically and maybe not-so-ironically in there. (Don Sparrow also did illustrations of the comic-within-the-novel, and was so moved by the experience he started his own!) I think it’s a funny book — I mean, I put jokes in there a-plenty — but as faithful reader Russell says, you’ll be “pleasantly surprised by the sincerity and low level of snarkiness.”

ANYWAY. I haven’t done a pledge drive this fall, but if you’re enough of a fan of this blog that you sometimes put cash in my tip jar, I think you’ll enjoy spending cash on this book instead, either as a real physical book or an ebook. And if you’re a fan of the blog but have also felt like it’s silly to put cash in an Internet tip jar because you only exchange money for goods and services, well, now’s your chance to do so, and do so now, if you want the book in time for Christmas. And if you have the urge to put some money in my tip jar anyway, well, I’m sure not gonna stop you!

OK, with that out of the way, it’s time for your comment of the week:

“Rocky’s the only one with the decency not to shine Fuzz on about showing up for his lame-ass party.” –Doctor Handsome

“Jordan is the chauffeur, right? He spent 20 years in the Marines, where he learned everything he knows, and so now he can drive a limo. And bring tea to the old man. And change his diapers. And beg for death, I assume.” –Calvin’s Cardboard Box

“I’m honestly surprised nobody has figured this one out yet. Look at where the submitter is from: Prescott, Wisconsin. What singular, ‘recent’ political event took place in Wisconsin? A recall election. Plugger jokes are backed up by five years, just like pluggers, is what I’m saying.” –pastordan

“Of course the Tooth Fairy cares whether you’ve been naughty or nice, Dennis. Ever seen someone with meth mouth? The Tooth Fairy is very vindictive.” –Bryan J. Simmons, on Facebook

“Dennis is old enough to lose teeth, but he still wears a onesie to bed? That tells me he’s still in nighttime diapers, with no light at the end of that particular tunnel for Alice. Should score at least a 5 on the Scale O’ Menace.” –sally

“Grumpy Santa is probably going to be the subtitle of the sixth or seventh Paul Blart: Mall Cop movie.” –Hans Peter Gertje, on Facebook

“In the Mommaverse the beta-patriarchy created ‘squatters rights’ romance to allow ‘nice guys’ to entrap women on the rebound.” –Philip Moon, on Twitter

“I told Cindy I’d like to live here in Westview! Why? Because if I’m ever going to get that Oscar, I need to learn tragedy. Where better? Deaf band instructors, everyone’s cancer ridden, this dump is the best restaurant around. It’s like a black hole for tragedy, drawing in every horror and fear and compressing them into a dark spot on the map where nothing joyous can occur. After a few years here, I’ll be ready to play Hamlet, or Oedipus, or a morally-complex villain! Assuming I survive the cancer. And this pizza.” –Voshkod

“Oh, sure, the announcer is annoying. But that doesn’t mean Cosmo is going to watch the PG-rated version, without the beheadings or the titties that the bird actresses will somehow have.” –Artist formerly known as Ben

“I don’t know about you, honey, but after all that ‘reality show’ unpleasantness, I am ready for some hot, hot Rebel Without a Cause role playing scenarios. Just the thing to unwind on a Saturday afternoon.” –Joe Blevins

“Unsurprisingly, the residents of the Funkyverse have only a very, very vague idea of what a smile looks like.” –C. Sandy Cyst

“Crankshaft is in excruciating pain. In related news, it’s the happiest Crankshaft holiday ever.” –TheDiva