It’s Christmas Eve, and you know what that means: I leave town and take a break from mocking the comics and let the ol’ web servers cool down as well. I’ll be back … I dunno, let’s say no sooner than January 1, and no later than January 4, depending on my mood. But if you’re hungry for more writing from me … well, I think you know where this is going: 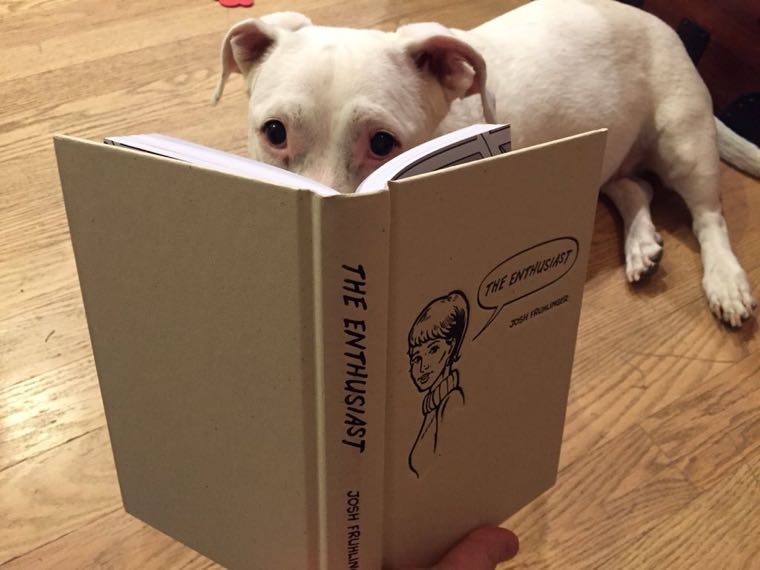 BE MORE LIKE THIS ADORABLE DOG AND READ MY NOVEL! You can order it in physical book form, sure, but it probably won’t get to you until next year at this point. For your immediate Josh Fruhlinger prose needs, you’ll want the ebook bundle. But why not order both, just to be safe? And remember, if you feel the keen need to try before you buy, you can read the first chapter on Medium or listen to me read the the third chapter on the Catapult podcast.

And, oh yes, let’s enjoy your comment of the slightly truncated week, which will reign supreme until I come back and then we accumulate another week or so of comments:

“In spite of all the crotchety indignant pouting by Alan, I still have to say that my favorite panel in this whole strip is the final one, where Sam stares off into the middle distance, contemplating what his world is like. ‘Let’s see, I spent most of 2015 nursing a squirrel back to health, setting up a skype call to a wedding and then selling an RV to my daughter’s soon-to-be lover. Oh god, I should have never left my practice…'” –pugfuggly

And these runners up are also hilarious:

“I wouldn’t think your average newspaper cartoonist would be making enough to shop at Whole Foods, but here we are.” –Mars

“In Curtis, I like how the dad’s eyes pop madly in the third panel. Like he ignores Curtis so thoroughly that he thought he was alone and suddenly there’s a terrifying voice right there.” –BeckoningChasm

“A veritable smorgasbord, it is! Who are the Floating Hearts of Love for? Loose-Shoes? Bookworm? Shelf Ass? Blindy? Don’t commit just yet, Francis. Sit by your mother’s window a few more hours and you’ll see a hundred more freakish oddities … er, hot chicks! And be served a home cooked meal, to boot!” –handsome Harry Backstayge, idol of a million other women

“Is there a more joyless character on the comic strip page than Curtis’ dad? I mean, even the residents of Westview take mild, smug delight in bad wordplay every once in a while. Greg’s existence is one of being miserably slumped in front of the television, punctuated by occasional bouts of openly hating his oldest child. If Curtis had any love for his father, he’d quit sabotaging his attempts to smoke himself to an early grave.” –TheDiva

“That is clearly a rare Russian nesting doll with an ugly baby face painted on it, and Rex stole it from a booby-trapped tomb somewhere. It’s so perfect it belongs in a museum!” –Steve S

“‘We’ll leave you two alone then, so that we can go engage in non-stop carnal pleasure, because that is what hu-mans always do in these meat suits! Tee-hee!’ Meanwhile, on the far end of panel 2, we see another member of the Away Team in its normal physiological form, awaiting its next shift as ‘Ed’ or ‘Evy.'” –seismic-2

“We can enjoy delicious leftovers for days afterward! Weeks, maybe! I’m never leaving, by the way. I already made copies of the keys.” –Doctor Handsome

“This clearly depicts the crucial Pre-Animal Apocalypse period when the guns were taken away and the farmers were forced to use sticks to defend their livestock from the fox hordes. Fundamental transformation, indeed. Thanks, Obama.” –Mikey

“Wow, we get to watch Mary and Olive sit through church for a whole week. We FINALLY DID IT! We finally found something more boring than real church!” –DimensionalOtter

And that’s all for 2015, y’all! Remember, if we’re all extra good, maybe Santa will bring us a Kwanzaa storyline in Curtis this year.