Hey all! Remember Finger-Quotin’ Margo, a beloved Apartment 3-G gimmick from yesteryear? We had a lot of fun with her on this site, and I’m here to tell you that this fun can continue! Look at this lovely cross-stitch that I got from faithful reader and longtime fan Maggie Eismeier! 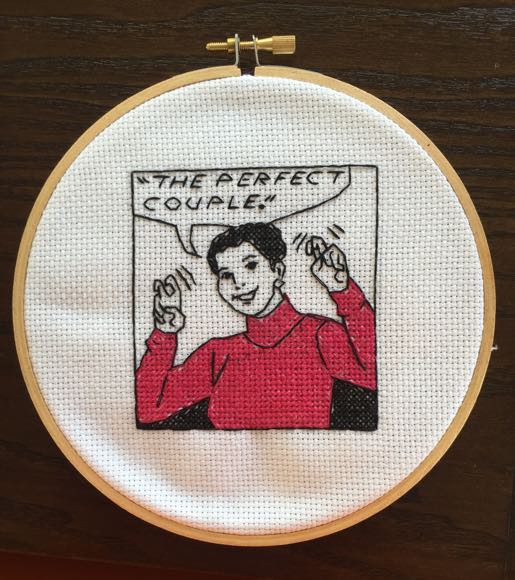 I am planning on auctioning this piece of art off to benefit a local cat rescue organization that helped us with some stray kittens who ended up in our backyard, once they and I get some administrative stuff together. BUT, you should definitely get in touch with Maggie for all your needlepoint needs, via her Esty store! She does custom orders, friends, which I’m sure you have some ideas about!

And with that out of the way, check out your comment of the week:

“I admire Mr. Dithers’ relentless insistence on completely repositioning himself between each sentence he utters, but I really think adding ‘TIME PASSES’ in each gutter would go a long way towards driving the nuances of his behavior home.” –Dragon of Life

“We just got a 10-77 — around the corner fudge is made! Let’s roll!” –Tigernan Douglas Quinn, on Facebook

“This doesn’t seem right. Shady stole ten rings and then dropped all ten over the side of a cruise ship, as Slylock conveniently saw the whole thing? Don’t you get it, Slylock? This was a set up! Shady wants to solve his Slylock Fox problem permanently. Get out while you still can! Time permitting, try to save Max.” –Joe Blevins

“Snuffy is why fracking has such a bad rap.” –Garnet

“I like that Mark makes no mention of going to get help if he gets out. Nope, he’s just going to swim back in and let them know that there is a way out, and that if they are strong of body and spirit then they are worthy of seeing the great surface land once again. Well, not Gabe, obvious: he’s cave cricket food for sure.” –pugfuggly

“In the flick of a light switch, Henry grew silent, squinting at Dennis and Ruff standing side by side, like brothers. ‘Dog people?’ Henry mused, over and over, for the first time suspicious about why Dennis bares a stronger resemblance to this dog than his own father.” –sporknpork

“I had no idea Sarge was a marsupial. The man is a rich tapestry.” –Dan

“And when the military tribunal asked Sergeant Snorkel just whose face he had peeled off to wear as his ‘war face,’ he just told them to check the list of retired Beetle Bailey characters on Wikipedia. ‘Pick one of them. You can’t call it a crime if no one’s ever going to miss them,’ Snorkel shouted as the guards hauled him out. ‘Mort said I could take their faces! He said he wasn’t using them anymore!’” –Voshkod

“Sometimes I wish some strips didn’t worry so much about long, arcing stories and get back to their daily jokes. Sometimes I wish strips with daily jokes explored a story. Today’s Shoe would be the second case, not because I want to see this ‘raising my bride’ thing myself (ew), but to find out if they could set the record for getting dumped by all major papers the fastest. Every strip has to die, might as well achieve something on your way out.” –Brady

“I must admit I’m tickled by the idea that Dithers hauled the poor IT guy all the way over to Dagwood’s office so he could make that joke. I imagine he commanded they walk through the hallways in dead silence so as not to interrupt the wordplay.” –Steve S

Gil Thorp: “This is the only teenage student who argues with his mother so he can go to school? I’m tolerant of race, religion, orientation and all that, but this pro-education teen is taking me outside my comfort zone.” –hogenmogen

“I’ve changed the channel, but Mr. Wilson is stuck on HBO No Go. The TV’s turned on, but Mr. Wilson’s tuned out. I’m watching Showtime while Mr. Wilson’s in no-time. Who needs film noir when Mr. Wilson stars in The Big Sleep? Uhm, is that enough takes for today?” –Dood

“As usual, Marvin missed the joke. It’s not ‘Is this your signature on all these bogus purchase orders?’ It should be ‘Is that you in the video shitting on my desk?'” –Lawyerbob

“And just as Chip turned his head to chat with his girlfriend, Trixie went under! It only takes a second of inattention, folks! This public service message sponsored by the good folks at Hi and Lois.’ –Chrissy the Stooges Woman

“‘I told the manager that just because it’s called eau de toilet didn’t mean we should actually put it in the toilet,’ the bartender thought sadly. ‘And also that Ladies’ & Dogs’ Night was a bad idea. Well, here’s to another Thursday of cleaning up both human and animal vomit.'” –Spunky The Wonder Squid