Hey all! First off: I’ve know there’s trouble seeing and posting comments on the mobile version of the site. I’m not really sure what’s going on, and Adam my web design guru is at a conference this week, but hopefully it will be resolved soon! Huge apologies.

IN MORE FUN NEWS: You are probably aware of my monthly live comedy show in Los Angeles, The Internet Read Aloud, because I keep telling you about it! BUT DID YOU KNOW: it’s on a NEW NIGHT at a NEW TIME — the first Friday of the month at 8 pm, to be exact? So no more complaints about “Oh, it’s on a school night” or “Oh, I can’t get there after work in Los Angeles’s notorious traffic!” Now you can drive there in a leisurely fashion and park in The Clubhouse’s huge free parking lot, or perhaps take the Metro Rail Red Line to Vermont and Sunset, and enjoy a weekend evening of Internet-based comedy fun!

There’s also a FUN NEW POSTER, created by the great Matt Lubchansky. And our next show is ONE WEEK FROM TONIGHT, and has many extremely great acts! 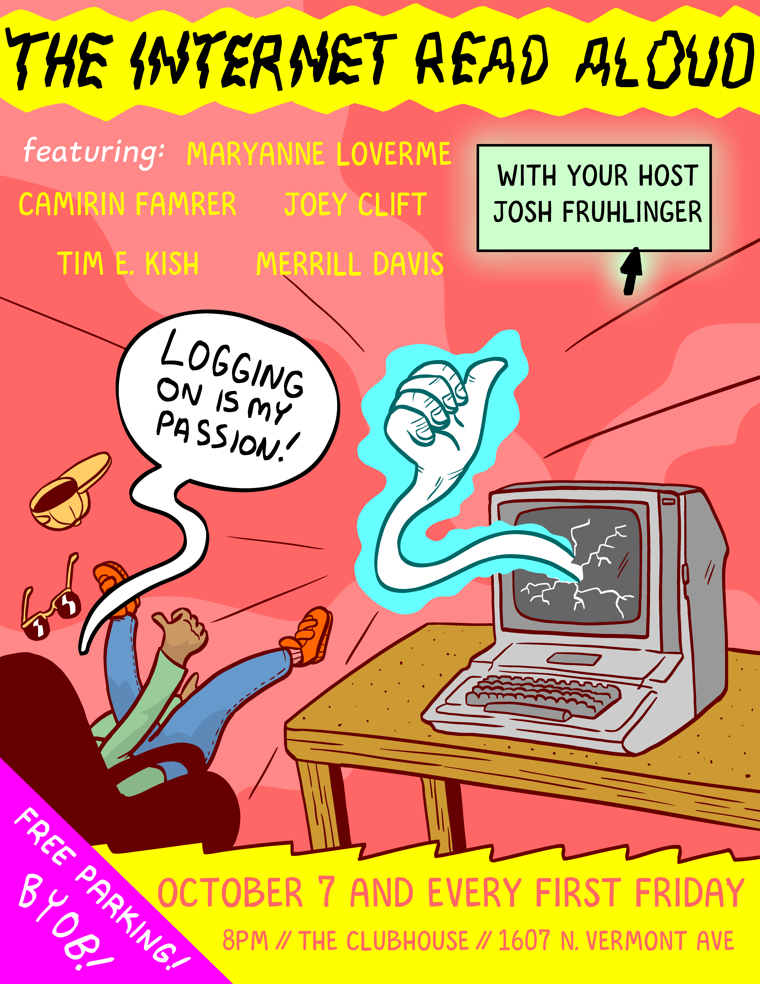 “When an object shows up in Charterstone, it’s a clear signal that the object is no longer edgy. Farewell to the hipness of square plates.” –Poteet

“And now we continue our lengthy story of two powerful superheroes trying, and nearly failing, to get places. Oops, Elihas Starr already took over the world, aided by his newfound control of the press and a reliable Toyota Camry.” –BigTed

“Look, just because you put it on a coffee mug does not mean Dick Tracy is part of the Marvel Cinematic Universe.” –Dragon of Life

“I’ve always pictured Hagar the Horrible as a strip that’s mostly a (spoiler alert!) Jacob’s Ladder-style hallucination. The occasional strip with see with Hagar and Eddie on a tiny desert isle — that’s the reality, with both of them the survivors of some horrible cruise ship disaster, after which they were able to save themselves by latching onto a trunk filled with a few Viking-themed props set aside for kjøttboller night. Everything else is just a hallucination from one of the two dying men, which explains not only the strip’s anachronisms but also why their world seems less rooted in a deep knowledge of Viking history and more like what someone would come up with after riding Maelstrom at Epcot once.” –Mike

“Moving on now, Congresswoman Bellowthon. What do you say to the accusations made by some that with your powdered wig, pearls everywhere, and ruffled shirt cuffs that you are, in fact, a spy dispatched by King Louis XIV’s court?” –Chareth Cutestory

“I’m having trouble sleeping too. If you can explain how Plato fits his oversized body into that grotesquely undersized baby bed, maybe I’ll stop having nightmares.” –Steve S

“There’s something that makes me laugh about the image of Ant-Man and Spiderman stealthily keeping their heads down even as they awkwardly hoof it across this spacious lawn up to the house, in full costume, whispering loudly to each other about their secret identities, seemingly planning to just knock on the front door and shrewdly proclaim ‘Candygram’ like SNL’s Land Shark. At least there will be a fine, fine picture on page six of tomorrow’s Bugle showing Elihas Starr blowing off Spider-man’s head with a sawed-off shotgun through the peephole.” –Jack loves comics

“Two bedrooms for the kids, two bedrooms for home offices, a bedroom for June, and a lab for Rex where he works late into the night trying desperately, against hope, to reproduce human-like emotions.” –pastordan

“In a mounting state of cultural panic, Crankshaft’s wordplay grows ever more desperate. ‘Do they offer Ballet Parking? If this were in outer space, would they be Dancing with the Stars!? You Make Me Feel Ted Danson!?!’” –Peanut Gallery

“Weird that June should feel the need to emphasize the word ‘play’ when she mentioned ‘a loft for the kids to play in.’ Maybe Rex was thinking, ‘A loft, eh? That might be a good place to set up a sweatshop for the children. I wonder how many iWatches a baby could make in an hour?’” –Joe Blevins

“At last! I, Egghead, have captured Ant-Man! By shrinking him! Which is kind of what he does all the time, so he already knows how to use it to his advantage! Plus he was probably going to do it some time after entering my house, anyway … But, hey, at least I shrunk Spider-Man, too! Because everyone knows that the only thing better than a spider you can see is knowing there’s a little one hiding in your house somewhere and you have no idea where it is… I’m– I’m really bad at this, aren’t I?” –WLP

“I’m a 20 something ex con with a debilitating addiction living in a bland condominium complex with his mother, dumped by his girlfriend and fired from his menial labor job. So almost entirely irrelevant to our culture’s economic, political and cultural interests, yes. Surely. But not technically dead, in biological terms.” –James Dowd, on Facebook

“I’m glad these two newspaper birds are cracking wise instead of investigating that mass grave right behind them.” –Naked Bunny with a Whip

“It takes a special kind of dad to see his child and dog enjoying a carefree existence, and decide to put a stop to it by putting that child to work.” –Red Delicious