Hello, all! It’s the first Friday of the month, and you know what that means: it means it’s time for me to plug this month’s Internet Read Aloud, in Los Angeles, which is tonight at 8 pm! 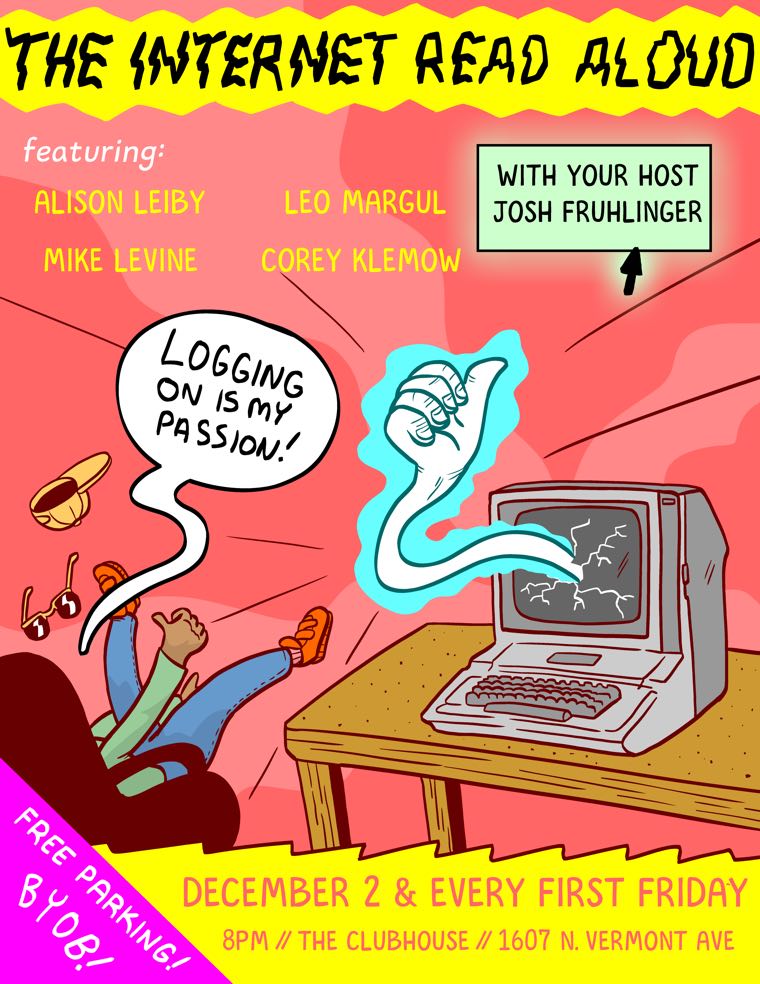 We have lots of funny performers, plus I’ll be talking about the time I first ventured onto the Internet to find love! Don’t miss it! The Clubhouse is at 1607 N. Vermont Ave in Los Feliz, just to the right of the Jons under the sign that says “That’s Shoe Business!” There’s free parking (the Los Angeles holy grail!) and it’s just a couple blocks away from the Vermont and Sunset Red Line station. It’s free! And you can BYOB! There’s literally no reason for you not to come.

Also, you know how I skipped the COTW last week, because of Thanksgiving? Well, I forgot that I had actually been collecting comments during the first part of the week, so those are in this list as well. Apologies to everyone who posted something delightfully funny between Thursday and Sunday. Nevertheless, here’s the week-and-change’s top comment!

“I hope we can have some weeks of Tommy wallowing in self-pity! At 25 he is an ex-con, unemployed and a drug-addict, instead of doing cool things like attending college or dating his mom.” –Ettore

“Right turkey is pretty proud of his viscerally graphic zinger. ‘Sure our organs are going to be pulled out, put in a little plastic bag, and shoved back into our bodies, but…’ (kisses wing feathers) ‘Le mot juste.’” –Dan

“He left the door unlatched and sat in a chair touching the television (the animals would never know that this was not how humans watched tv), holding his stolen property right on his lap, under the interrogation lamp he’d spent the last of his money to have an electrician install. C’mon, coppers, he thought. Make me talk. You’ll see that I’m the baddest punk you ever met. His one hope was that the newspapers got his name, Sick Smitty, right.” –handsome Harry Backstayge, idol of two million other women

“Nice little bit of fanservice in that middle panel. For those that like the female form: MJ putting on a bra. For those that don’t, a stately portrait of Paul Krugman.” –pugfuggly

“It’s gotta be tough when your the lesser brother in a family of entertainers, but at least Shemp Hemsworth is finding work. Perhaps this run on Mary Worth will set him up as the ‘dramatic’ brother and he will find more. It will be small stuff on other quirky indie projects, but he’s gotta bide his time until Marvel realizes the utility of writing in a part for Thor’s younger, more dramatic brother.” –Mighty Captain E

“As you know, but as the vast majority of the audience has little hope of knowing…” –Majicou

“‘Fooom’ clearly stands for ‘fucking boom’ but Mark Trail is a family strip, thank you very much.” –Ruth McIlhenny Gormé, on Facebook

“You know I can’t look at him! He’s just too … beautiful, radiant. He’s like a toasted sandwich angel fallen to Earth. That’s why I’ve created this stalker wall all about him. Oh, Panini, you will be my sandwich some day.” –Voshkod

“Look, Mrs. Lockhorn, we all signed a blank piece of paper with a pencil. We won’t even cover for your husband’s concave head.” –Zooty

“I used to cruise Main Street with all my friends. And by ‘all’ I mean ‘both.’ And by ‘friends’ I mean ‘some guy with a buzzcut and the only kid I knew who was geekier than me.’ And by ‘cruise Main Street’ I mean ‘sit behind what is clearly a cardboard cut-out of a car and pretend we were cruising Main Street.’ Those were the days!” –Horace Broon

“Good. I’m thinking of retooling The Chambers Affair as a vampire romance. Those still popular?” –Kevin on Earth

“The way the models and drawing style are shifting, Rex Morgan, M.D., is on its way to becoming Rex Morgan, Vampire Impersonator.” –Steve S

“Despite expectations Michael isn’t touching that cupcake. He realizes this is a preview of his life for the next few years: everyone else stands far apart bickering with each other while he’s left to his own devices. ‘The apocalypse and the coming reign of my true father, Satan, as foretold by the Book of Revelations can’t come soon enough,’ he thinks. Then, in frustration, he throws the cupcake on the floor.” –Spunky The Wonder Squid

“I wonder if the social media monitor has any other functions, like making ‘Are You A Tracy or a Ketchum? Take This Quiz to Find Out!’ posts on Facebook.” –The Diva

“Henry is upset because once he gets glasses he’ll face his poor choice of drab olive shirt tucked into blue patterned pants” –Philip Moon, on Twitter

“Oh, hey! I guess so! Ha ha, coincidence, eh? Anyway, where is Tommy now if, say, one were an old friend looking for him for entirely non-drug-related reasons?” –James Dowd, on Facebook

“At first I misread panel two as ‘but the poo kinda soiled it.’ My deepest apologies to the authors for trying to punch up your dialogue.” –Chareth Cutestory

“Of course I went to Leningrad in summer. No one goes there in winter. Are you an idiot, McCarthy?” –hogenmogen

“The second panel shows Shoe in his true demonic form in the pink nothingness of Hell. He has no legs and floats around on a purple snow saucer. In the third panel the woman is not impressed.” –nescio

“‘Cliff Anger’” was a kid who loved the Starbuck Jones serials, went insane, and now believes he’s the original Cliff Anger. Everyone falls for his delusion because they can’t bother to do any research. (‘Mr. Anger, Google says you were born in 1916 and died in 1959. How do you explain that?’ ‘Young lady, the hero only seems to die in these cliffhangers! My survival is more fantastic than mere science fiction!’ Cindy Summers would buy that.)” –Droopy Says

“Jeff’s dickishness is matched only by his wife’s feigned ignorance, as she clearly does not want to look for work. ‘Oh, okay, I guess I could get a job … if you think it would help our financial situation. I mean, do you think that’s what our financial situation really needs right now? More money? Okay, I just want to make sure we’re on the same page here.'” –BigTed

“As disgusting as it seems, I think Jeff actually takes pride in the messiness of his underwear drawer. It’s as close as he’s come to creating a work of art. That underwear drawer is his Guernica.” –Joe Blevins