Hey guys, it’s the first Friday of the month, and you (hopefully?) know what that means by now: if you’re in Los Angeles, you are required by law to come see The Internet Read Aloud, a Internet-derived live comedy show I host, tonight! 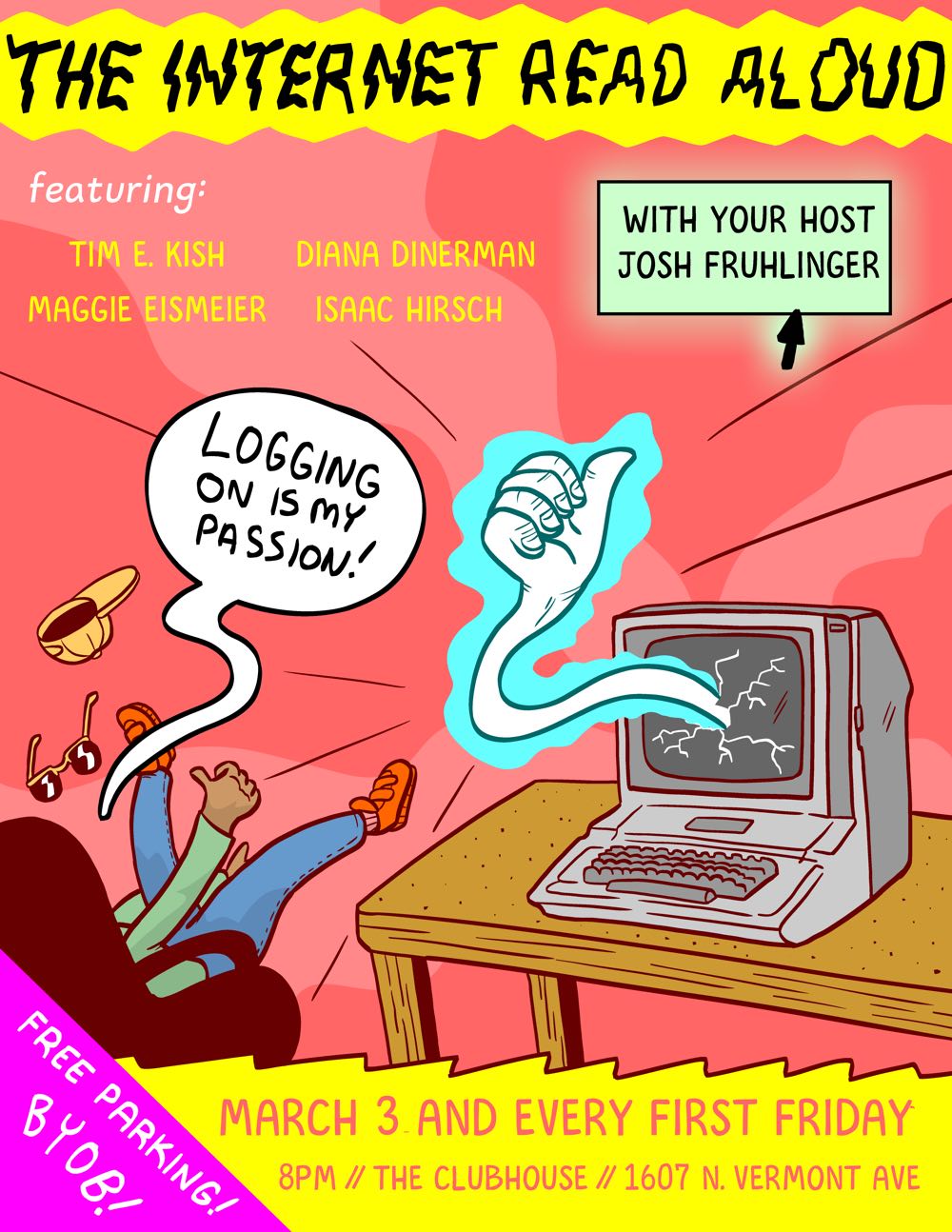 The show, the performers in it: it’s good, and we’re good. Come on out!

And with that sordid promotion of my brand out of the way, I present to you: your comment of the week!

“I like to think that the Spirit is holding the cover for one of those tortilla warmer things that they have in Mexican restaurants. It also pleases me to think that his agenda for the day goes something like this: 1. Crimefighting 2. Fajitas 3. More crimefighting” –Alex

And your extremely hilarious runners up!

“Ed’s there to have his hat surgically removed. I see they managed to get the red windbreaker off, probably with the assistance of a male nurse.” –Rusty

“This whole thing would seem classier if it were in black-and-white and Hagar and Helga spoke in stiffly-translated Swedish. Max von Sydow and Liv Ullmann are both still around, right? ‘Cleanliness is an option available to the least of us.’ ‘Indeed. It might be preferable to keep company with swine.’ [meaningful silence]” –Joe Blevins

“I was just thinking about wolves! And also vampires, fanciful creatures that arise by night to feast on the blood of the living, preferring the youthful as a way of extending their own immortality. [Sips coffee] So … where is Rusty?” –Spunky The Wonder Squid

“Boy, Thirsty there sure has a nice desk and padded chair and a big ol’ window facing the street. Is he Executive VP for Slacking Off or Removing the Last Shred of Hope and Cheer from Employees?” –Pinchers von Shellington IV

“I honestly wonder what a ‘diet’ might be in the context of Hootin’ Holler. Is that when you switch from hog’s fat to rendered squirrel paste on your toast? (And by toast I mean acorn-meal patty).” –pugfuggly

“The image of the Phantom giving birth to Orson Wells is going to haunt me for a while. I assume the man-infant’s first words involved Paul Masson wine.” –Voshkod

“Uh-oh — looks like there’s going to be a primary-colored hat mix-up in Dick Tracy. Chaos will ensue.” –Pozzo

“This is a good place for a product placement. ‘She’s popping Oxycodone like Tic Tacs. And she’s popping Tic Tacs like Oxycodone, because they are so good and refreshing!'” –Ettore

“Subject does not notice or does not care that many kitchen objects are simply floating in empty space. Instead appears to be simply content to interact with miniature dog archetype within the VR ether realm. No discernible value from continued mind harvesting at this point. Suggest termination and incineration as per protocols.” –Chareth Cutestory

“Today, the cast of Mark Trail demonstrates different ways to mishandle an offer in improv after someone in the audience yells ‘bear!’” –Steve S

“It’s 11:00 AM EST. How many times have you dropped the phrase ‘A bear isn’t going to help that at all!’ into conversation so far today?” –seismic-2

“In my memory, the Phantom universally deals with crises in a cool, collected manner even when dishing out brutal justice with gun and fist. I think this is the first time I’ve ever seen him mad, not to mention flame-demon-conjuring hate-drool-producing universe-warping fury. Does he not know there are a lot of tools now that make brand-promotion and content sharing much simpler, especially across multiple platforms?” –James Dowd, on Facebook

“Is that the giant Owl Shrine from Bohemian Grove, secret club of the rich and powerful? If Mark, Cherry, and Rusty run Bohemian Grove, that goes a long way to explaining why the world is so fucked up.” –nescio

“I’m here for you, Tommy. Because I’m your mom and we live in the same house. Actually, it would be hard to avoid talking with each other since we’re the only ones living there. Don’t thank me — I’m glad to do it!” –But What Do I Know?

“Les printing out the single sentence he wrote so far instead of just showing the screen strikes me as an incredibly sarcastic and passive-aggressive way to respond to being asked to show your work.” –Noel