Hey y’all! Today is the first Friday of the month, and you know what that means: it’s time for my monthly live comedy show in LA, the Internet Read Aloud! 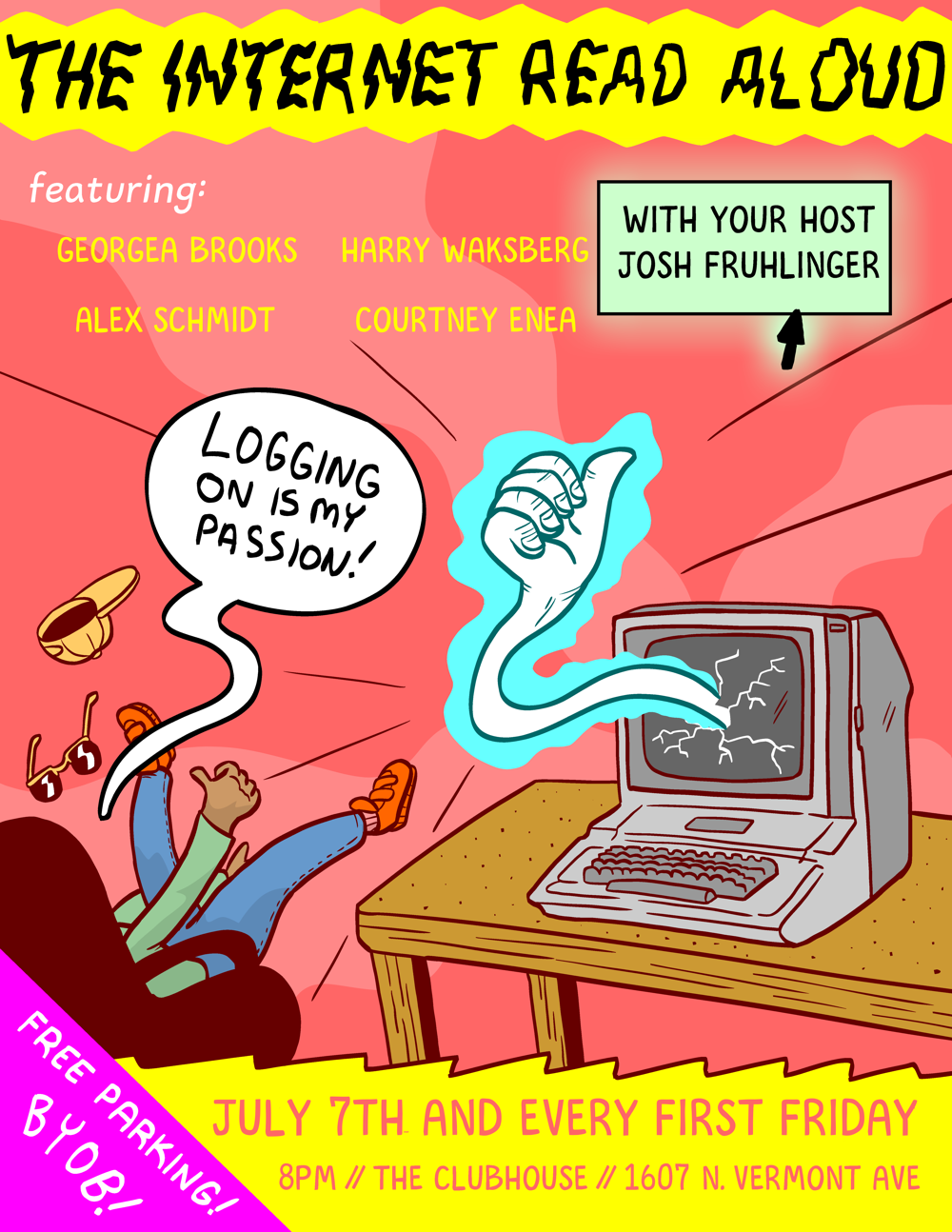 “Teach me? The fool. It is HE who will learn something… about buying term life insurance!” –Lorne Hanks, on Facebook

And your runners up!

“If we’re going to go to an all ‘bantering inside offices‘ format for Mark Trail, can we at least have some of the signature elements of the strip? Maybe a close-up of a fax machine and a potted fern as the discussions take place off in the distance? Or an intern gathering leftover bagels from an executive meeting to store for winter under the speech bubbles?” –James Dowd, on Facebook

“Based on his red cheeks, half lidded gaze, and that he’s lecturing to no one, Hi has been pursuing the happiness pretty hard.” –Alan

“Hi, you can’t fool me with this All-American schtick. I see your Swiss cheese, French bread, and, uh, Enemy-of-the-People cake.” –matt w

“I love that Mary refers to Derek and Esme’s near-affair as a ‘friendship.’ As if those two were just the best of buddies, swapping stories and collecting fireflies in old mayonnaise jars. Mary is the queen of polite euphemisms that are somehow more cutting than just saying the real thing.” –Joe Blevins

“…and make things right between you [hands Derek a 10×10 glossy of him and Katie, but with the eyes scratched out] Whoops, let me try again. [hands Derek a picture of Dr. Jeff] Oh, pardon me. I don’t know who that is. [fumbles in her purse, a length of rope falls out, she spills several unlabelled bottles of pills on the floor. A petrified human finger tumbles away and rolls across the floor of the photo gallery. Mary makes a vague attempt to stop it, but then just waves her hand.] Oh, well. Hey! Ships passing in the night. Small world, me and the Worthies released a folk album of that exact title in 1974.” –Jack Loves Comics

“There are two possibilities. One, Shady Shrew will be very disappointed when he meets up with his fence later today. Two, that’s the recipe taped to the cabinet.” –A Concerned Reader

“With that damned detective and his annoying sidekick snooping around her kitchen, Holly Hippo had to think fast. He’s here about the peaches. He must be on to the laetrile ring. She silently cursed Stoolie Shark for breaking so soon. Last time I get involved with someone named ‘Stoolie,’ she thought wanly. Explain away the peaches. ‘My recipe for peach pie just got stolen!’ she suddenly blurted out. ‘I need it for the contest tonight. It was on a piece of paper from that pad!’ The fox looked up at her with hooded eyes. He pulled a pencil out of his pocket and reached for the blank scratchpad. Why doesn’t he speak? Why doesn’t he ever speak? Holly shrieked in her head. With a helpful yet vulpine grin, he began to run the graphite over the blank page. First in horror, then in numbness, Holly watched the entire laetrile ring appear on the page. Names, dates, location of the farm outside of Juarez. When the little mouse slipped on the cuffs, she didn’t even try to stop him.” –Voshkod

“Who was Toby’s dance partner at the disco? Entertainer Escobar? Mary will put that photo she’s clutching to very good use, once they get back to Charterstone.” –seismic-2

“Is this some kind of executive power move to asset dominance over your underlings? ‘Keep talking, Leslie, don’t stop until I tell you. Here are some topics: walruses! bran muffins! the Louisiana purchase!’” –pugfuggly

“As Gregor Samsa awoke one morning from uneasy dreams he found himself transformed in his bed into an amusement-park executive. In his struggle to escape he was only able to project a single hand through his new chest, which allowed him to maintain a tenuous hold on reality. His quest for sanity led only to horrified looks as his quest disturbed the placid reality of others.” –Droopy Says

“Two weeks from now: ‘Lesley, I’m your friend as well as your attorney, so I have to be honest and tell you that this would be the weirdest sexual-harassment lawsuit ever.’” –Poteet

“I’m loving how intent the Blondie artists seem to be to demonstrate how behind the times they are. I mean, what’s in that glass cabinet? A portable DVD player, a pair of VHS camcorders, a Palm Pilot, and what looks like a disposable film camera. The BlackBerry attached to a watch-strap might actually be the most high-tech thing in that shop.” –Schroduck

“I’m more worried about why Dagwood wants to buy a Geiger counter than anything else. There are safer ways to heat your sandwiches up, I promise.” –Drew Funk

“Time marches on in the world of bird journalism as the Perfesser replaces his trusty Smith Corona with a modern day laptop computer. It’s just too bad he doesn’t have any grandchildren who might explain to him how, with Microsoft Word, he can now edit his articles in-program, and doesn’t have to print out every single lousy draft.” –livingonvideo

“We will drop these fire escapes on ourselves, sue the construction company for damages and use the money to buy ghillie suits!” –Zootyr

“So brave of Cindy to take a stand on something that happened sixty years ago. I bet she’s in favor of Brown v. Board of Education too! Crazy!” –Mysterious Shirtless Lawyer

“This plugger will only eat the pluggeriest potato-chip flavor of all: plain. Sour Cream and Onion is for liberals; Salt and Vinegar is for Europeans; and Barbecue is such a travesty of the true American cuisine that he won’t even speak its name.” –BigTed

“Dennis distracting everyone from a drowning beachgoer frantically waving for help with ‘my dad is so old’ jokes: Menace level: Extreme.” –Dread