‘Tis the first Friday of March, and like all First Friday’s it’s that magical day known as Internet Read Aloud Eve! Please attend my delightful comedy show in Los Angeles, California, if you enjoy funny people making hilarious jokes about … the Internet. 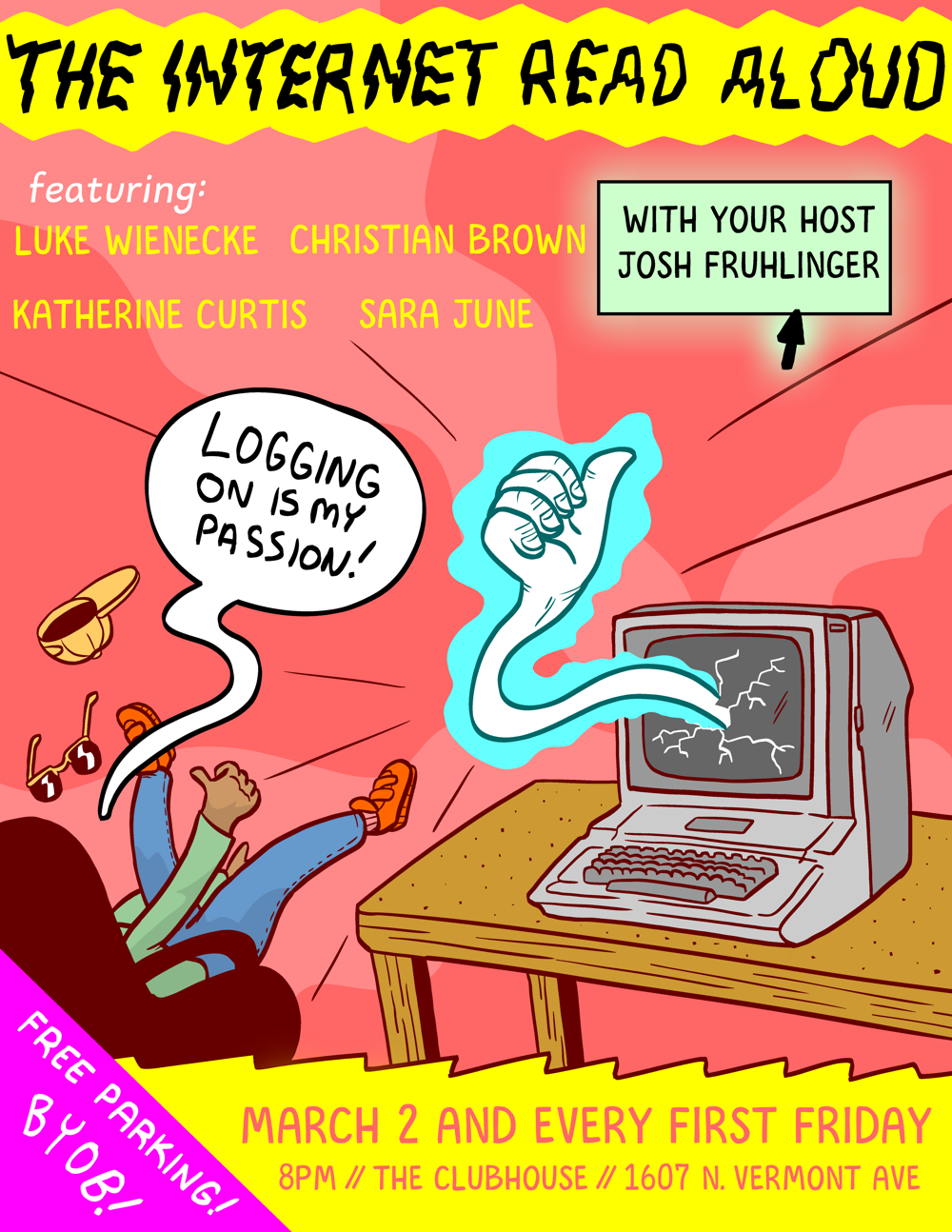 Here is the Facebook event, please check in and then subsequently attend!

Also, it is just Friday in general, so that means it’s comment of the week time!

“What the hell is all that stuff Darin and Jessica are taking with them? Gas masks? Hazmat suits? Immunological bubble? A completely supply of drinkable water and canned goods to avoid exposure to Westview’s poisons? It won’t work of course; they’ll be dead within hours.” –Nekrotzar

Your runners up are also a delight!

“It’s nice that we have Sunday comics, where writers and artists can really go beyond the usual limitations of the form and really explore more creative space. If this were a weekday, we’d probably only get a panel or two of the aftermath of the vomiting of a ham sandwich, but today we can find out so much more: the journey that the masticated ham and cheese took, the fact that it was both ‘weird’ and ‘gross’, the wider impact that the vomiting had on individual students, as well as the student body as a whole. I’ve never thrown up a ham sandwich myself, or have even been witness to it, but somehow, now I feel that really I have.” –pugfuggly

“Ha, remember when people used to read the Sunday funnies while enjoying a nice breakfast? I bet everyone’s glad they don’t do that anymore.” –BigTed

“Beetle Bailey is surprisingly accurate today. ‘Any person subject to [military jurisdiction] who behaves with disrespect toward his superior commissioned officer shall be punished as a court-martial may direct.’ –Article 89 of the Uniform Code of Military Justice. Can be punished with up to a year in jail and a dishonorable discharge. I like this new direction of Beetle Bailey’s Adventures with the Judge Advocate General.” –Voshkod

“Thanks for the tip, Sly. After all, public schools are massively overfunded, so it’s no issue for me to throw all these pencils away and order a fresh batch. Speaking of getting rid of things, why are you here in my school and how soon are you leaving?” –jroggs

“Marty doesn’t understand ‘product placement’ means referring to a brand in his call of the game, not simply referring to the generic product they sell. ‘Los Morenos burritos’ is product placement, ‘burritos‘ is not. I didn’t expect this story to segue into a frank discussion about the long-term cognitive damage caused by excessive alcohol consumption, but that’s clearly where Gil Thorp is going with this.” –Truckosaurus

“Pluggers have to wait for their tubes to warm up in more ways than one, my lad.” –McManx

“‘Mark, did you say seriously?‘ asks the sheriff, as he squirts Mark in the face with water from the flower on his lapel.” –seismic-2

“When you have a mouth but you still can’t scream” –Anne Elisabeth Dillon, on Facebook

“Wilhelm almost died in the ER because as he lay there on the trauma table screaming all the doctors just kept telling him what a comic genius he was. Luckily, he eventually passed out from the pain and they went straight to work.” –Rob

“Otto is displaying human levels of self-deception and rationalization. I’m pretty sure he sticks around for the food.” –But What Do I Know?

“Some might say that if you start to feel run down all the time, you should be checked out by a doctor. Fortunately, Pluggers is here to set you straight!” –A Concerned Reader

“It says something about the triteness of Shoe that, instead of being amazed at reading a newspaper cartoon about group sex — a cartoon that wouldn’t necessarily be about fucking if its characters were any other kind of animal in existence — I keep focusing on the impracticality of bolting a desk chair independently of the desk to the wood floor, two feet from a chalk board but near nothing else.” –handsome Harry Backstayge, idol of a million other women

“Pluggers are hard working and industrious, except for the vast majority of time when they’re not.” –TheDiva

“The main reason not to have the conversation where M’Sieur Pepper can hear is because the chef knows how angry he gets when you don’t acknowledge his Ph. D.” –Andrew

“Yeah, the kids these days don’t really drink coffee anymore, they just like to get a nice tall cup and sniff it.” –Anonymous

“Nip this in the bud right now, Kelly. Years from now, when you’re married to Niki, you don’t want to spend valuable time mashing up food into a fine paste so that your husband’s idiot friend won’t choke to death during dinner.” –Joe Blevins