You know the drill by now, everyone: next Friday is the first Friday of the month, so it’s time to add the Internet Read Aloud to your Los Angeles to-do list: 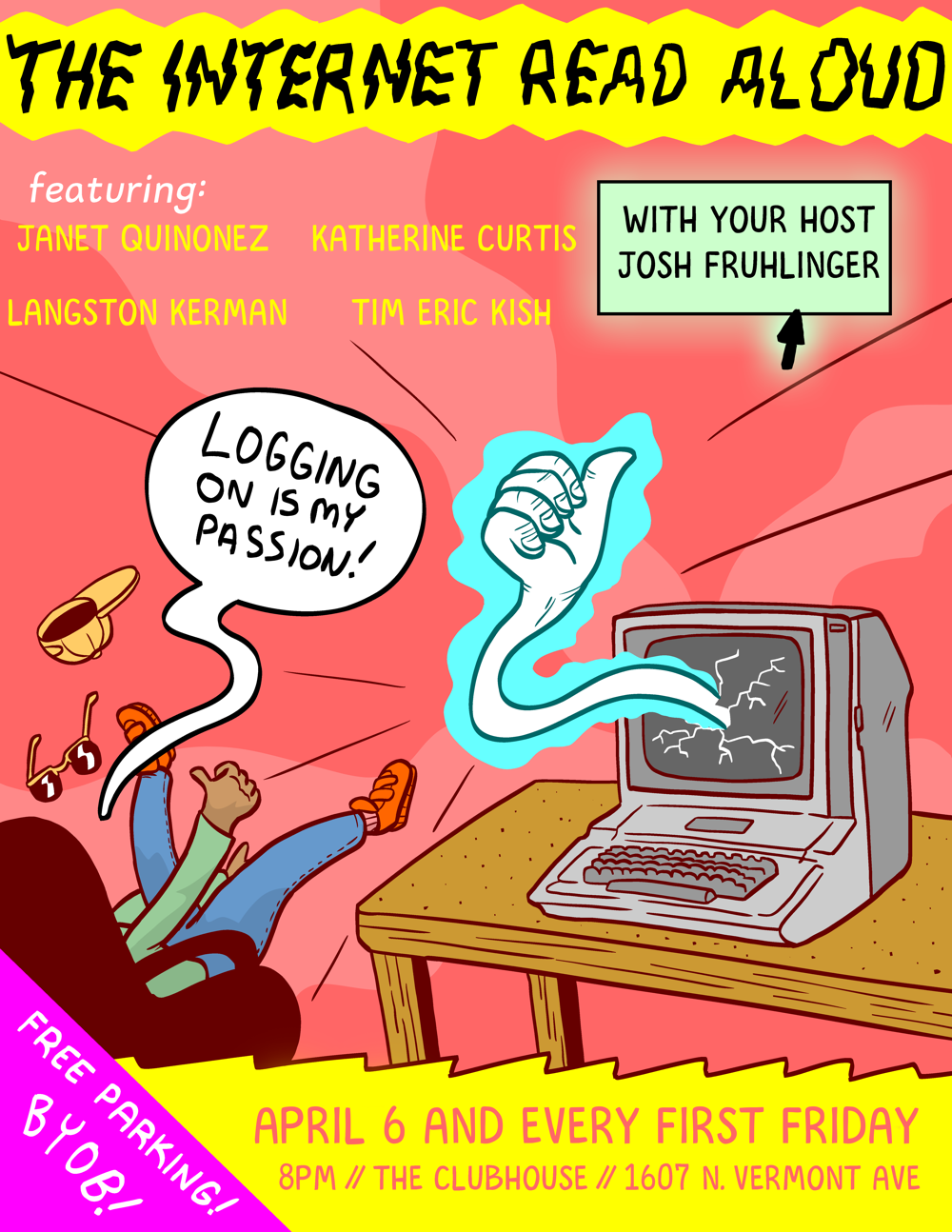 Also you should add “enjoy the comment of the week” to your calendar as well:

“Do you know what craftsmanship is? What pride in your work is? It is meticulously drawing the blackheads that pock an old man’s nose. The liver spots that mar his forehead. That is truth. That is art. That is Crankshaft, a true labor of loathe.” –Voshkod

The runners up? Also worth fitting into your schedule:

“‘Lookout Point?’ says Wilbur quietly, his eyes shifting. ‘Are you going to kill me, Mary? Or is this pity sex?’ Mary’s grip on the wheel tightens as her eyes stay fixed on the road. ‘Honestly, Wilbur, I haven’t decided.’” –lorne

“We’ve suspected it for weeks, and today’s inspirational quote confirms it: Wilbur is going to cope with his loneliness by following Dawn to Europe and headbutting the first Italian he sees.” –jroggs

“When Mary says ‘We all make mistakes,’ she realizes hers was letting him in her car.” –Maltmash3r

“Jesus, guys, you’re supposed to say the promo code. We talked about this.” –Joe Blevins

“The numbers are now in, and this one hideous ‘cartoon’ has negated over 7,500 cute puppy photos on Facebook alone.” –Mark Taylor, on Facebook

“I wish I could read any of the words in this strip at all, but my eyes are just transfixed on the angle that chair reclines and the width of the headrest. Is that was first class is like? I don’t care what he’s done in the past, I am firmly on Team Nomad from here on out.” –pugfuggly

“I’m charmed by how Milford is so unswervingly polite that the worst insult a pirate radio heckler station can come up with is ‘We don’t like you, Marty Moon!’ In a town where everyone is on full-name basis with everyone, this is truly the height of disrespect. No wonder Marty Moon has a drinking problem so often, if he has to live with a world where his rivals don’t like him.” –Enlong

“How are you doing? Life still in shambles?” –TheDiva

“‘Try the mirror.’ What a Shyamalan twist! Mr. Wilson was the glasses all along!” –Ettore

“Does whatever a spider can! Like being gently guided away from danger by middle-aged editors. If only JJJ had a glass and piece of cardstock.” –Janna L., on Twitter

“Are you trying to get yourself killed, man? Because if you are, I’m totally into that! Talk about SPLOOSH! Dead Spider-Man = clean-up, aisle Jameson!” –els

“The only probable cause Tracy needs to knock a confession out of someone is that they refuse to wear a colorful hat.” –BigTed

“Funky Winkerbean: where even the pizza looks like it’s about to commit suicide.” –The Mighty Untrained FOOZLE

“Wow. They can text restraining orders now?” –But What Do I Know?

“The only reason anyone would send a nude pic in the Funkyverse is to provide evidence of their melanoma diagnosis.” –nescio