It’s that time of month again: the time when I let you know that the Internet Read Aloud, my live comedy show about the Internet, is happening tonight! Do not, miss it, if you are in Los Angeles! 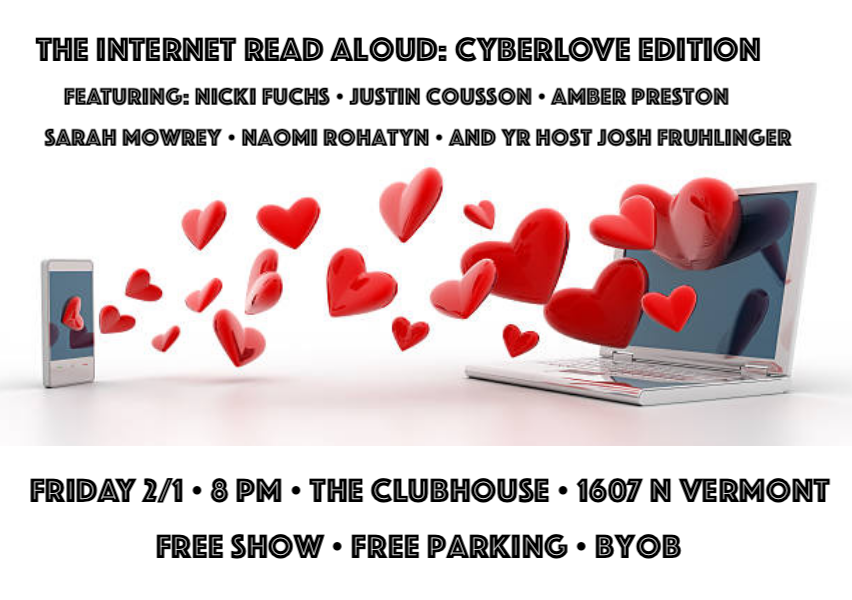 Wondering where the hilarious runners up are? They’re right here, my friends.

“Marriages are like sharks. Dull eyed, ever plodding forward — until your eyes roll back and you lash out violently.” –Foodar

“There’s so much that makes this the best Mary Worth arc since Entertainer Esme, but my favorite has to be how we spent a week on ‘Don’t let that first easy assignment fool you, Professor Cameron is really tough!’ only to find Ian frowning morosely and agonizing ‘How can I fail Jeannie? She’s so nice!’ Jeannie really didn’t need to take on the emotional labor of pretending to be interested in Ian; any excuse would have worked.” –TheDiva

“Readers whose papers don’t carry the Mark Trail throwaway panels on Sunday are really missing out. I imagine Mark is saying this to Cherry. It’s early in the morning, and she’s just woken up. Mark’s been standing next to the bed for hours, preparing for this exact moment.” –Joe Blevins

“Simpler explanation: the look on his face indicates that he’s attempting to use a mobile phone.” –Horace Broon

“Whether you’re a female West Coast millennial college student or an elderly unemployed Appalachian man, some things (stomping angrily away muttering to yourself about how everyone else is to blame for your problems) are universal. Kudos to Mary Worth and Snuffy Smith for bridging the cultural divide.” –Schroduck

“It’s really an indictment of our education system when some students get to college ready to seduce their teachers for better grades and others arrive without the faintest idea of what flirtation and seduction even look like. Isn’t the SAT supposed to determine college readiness?” –FeralCanadian

“Just imagine what despair the people at the ‘Cat Foo‘ factory must live in that they can’t even shake themselves from their depression to fit the product’s generic description on the cover. (‘It has a picture of a cat, people will figure it out. Let’s go get hammered.’)” –handsome Harry Backstayge, idol of a million other women

“An F!? I need to re-examine this series of bad life choices I’ve made, and get my act together!” –Just John

“‘&%$#@/‘ is how the teens today are saying ‘a legitimate reason for giving me a failing grade.’” –John Salerno, on Facebook

“So this is what happens when an unlovable force meets an immovably awful judge of character.” –jroggs

“I’m really disappointed that we won’t see the explosive graffiti written by these badass kids. I’m guessing it would be something along the lines of ‘OR MAYBE NOT? THE SITUATION ACTUALLY MIGHT BE A BIT MORE NUANCED THAN WHAT IS BEING PR-‘ (at which point they run out of room).” –pugfuggly

“Well, we don’t need a ladder to get higher! [They start huffing the spray paint]” –Ettorre

“The fingers on the backscratcher have uncurled between panels one and two. The cursed artifact that grants you wishes, but fulfills them in the most terrible way, has been passed on to its next victim. (Snuffy wished to be known across the country and didn’t realize that it would be for making jokes like this.)” –matt w

“Where did Snuffy get the money to buy a nice, store-bought backscratcher? I figured he’d make do with rolling on some broken glass, or the severed, mummified hand of a Barlow.” –Guillermo el Chiclero

“The first draft of this strip was Barney saying, ‘Yer sure usin’ that backscratcher. They should call you … Scratchy Smith!’ But the key to great writing is rewriting until you nail it.” –Jenna

“So for these reasons and many more, I feel that I deserve an A on this assignment.” –Chyron HR

“This storyline is starting to read like it was written by Nick Pizzolatto. All questions and no answers. Are we supposed to judge this naïve college student as hopelessly pathetic for choosing expediency over the hard work or deciphering ancient texts? Are we supposed to feel sorry for Ian because he was briefly taken in by this jezebel but then admire his academic integrity while relating to his deeply welled feelings of longing for any sort of female companionship? Is this just searing but subtle dig at the pathetic ways state colleges deal with their Title IX obligations? Or is this all an elaborate set up that finally instills in Toby the courage she needs to finally extricate herself from a flawed and distant partner? All we need now is a time jumping sequence or two before the whole thing is abandoned all together for a more linear story next year about Mary’s quest to buy Jeff a birthday gift that says simultaneously says ‘yes, we’re together’ but ‘no, I’m not quite ready to commit.’” –GdBenz