It’s about to be the first Friday of the month, folks, and you know what that means: you should come see my live LA comedy show, The Internet Read Aloud, one week from TONIGHT! 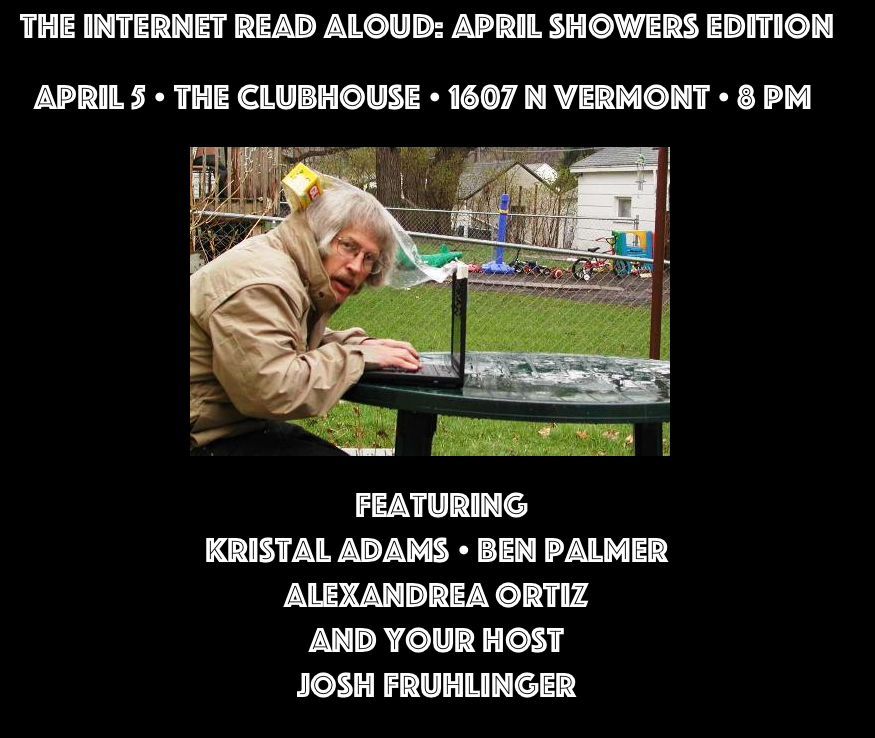 Here’s the Facebook event! I promise you will regret nothing!

You definitely won’t regret reading this comment of the week:

“Also coincidentally, The Troublemaker’s Twin was a series of books for older children about a polite, rules-following boy who was often mistaken for his mischievous look-alike brother, resulting in hilariously sticky situations. They were based on real-life brothers, one of whom, shockingly, grew up to be a serial killer who mostly struck on airplanes. Which one was it? That’s something for them to know and Rex to find out.” –BigTed

Nor will you regret enjoying these hilarious runners up!

“I find the use of an Edgar Allan Poe quote here ominous. Somebody’s not making it out of this story alive.” –Noel

“He seems nice. And the ripped upholstery shows that he really does like cats!” –seismic-2

“Dick Tracy’s police state dystopia may have brutally crushed the unions, but there’s always a loophole. The teachers can’t go on strike, but their pets can. Rise up, hamsters and gerbils of the classroom! You have nothing to lose but your leashes!” –Schroduck

“I can believe a lot of things, Dick Tracy, but there’s no way in hell I can suspend my disbelief far enough to believe that a sports columnist for a newspaper lives in an apartment that large in Chicago.” –Dread

“I would argue that the ‘worst part‘ is the murdering.” –A Concerned Reader

“In the last panel, Mohawk Guy is reflecting on that time someone asked him what he was doing this weekend and he said ‘Just family stuff.’ He is marveling at what a perfect response that was, how it satisfyingly answered the question. ‘That explains things,’ indeed!” –Jenna

“Snuffy looks down on other West Virginians wanting to keep their coal jobs, since coal is too modern and innovative! Fight to keep our charcoal jobs!” –Ettorre

“Even though basketball season just ended, I’m staying in condition. Watch me dribble this hamburger!” –seismic-2

“I assume everyone is smiling in this strip because no-one can hear Dennis. More cymbals! I can still make out the upper register of his voice!” –pugfuggly

“I like that JT is supposed to be the ‘good twin’ and all we know about his alleged moral superiority is that he talks endless amounts of shit about his brother with strangers. TJ was an abrasive lout, but he never once defamed his family.” –jroggs

“My two boys … my two boys … Could they be twins? I’m not sure. Let me think back on my medical training. Twins are … born at the same time, right? I think we only got the one when June went into labor. Did we get two? It was a while ago; I don’t remember. We could’ve gotten two and given one away, right? And maybe we wound up adopting him. That could happen. What a wild story that would make! But if you put one up for adoption, are they not twins anymore? Maybe that’s what makes them stop being identical twins, and turns them into fraternal twins? It’s all kind of hazy. I’ll check Gray’s Anatomy when I get home and see if that’s got any answers. I’m sure glad I have medical training. Twins! What a crazy thing, huh?” –Larry McAwful

“JT’s eyes are exactly the same colour as his moustache. No way is he the good twin.” –Mantha

“Is that Beetle’s beret? His hair? Do the two somehow combine to make an inside-the-helmet helmet? This is the real abstraction. Well played Browne-Walker, Inc.!” –Bobby Sneakers

“Ah, hell. Ditto’s got the rabies, he’s foamin’ at the mouth. Time to put Young Yeller down, Chip.” –Voshkod