Hello, joke-enjoying humans! Would you like to see me and many other funny people tell jokes about the Internet one week from today, as is our wont? Well come to the Clubhouse in Los Feliz, Los Angeles, California, and all your needs will be met! 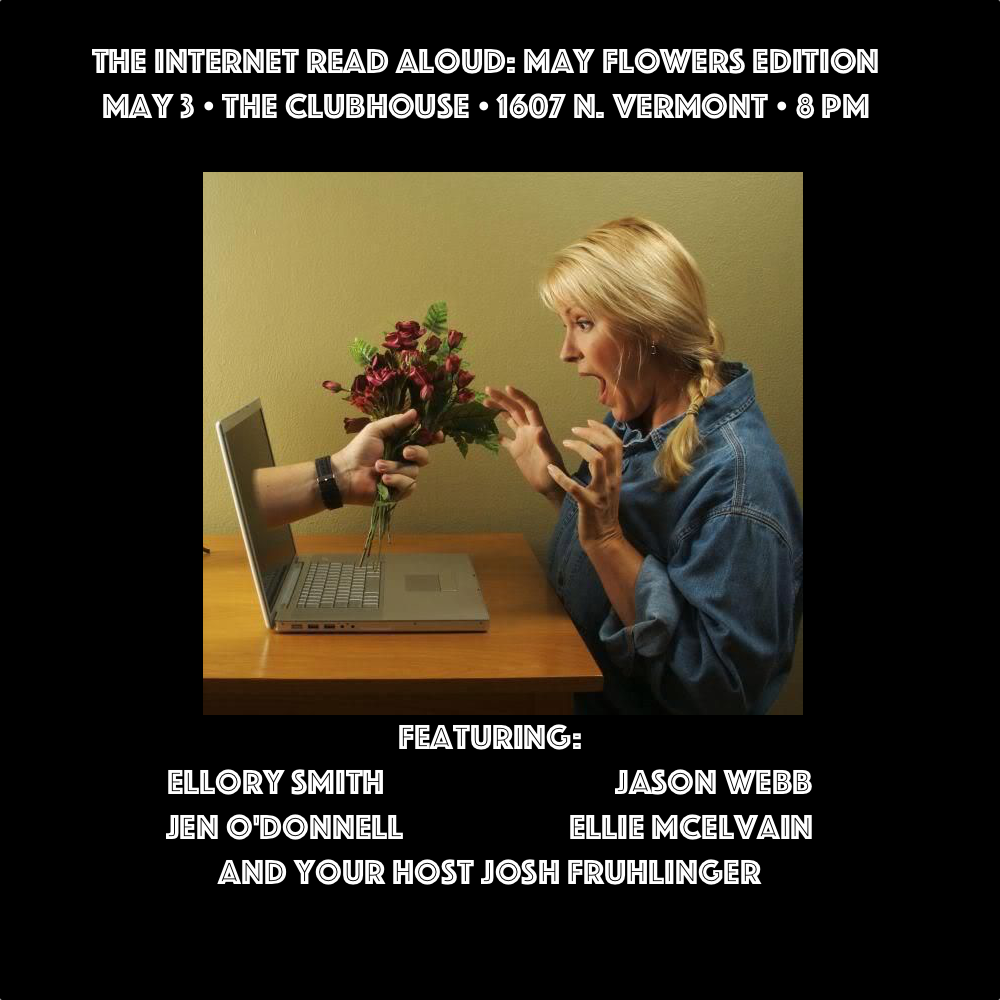 “All the clues are there. Dan’l, as in biblical Daniel — whom only God judges — is gone, presumably to his judgement. Much like Snuffy’s midnight trek to the mill, sleepwalking leads poor Amina to her near death at a mill in Bellini’s La sonnambula. And when pressed, Snuffy drops the Ace of Spades, the death-card. Yes, Snuff and his card-playing friends have been dead from the start. Truly M. Night Shyamalan’s The Snuff Sense rewards repeat viewing.” –Voshkod

“No, Mary, Love Is a comic strip about two naked people. That’s what I want for me and Arthur. I’m sending him that money right now. Thanks, Mary, you’re the greatest.” –Zerowolf

“If you ignore the text in the balloons (you really should), it looks like like Snuffy was facing the difficult choice between starving and eating his dog, but then suddenly decided that he and his dog could eat his wife.” –Ettore

“Like most men who retire before their wives, Alan is visibly disturbed by the prospect of having an on-site supervisor once again. Mark my words: this will lead to nothing but madness, despair, and the completion of house projects.” –pastordan

“As much as I enjoy the ‘sit in a rocking chair in the corner’ punishment trope, I am entirely fixated on whether, at the Gina Ethnicstereotype-o home each morning, after a bracing breakfast of pasta fagioli, the discussion goes, ‘Gina! Don’t forget your headscarf!’ or ‘Ma! Have you seen my headscarf?!’” –Handsome Harry Backstayge, Idol of a Million Other Women

“So did Doc dress as a mountie for any particular reason, or is this just part of his fun slide into dementia?” –pugfuggly

“Another theory: Dennis isn’t on timeout. His new thing when friends come over is to just sit in a rocking chair and spout cliches with a look of contempt on his face. Like when Joey comes over tomorrow, Dennis will just glare at him and say, ‘Power corrupts … absolute power corrupts absolutely.’ Pretty menacing, I’ll give ya that!” –Jenna

“Let’s not screw it up! I’m going to show you one more time, slowly and deliberately, how to do the Charleston!” –Ned Ryerson

“I think if the blond-haired guy had just said, ‘You’re welcome,’ this unpleasantness could have been avoided. But, no, he decided to make a flowery little speech about meaningful interactions. He brought this on himself.” –Joe Blevins

“So if Arthur is such a successful scammer, why does he live in such cartoonishly exaggerated squalor? Because that’s no ordinary squalor. It’s meticulously curated dilapidation, the latest fashion trend, for which well-heeled hipsters are paying big bucks to squalor-lifestyle designers and personal dilapidation coaches.” –Peanut Gallery

“What’s up with Snuffy’s infant-sized head? Everybody else in Hootin’ Holler appears to have a normal, if sometimes lumpy, head. Snuffy’s is small and round. Is he the human equivalent of a Pug dog?” –Lothar of the Hill People

“Dying is merely the gateway to another level of existence, according to the 1970s mystical novel Jonathan Livingston Seagull, which, if that isn’t the birds’ Bible, I don’t know what is. Frankly, I can imagine the Shoe characters in someone’s pad, drinking Scotch and gathering around a hi-fi playing songs from the movie version’s soundtrack, which were written and sung by Neil Diamond. And if Neil Diamond isn’t the Shoe characters’ troubadour, I don’t know who is.” –BigTed

“Roz, her eyes always half-closed in a dismissive state of perpetual ennui that can only be achieved when life has beaten you down and you work almost non-stop in a dead end job where you see some things, wonders why anyone would want to try and avoid the sweet embrace of death.” –Dread

“That withering look! That gun placed close at hand! Alberto Famoni’s second wife: ‘You’ll drop that i from your name, or I’ll shoot it off! Capisce?’” –The Mighty Untrained FOOZLE