Over the years, many have asked me: “Josh, when are you going to make your live comedy show, The Internet Read Aloud, available over the very internet that gives it its name?” Well, all it took was a global pandemic shutting down all live performances indefinitely, because now, two weeks from today: it’s happening, on Zoom, at 6 pm Pacific/9 pm Eastern! 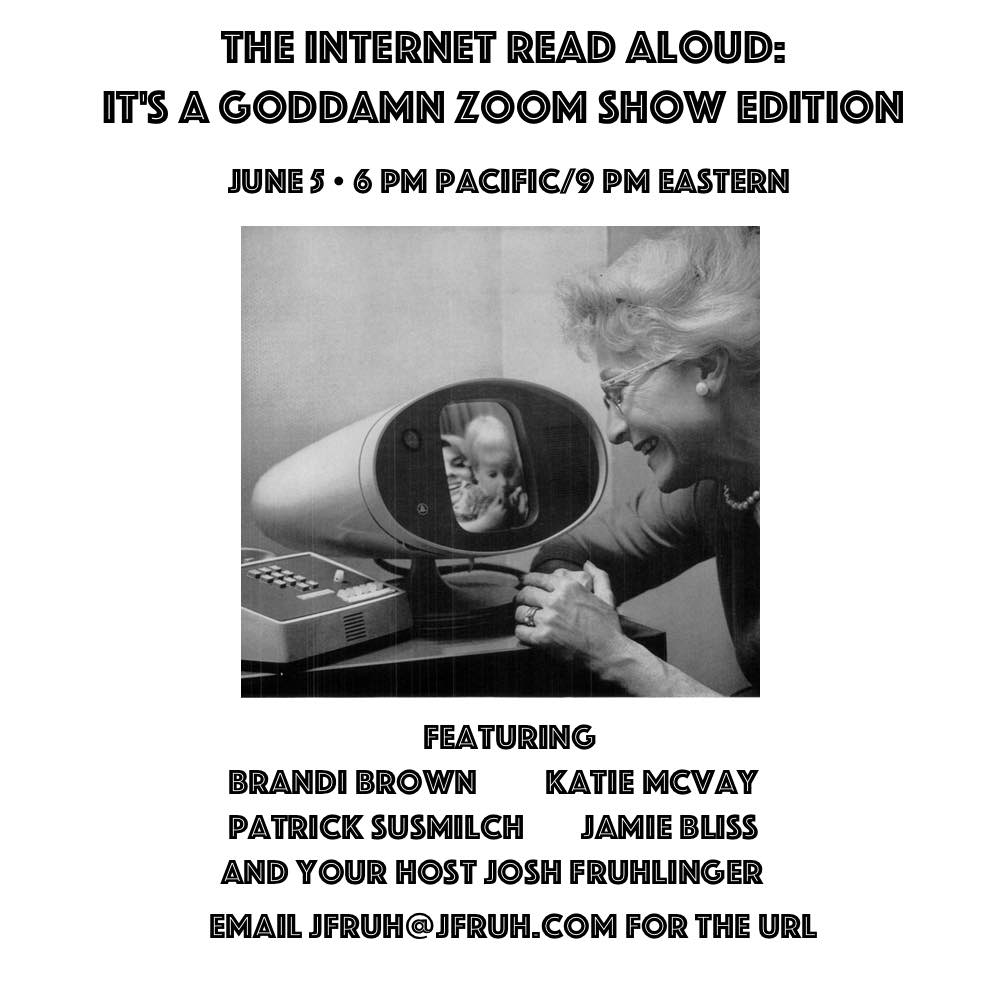 How do you “attend” this show? Well, you’ll need a URL from me, which isn’t ready yet, and the easiest way to get it is to email me at jfruh@jfruh.com and I’ll put you on my list. (I won’t use use your email for any purpose other than letting you know about this specific show.) You can also say you’re going on Facebook, if that appeals to you!

I’ve never done anything like this before, so it’ll be a bit of an experiment, but there are four great comics on the bill and I’m very excited to try it out. So get hyped and I will hopefully “see” you “there”!

But something you can “see” right now with your own eyes is this week’s … comment of the week!

“‘When love is involved, quirks are viewed as charm,’ the star creature mused. It grimaced as it took another sip of the undiluted H20 chemical compound, but endured the discomfort. ‘Another fascinating aspect of your– I mean, our species. Please continue relating these insights about our breeding habits, Earth female Dawn.’ The being from the dark vastness suffered another sip of water for the sake of appearances. Once the secrets of human reproduction were learned, they could be subverted, and the eradication of mankind could proceed.” –jroggs

Your runners up are very funny as well!

“Personally, I would have never thought to have an eggplant-colored lamp next to a toothpaste-colored couch.” –Joe Blevins

“The joke doesn’t even work, as set up by the writer. Dustin starts by specifying that it’s a ringtone to each friend. Then before today’s installment is complete, it’s a ringtone to each phone number. Q: How many comic strip writers does it take to change a light bulb? A: Two — one for each bulb. It’s kind of like that.” –Glycyrrhiza Glabra

“Actually, Mary, it’s ‘Whom did you choose?’ I know that sounds wrong, but ‘I’m with Jared’ sounds a hell of a lot wronger.” –BigTed

“‘Several days later,’ because talking with Mary is an ordeal and is not something you want to do as soon as you step out of the airport.” –Ettorre

“So Margaret is continuing her remote schooling, as all public schoolchildren are required, while Dennis’s parents let him wander around the neighborhood, barging into people’s houses, all the while ignoring his own education? I’d say the apple doesn’t fall far from the menace tree.” –Lawyerbob

“Mrs. Mayor’s Mom is facepalming in that second panel. She can’t believe she has a child so stupid as not to realize that his ‘home-schooling’ will be done online, leaving him plenty of time to troll people with punny nicknames on a Milford subreddit.” –But What Do I Know?

“The Turning Page should be a soap opera strip set in a boutique bookstore that inexplicably has a dozen sexy employees.” –RexDartEskimoPi, on Twitter

“You spent our life savings replacing your feet with those rocket boots, and they barely let you hover, Loretta! You’re what, an inch off the ground? That’s not Iron Man, Loretta, that’s just pathetic. Oh, the lawyer? He’s here to get you committed to the asylum.” –Voshkod

“Yeah, Buck — I gotta go lie down. You’re wearing me out. And call Doc Morgan — see if what I’ve got can be transmitted rectally, because you have been up my ass now for awhile.” –Old (Home) School Allie Cat

“The good news about today’s Hi & Lois is that it would be ridiculously outdated and out-of-touch even without a pandemic.” –2+2=7

“‘Geoff, your work has certainly made a difference tonight in all of these kids’ lives,’ says Mark Trail, in front of a smokey, burned-up forest.” –Clint Brawny

“I like it that the last panel makes it sound like those two facts are related: ‘Yes, with all that dead brush gone, this regenerated forest will make the perfect home for Kevin! Plenty of fresh shoots to graze on, fewer predators — he’s one lucky kid.’” –pugfuggly

“Trying to read Gil Thorp, but I keep getting distracted by how great a title Pardon My Funk, Coach would be a for a terrible 70s blaxploitation sports film.” –Schroduck

“You’re a social creature, Mike. I recommend you go find the biggest anthill or beehive you can, and live there for the rest of your life. Once you gain the insects’ trust, they will welcome you into the colony with open, well, uh, legs but don’t take that in the wrong way.” –Emmet Pismire

“Pretty sure at least one of the kids has been shown playing with a hammer, so why not? Show him where you keep the ropes, the gasoline, the flamethrowers. The injuries that they themselves procure must be their schoolmasters.” –Artist formerly known as Ben

“‘You need to show your pre-verbal sibling the ropes,’ Grandma says for some reason that isn’t at all difficult to imagine. And Jeffy doesn’t understand this expression probably nobody has ever had occasion to say to him before! Ah, young children. They truly don’t have an experienced grasp of idioms.” –pachoo

“Dawn and Mary are talking like Jared is sitting across the the room with a gun forcing them to say nice things about him.” –DevOpsDad