Folks, if you were wondering when my beloved live show, The Internet Read Aloud, would return to the stage in Los Angeles, good news: it’s returning in three weeks! 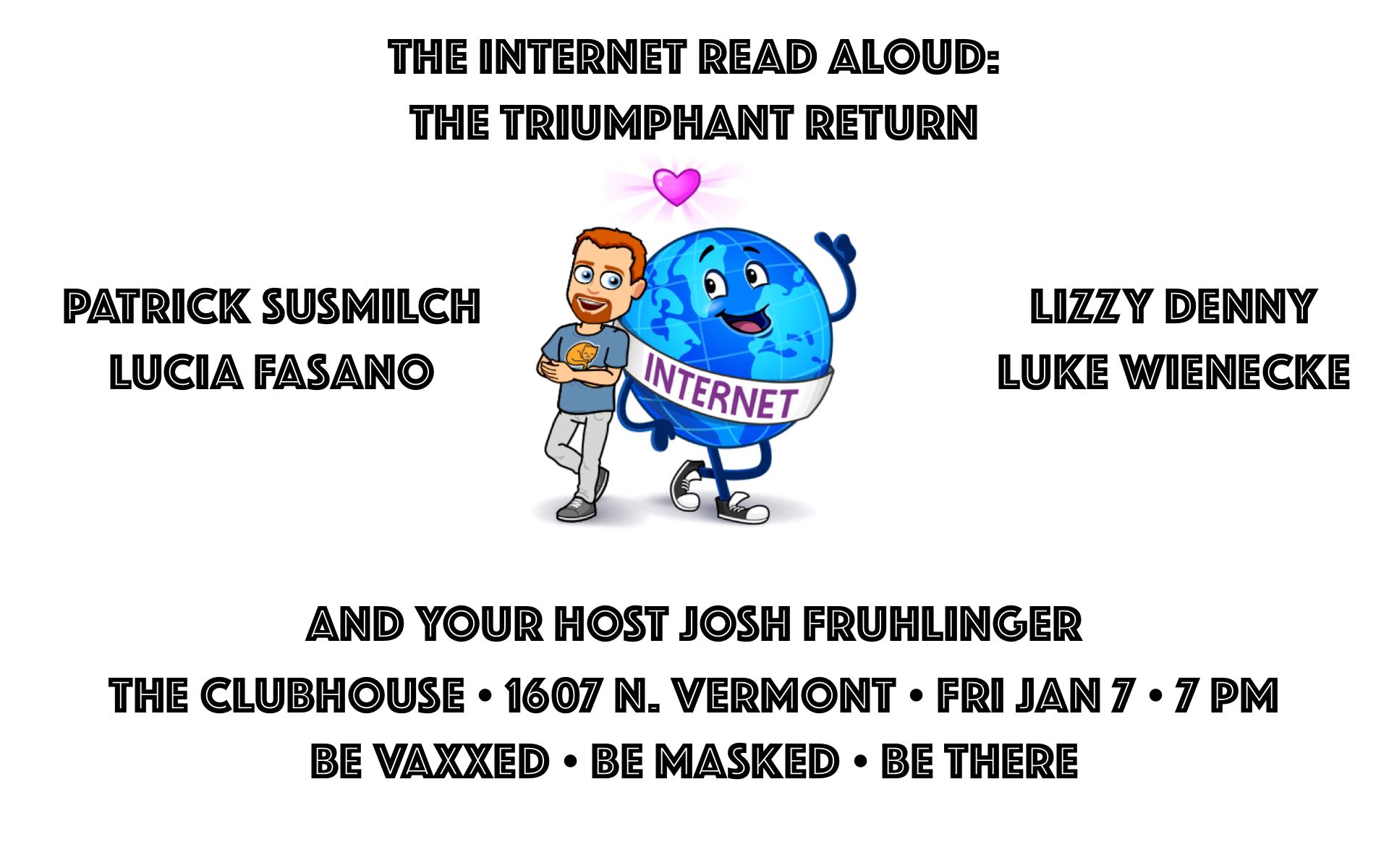 Here is the Facebook event! I would love to see you there to tell jokes to your face!

But until then, our laffs will come from this comment of the week:

“But where the hell are Dennis’s parents? Aren’t there usually adults in line with the kids, to provide properly shocked reactions to the saying of darndest things? Have these children simply been handed over to Santa as some sort of tithe? I mean, this would explain why Santa is responding with the facial expression of one of the classier Borgias. ‘This one … ceases to amuse. Remove him.’ [screams, clanking of irons, whimsical jingle bells]” –Skedastic

These runners up are also very funny!

“Too often our holiday-obsessed government holds us down with bureaucratic red tape and restrictions like Santa clauses. Better to let the gift-giving free market self-regulate with laissez tooth-faire.” –jroggs

“There is something truly disturbing about the way that Dustin’s dad says ‘We have a whole house.’ That’s right folks: those two are fucking in every room, on any available surface, just to check it off their sick list. The real danger comes when the list runs out.” –pugfuggly

“Santa Claus is the great Leviathan, the symbol of chaos and envy, yet also of unity, inspiring fear in humans and providing the undergirding of a society riven by factionalism and competition for scarce goods? It’s unusually deep waters for Henry, Alice and their offspring, but A+ philosophizing from a high school student. It will all be undone once Dennis finds out Saint Nicholas is the patron of pawn brokers, though.” –pastordan

“The word ‘Fragile’ under an arrow pointing at Dennis’s dad leads me to believe that Henry will be crumpled on the floor weeping before the night is over.” –Pozzo

“Doc Pritchard doesn’t bother to instruct Snuffy to keep it dry while bathing, it’s only on for three weeks.” –nescio

“I know there are any number of activities, all of varying shades of illegality, that Snuffy could have been engaged in when he broke his arm, but the part of me that loves dramatic symmetry prefers to believe he was caught cheating at cards.” –TheDiva

“Of course Rex is swearing. If this story goes viral, everyone’ll know Sarah’s his daughter, his daughter whose face only a mother could love. Not him. He’s her father. He doesn’t have to love that face. No one can make him.” –Baja Gaijin

“Viral? That sounds like one of those pesky facts they kept pushing on me in med school… think, Rex, THINK!” –DevOpsDad

“I’ll bet that’s exactly the sort of calculating look the real Hank Ketcham would direct at his real son. ‘Your insolence could be … very profitable. Very profitable indeed.’” –Tom T.

“‘If my luck holds,’ the hit-man thinks, ‘like on that Little Mermaid job. All I had to do was wait until she got transformed into a human, and she was like a fish out of water! Heh, heh, heh. No wait, am I thinking of shooting fish in a barrel? Whatever. Point is, she’s dead.’” –Peanut Gallery

“‘Ya know,’ Nu-Frankenstein thought bubbled, ‘if we just hired a normal looking palooka who didn’t have a horrible deformity or dressed like murder clown or whatever we could get him some clothes from Old Navy or wherever people without tailors buy their t-shirts and he could probably just walk up to Dick and shoot him in the back. Dick would never see it coming, what with him not looking like a mummy who escaped from the museum.’” –jerp+jump

“The Dick Tracy exhibit at the Neo-Chicago Main Library appears to have been curated by Quentin Tarantino. From the lurid colors to the floral blood spatters, the bass-heavy music overlaid with interviews with gravely voiced villains, it brings first a headache, then nausea, and finally surrender. Surrender to the violence of the state. But the last room, dark and quiet, merely lists the names of those shot down by Tracy during his storied career, and the viewer is left to ponder: what did these deaths mean? Is Neo-Chicago safer with these malformed souls in the dirt and not the streets? Are we, the public and taxpayers that permit such violence on our behalves complicit, nay, culpable, in Tracy’s reign of fascist police violence? And therein lies the genius of the piece. Sadly, it was shut down this morning by Tracy, who shot the head librarian, calling him ‘Book Face.’ Three stars.” –Voshkod

“Is no one going to address that Tater is clearly an old man posing as a baby in some sort of Looney-Tune-esque scam. It has been 87 years, why is nobody saying anything.” –Dan

“Hi, remember me? I’m Rocky, the Beetle Bailey supporting character whose gimmick is that he’s into that newfangled rock music. I believe my pompadour and sideburns will corroborate my identity, but if you need further proof, I invite you to look at my novelty underwear. Hey hey HEY! I said look at!” –Joe Blevins

“Dear Mom and Dad, I have no money for a cellphone plan or internet access and I am reduced to writing on paper. The stamps were a gift from Plato, whose podcast is sponsored by stamps.com.” –Ettorre

“If you have one of the few comic strips that are still run in newspapers, you have to keep thinking of fun suggestions for why anyone would still want to buy newspapers, including dumb kids’ craft projects requiring old newspapers.” –lorne

“Crankshaft playing Santa in Lillian’s book store, that’s an interesting choice from a business perspective. I barely understand how she stays afloat in the first place, I can’t imagine she’s getting a ton of foot traffic to her obscure suburban location. So I guess, yeah, I can see why she would try to take in a little extra on the side by letting Crankshaft’s family pay her to keep him busy for a few hours every day.” –BananaSam