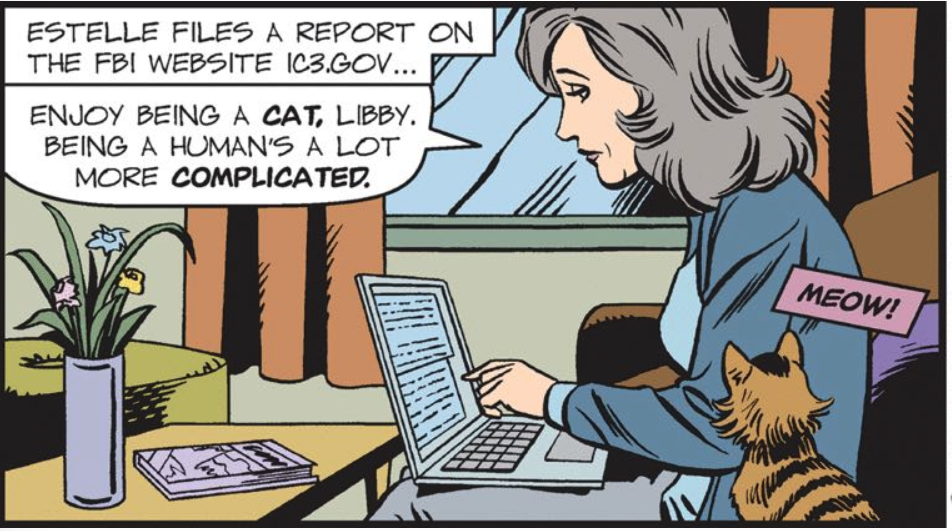 Folks, it’s true: being a human is more complicated than being a cat. For instance, what if we see something terrible on the internet? A cat doesn’t even know what the internet is, so they don’t have to worry about that. But humans need to decide whether we’re going to report it to the FBI at IC3 dot gov, or just go to the Internet Read Aloud, my beloved live comedy show about the internet, to see if we make fun of it! And that show will be happening tonight, at 7 pm at the Clubhouse at 1607 N Vermont Ave in Los Angeles, so you should come to it, if you can! Bring a mask and proof of vaccination and we’ll have fun!

Also, if you like the radio, but also on the internet, you might want to listen to me on the Follow Friday podcast, talking about my favorite Internet people! Wow, what a rabbithole of internet this post has turned into! Don’t worry, though, this week’s comment of the week is wholly offline (and very funny):

“The writers of Dennis the Menace have decided they are never winning over the ‘Calvin Pees On Ford/Chevy Logo’ bootleg pickup truck decal market, and are pivoting to the smaller ‘Calvin Prays At The Cross’ bootleg minivan/SUV/crossover decal market.” –Philip

The runners up are also funny!

“Sure … I remember him … he’s quite OLD. And UGLY too! And, boy, I’ve never met anyone so DUMB, and I live [drops to a whisper] we’ll discuss it later.” –Handsome Harry Backstayge, Idol of a Million Other Women

“Huge respect for the realistic assessment of Rene’s popularity as a villain. ‘I’ll be back! Or not! We’ll play this one by ear!’” –Dan

“Mr. Wilson’s cataracts are so severe that even he doesn’t know what he’s watching, and Dennis isn’t about to give him a clue.” –Pozzo

“I don’t mean that he stopped exercising the day he was born. He actually stopped just a few months ago. But when he did, I tracked down his birth certificate and wrote that day’s date on it. This is the kind of elaborately cruel thing I have to do to keep this marriage interesting.” –Joe Blevins

“Slightly worrying that over 14 years, Dr Blog has gone from being a short pasty white guy to a tall bearded brown-skinned man. Is one of them an imposter, or is Dr Blog an inherited secret identity like The Phantom?” –Schroduck

“Another one of the many, many things I love about Gil Thorp is the insights it gives me, a man with no children, into youth culture. Apparently kids say ‘mopes’ now! This sounds unlikely, but my coworkers with teenagers swear to me that they are bringing back mullets, so I will believe literally anything anyone, Neil Rubin included, tells me about high schoolers.” –Drew Funk

“I love how Bearman seems to be really struggling with this phrase. ‘So, is there a baby in the oven, then? Did … did someone fuck my oven?’” –pugfuggly

“Crankshaft’s female relative (name and relation unknown, as in I personally refuse to remember or look her up) smiles in the last panel because Crankshaft’s stupid-ass suggestion about overdosing on brain medicine has sparked a fond remembrance of the Bradley Cooper film Limitless, a film where Bradley Cooper takes a magic brain pill that makes him limitless.” –The Great Joe Bivins

“After the ambush, it was just Beetle and his backpack buddy left. But the backpack was smart, and cruel, and commanding, and Beetle wisely listened. After a six-month one-man war in occupied territory, Beetle and his backpack full of severed ears finally made it back to Allied lines. The brass wasn’t sure if they should pin a medal on his chest or court-martial him his war crimes. They split the difference, giving him the Silver Star (he demanded that they pin it on the backpack) and drumming him on a psychiatric discharge. So they hit the road, Beetle and backpack, walking the byways and highways of America, always looking for more ears to take, more enemies to kill.” –Voshkod

“I like the subtle juxtaposition between Gregg sweating over a pop quiz in darkness while his parents imagine a CEO who’s uneducated but ‘at least he’s reading something!’ Education is for suckers, son, but you won’t hear that from us.” –Spunky The Wonder Squid

“This story doesn’t need a plot. It’s all about product placement. Moy and Brigman are raking in big bucks from VW for featuring Toby in her Bug, and for showing that the vehicle is crash-resistant even with an idiot behind the wheel, stylish and sporty for the middle-aged driver, easy to park, with luxury features like a sunroof and leather seats surrounding one in such a cocoon of comfort that even ridiculous crying jags over situations that are completely divorced from reality are an absolute pleasure, if you have them in the driver’s seat of a VW Bug! Get the ‘bugs’ out in your VW — you won’t be ‘bugged’ for long!” –Charterstoned