Kudos to FBOFW! Generally speaking, pop culture depictions of the first three years of any human’s life are shown through some sort of rosy, gauzy filter, depicted as a nonstop cavalcade of pure unadulterated love and hugs and family togetherness and candy canes and happy happy oogie woogies boo boo bean. Too often left out are the crapping and the puking and the screaming and the screaming and the OH MY GOD THE SCREAMING MAKE IT STOP MAKE IT STOP. I mean, I know about this stuff and I don’t even have kids. But too often if you bring any of this up, especially if someone who has chosen to bring forth precious new children into this vale of tears we call “life,” you get accused of hating children in general, of hating your interlocutor’s children in particular, and of hating America.

Fortunately, our friends the Pattersons have already proven their hatred of America by their insistence on being Canadian, so FBOFW can depict the non-Ann-Geddes-little-angel side of toddlerdom with impunity. Though good taste has prevented them from taking on the feces and the vomit, they’ve tackled the screeching with gusto. Fortunately for our protagonists, in the strip after this Michael and Deanna were offered rent-free use of the apartment above them by their landlord (more proof of Canada’s capitalism-spurning anti-American hate). But at least we got to see them get close to the breaking point, which wouldn’t happen in, say, Marvin, even if they don’t actually snap.

Apartment 3-G’s Mim, who recently declared that her baby-sitting experience has, like, totally prepared her for motherhood, is clearly someone who needs to be reading this strip. Her rendezvous with Chuck is inching forward ever so slowly, but I thought this exchange was worth reproducing: 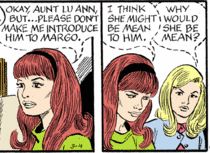 Why would Margo be mean? Um, Lu Ann, where have you been? She doesn’t need a reason — she’s Margo!