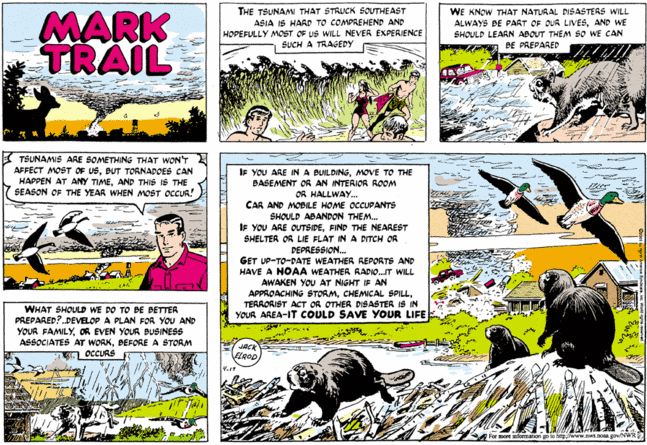 Apparently last week’s killer tsunami was only the beginning of the Mark Trail carnage. This week the focus is on tornadoes, but the topic has really broadened to nature’s wrath in general. And what do we see here? While the puny humans have their seeming superiority stripped away by the awesome power of the winds and rain, the wild beasts, long tormented by mankind, gloat at the carnage wreaked upon their bipedal oppressors. The squirrel in panel three looks positively gleeful about the car being swept away in the flood — perhaps he saw too many of his nut-gathering friends crushed to death beneath its cruel tires! The beavers in the last panel, meanwhile, seem to be taking a more philosophical view of the twister as it tears the wooden homes of men to bits: they seem confident that their dam will make it through the storm, but don’t mind taking a moment out of their busy schedule to watch the plans of their rivals come to naught. The only animal to look panicked by the situation is the dog in the lower lefthand panel — and we all know what happens to collaborators and Uncle Toms when the revolution comes, don’t we? It looks like Mark is trying to get in good with the majestic flying geese and ducks in anticipation of the imminent nature-driven apocalypse.