Sadly, it looks as if the current painfully stupid storyline in Mark Trail is going to be resolved not by Mark’s quick fists and utter disregard for the constitutional rights of the accused, but by his tedious and pedestrian knowledge of natural phenomena, which in this case has been augmented by his ownership of a mail-order magnifying glass. Gosh, them magpies sure do like shiny things! Thank goodness they’re probably just flying in great squawking flocks around the collar, rather than, say, picking it up and hoarding it in a nest somewhere. If there were any justice in this world, the birds would be laying an elaborate trap for Mark, luring him to the distant clearing, far from human help, before descending on him and visiting a horrible, painful death upon him with their razor-sharp beaks. The freakishly large woodland animals would look on in silent approval in the foreground.

Meanwhile, check out the funky shading on Mark’s manly, rugged jawline in panel one. Compare to the faces of the dead-eyed zombie sherriff and the insane old hermit from earlier installments:

Looks like somebody got some kind of Acme Shadow-Drawing Kit™ for Christmas!

In shameless hucksterism news, Mike Donovan, who was one of the very first people to ever link to me, is TCC’s latest merchandise model: 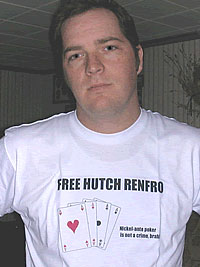 Don’t let the visible creases dissuade you from buying this high-quality item of clothing, folks: they come out with just a few hours of vigorous ironing.