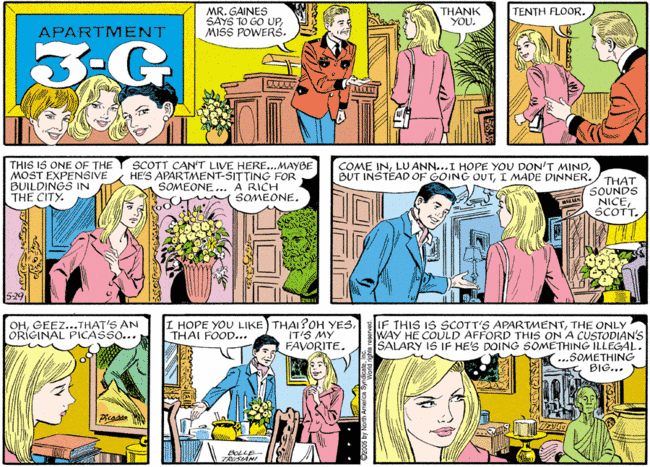 You’ve already had your fun with it, but I can’t not say it. Ascot ASCOT ASCOT! Holy crap, Janitor Scott’s wearing an ascot. And I don’t know what the deal is with his collar, but it makes him look like less like a rich guy and more like a rich vampire.

Now, some of you may doubt that Scott would just lounge around his opulent Manhattan digs wearing an ascot. Isn’t it a little formal? Wouldn’t a purple silk smoking jacket be more appropriate? Well, ignoring the fact that he’s dressing to impress a date, I offer a data point for you. A few years ago, I got bumped up to business class on a transatlantic flight. In addition to spoiling all other forms air travel for me for life, this experience brought me face to face (well, more like back-of-head to face, since he was sitting behind me) with a member of the entrenched economic elite, who was — and I’m not making this up — wearing a red polka-dotted ascot, deck shoes, a white shirt and white pants, and a jaunty sailor’s hat, much like the one sported by the Skipper on Gilligan’s Island. It was as if he expected to step directly off the jetway at Dulles and onto his enormous yacht. Now, I don’t know about you, but I usually find air travel so unpleasant and uncomfortable that I try to wear clothes that are as comfortable as possible, meaning that I’m generally decked out at one step above hobo status. Thus, I can only conclude that rich people find ascots comfortable. And so the fact that Scott has casually slung one around his neck here makes perfect sense to me.

What doesn’t ring true is the notion that Ascot Boy, with this modern decorator’s nightmare of an apartment, chock-a-block with Picassos and busts of Herodotus and Buddha and stately paneled doors and Second Empire mirrors and what not, would choose to cook Thai food for his date. I mean, first, obviously he would have his manservant do the actual cooking; and second, the only kind of food that would go with this apartment would be fine French cuisine or something English and bad for your heart, not some vulgar concoction from heathen Siam.